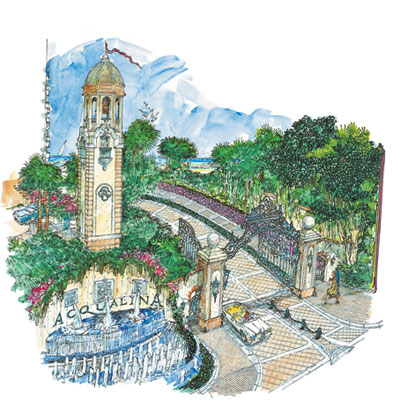 By design, Acqualina, the Rosewood resort scheduled to open in February 2006 in Sunny Isles, Fla., will be all wet. The resort’s name represents a fancifully loose translation of the Italian word for “water’s edge,” and with several fountains, three pools, and 400 feet of Atlantic Ocean coastline, the property will offer an abundance of aqua. Located 19 miles from Miami International Airport and 14 miles from Fort Lauderdale Hollywood International Airport, Acqualina will be Rosewood’s first Florida property and its first venture in North America since opening Las Ventanas al Paraíso in Los Cabos, Mexico, in 1997.

Acqualina’s 51-story tower, partially painted in Florentine yellow, will contain 54 rooms, 43 suites, and 188 residences (all of which have been sold, and 15 percent of which had been resold by late June). Every guest room will have a terrace and will overlook the water: the Intracoastal Waterway, the Atlantic Ocean, or both. The most spectacular suite will be a 6,400-square-foot space on the 45th floor that will include three bedrooms (one of which can serve as a media room), a grand piano, a wet bar, a full kitchen, a bathroom with a whirlpool tub for two, and a 4-foot-deep pool measuring 151¼2 by 20 feet.

An outpost of Il Mulino New York, the 24-year-old Italian restaurant, will serve as Acqualina’s main fine dining space. The resort also will open a 25,000-square-foot, two-story spa that contains 12 treatment rooms, a Jacuzzi, and, of course, a pool.  —sheila gibson stoodley