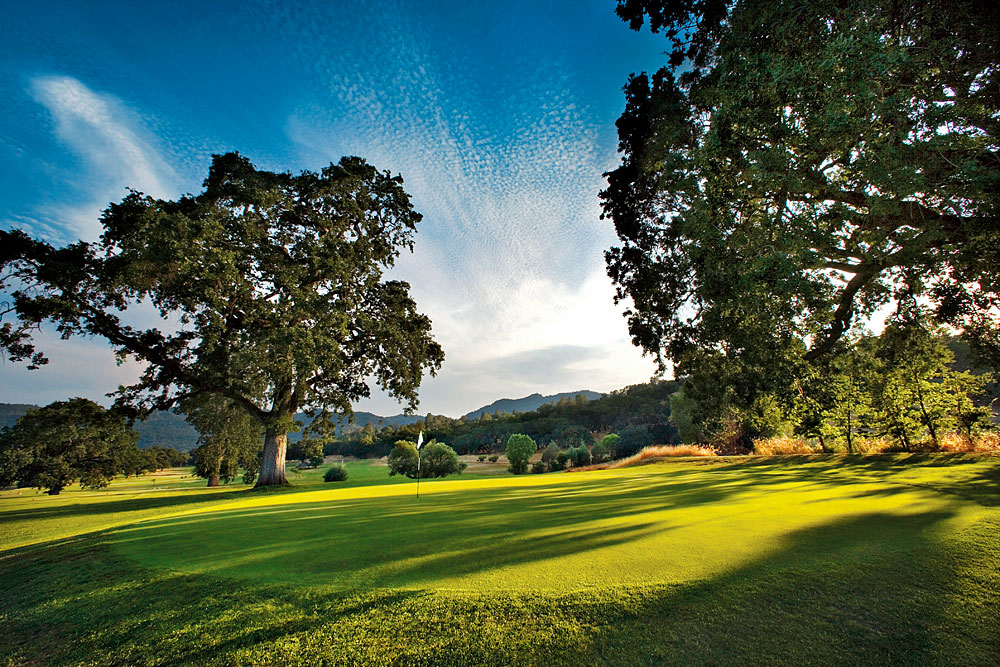 In a mining project in Napa County’s Pope Valley struck pay dirt of another kind: a natural hot spring. The owners rewrote their business plan, constructing a lodge on the 700-plus-acre property over the next several years. Soon, well- heeled San Franciscans began to make the 80-mile journey to the Aetna Springs Resort to enjoy its ample amenities, which included, by 1891, a nine-hole golf course—the first course west of the Mississippi.

Aetna Springs—whose main buildings were designed by architect Bernard Maybeck, a graduate of the prestigious École des Beaux-Arts—flourished well into the 20th century as a Hollywood hot spot. But in the years after World War II it began to decline, and in the early 1970s it was sold and eventually closed.

Today, a new group of prospectors is mining the property’s immense potential. “We were made aware of the old Aetna Springs project,” says Robert Radovan of Criswell Radovan, the St. Helena, Calif.–based developers responsible for Calistoga Ranch. “It’s the last use permit where a resort can be built within what’s known as the Napa Valley appellation.”

But the permit was hardly Aetna Springs’ only asset. Its historic golf course (still relatively intact), rich atmosphere, and location—in the heart of California’s most acclaimed wine country—presented an absolutely unique set of circumstances for creating a members-only luxury resort. And so Radovan and his partner, Bill Criswell, assembled a dream team of additional partners to develop their dream opportunity. Billy Getty, an environmental and preservation expert, has taken responsibility for preserving Aetna Springs’ historic sense of place, as well as its natural beauty; Michael Mondavi, a cofounder of Robert Mondavi Winery, is overseeing the development of the wine program with Laura Catena of Argentina’s Catena Zapata; and internationally acclaimed golf designer Tom Doak has applied his talents to the renovation of the historic course, which reopened this past June.

The most exciting news for 2009 is the anticipated completion of the winery, which will operate under the direction of Rob Lawson, winemaker at Pavi and former CEO of Napa Wine Company. Radovan expects the announcement of several additional members of the winemaking team, all associated with some of Napa Valley’s most sought-after boutique wines. “These are three or four of Napa’s greatest,” he says, “whom members can work with to make their own wine.”