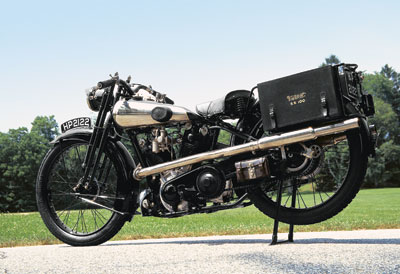 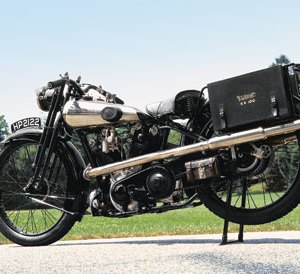 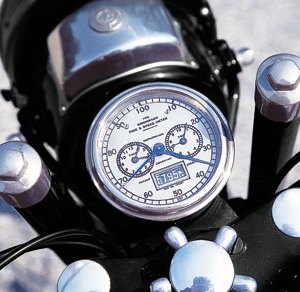 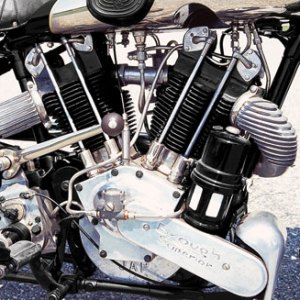 English motorcycle manufacturer George Brough (pronounced bruff) would not permit a Brough Superior SS100 motorcycle to leave his possession until he could guarantee that it would achieve a speed of at least 100 mph. If an SS100 machine failed to reach this benchmark, he would return it to his Nottingham, England, workshop for adjustments. The vehicle’s price reflected the work that went into ensuring its high performance, but such quality also helped establish the brand’s reputation as the Rolls-Royce of motorcycles.

Brough founded his company in 1919, but it essentially ceased operating in 1940, when the British government repurposed the factory for wartime production. It is believed that about one thousand of the 3,200 motorcycles that Brough built have survived. Among the most significant of those is George Brough’s own 1925 Alpine Grand Sports SS100, which he rode in the 1925 Oesterreichische Alpenfahrt, or Austrian Alpine Trial, an eight-day race then considered the most grueling challenge for a motorcycle. Brough suffered a minor spill during one 10-mile stretch of the race but nonetheless collected a few gold medals for his performance during the trial.

Michael FitzSimons, a Connecticut-based consulting engineer and motorcycle consultant for Bonhams & Butterfields auction house, acquired the Brough Superior sight unseen in 1982 from an Indian Army officer. FitzSimons’s scrupulous restoration consumed four years, during which time he made several trips to England to locate the proper Brough parts to replace those that were missing or irreparably damaged. “I wanted authentic pieces, and they are not available in America. I had to find a tire pump, and it had to be from 1925, no later,” says FitzSimons. “This [motorcycle] had to be absolutely perfect.” Brough never saw fit to publish an owner’s manual or a parts list for his machines, making FitzSimons’ task that much more challenging.

Restoring a Brough Superior SS100 to its 1925 state would satisfy most collectors, but FitzSimons was determined to find proof that placed its unique provenance beyond doubt. That project took five times as long as the restoration of the vehicle. FitzSimons amassed photos, newspaper clippings, and a typewritten letter from Brough chief engineer Harold Karslake that discusses the creation of the motorcycle, before he found the most unimpeachable document: the International Traveling Pass that permitted Brough to travel with his motorcycle to Austria to compete in the 1925 trial. “That positively cinches the provenance of the bike,” FitzSimons says. “It took me 20 years to find. That [document] ended my quest.”

With the motorcycle, you will receive an original 1925 Brough sales brochure, several copies of photos of Brough with the machine, a copy of Karslake’s typewritten letter, and the original International Traveling Pass that Brough used to attend the 1925 race.

Two tool kits that contain British tools of the period also come with the vehicle. One normally sits below the exhaust pipe on either side of the motorcycle. The pair of large boxes that straddle the back wheel are traveling valises.

The license plate bears number 2122, which Brough applied to all motorcycles that he rode.

FitzSimons says the Brough factory produced fewer than 382 SS100s, and of those, 206 still exist.

The price excludes the cost of vehicle transport and delivery.