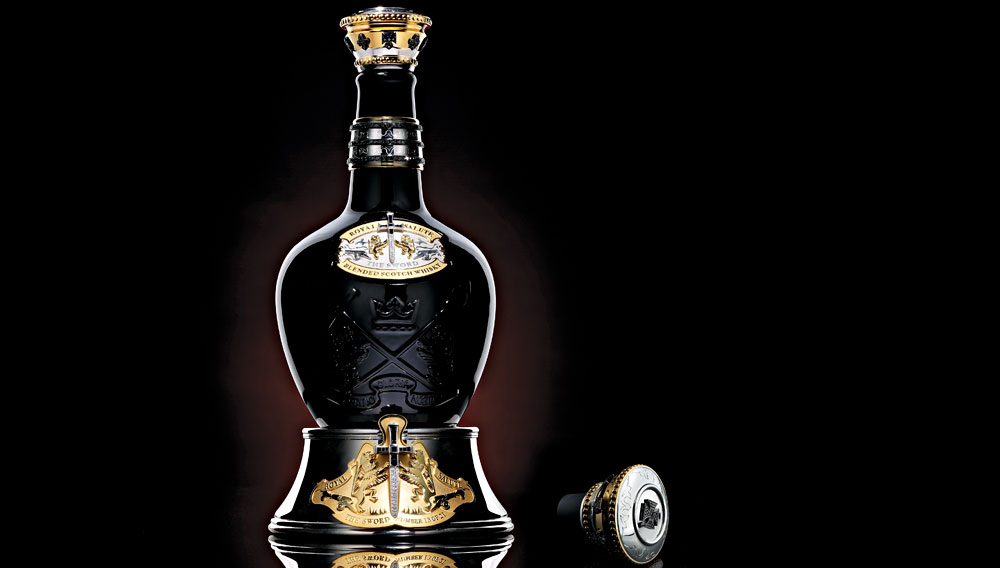 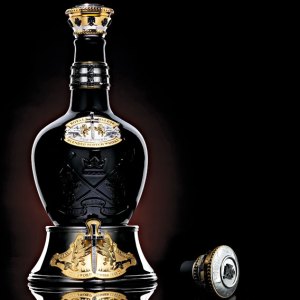 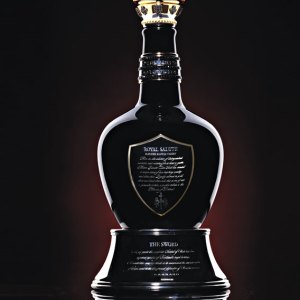 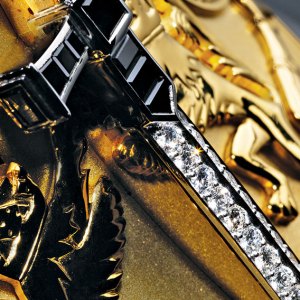 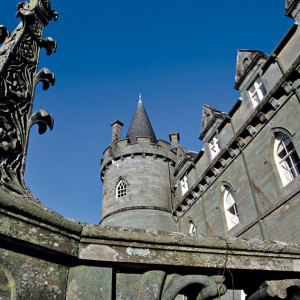 Some of Scotland’s richest and rarest whiskies are found in Royal Salute, a series of limited-edition and permanent-expression prestige blends that Chivas Regal—which received a royal warrant during the reign of Queen Victoria—launched in 1953 to honor the coronation of Queen Elizabeth II. But the most elegant release of Royal Salute is also the most recent: Tribute to Honour, which is inspired by the Honours of Scotland, the oldest crown jewels in the British Isles. First used in 1543 at the coronation of Mary, Queen of Scots, and now housed in Edinburgh Castle, the Honours of Scotland consist of an elaborately jeweled crown, scepter, and sword. Garrard of London, the world’s oldest jeweler (established in 1735), interpreted each of these three national treasures to create ornaments in gold, silver, and black and white diamonds to embellish the 21 porcelain flagons that house Chivas Regal’s latest limited edition. Workers at the French firm of Revol, founded in the 18th century, produced more than 600 castings to obtain 21 perfect decanters of hand-cast and hand-fired white New Zealand clay, and each of these extraordinary bottles contains a liquid every bit as brilliant as the 413 flawless diamonds that decorate its exterior: The Scotch whisky within is a secret blend of whiskies aged in ex-bourbon barrels and sherry casks, none less than 45 years old.

At $200,000 per bottle, Tribute to Honour is the most expensive Scotch whisky in the world; it is also certainly one of the rarest. Yet the flagon offered to the recipient of this gift will be rarer still, accompanied as it is by a pair of toasting goblets specially designed for Robb Report by Garrard creative director Stephen Webster. Fashioned of sterling silver with a yellow-gold-plated interior, each drinking vessel features a beaded gold surround and heraldic elements from the Honours of Scotland depicted in black-diamond pavé.

The journey to claim this prize will be as royal as the whisky itself. The recipient and a companion will begin their six-day sojourn by private jet from the United States to Edinburgh, Scotland. There they will be met by Royal Salute brand director Neil Macdonald, who will escort them to the five-star Scotsman hotel—where they will stay for their first night—and over a dram or two at lunch, share with them the story and heritage of Royal Salute. Afterward, the guests will visit Edinburgh Castle, where historian Chris Tabraham will conduct a personal tour that illuminates the unique role that the Honours of Scotland play in that nation’s culture.

The recipient and guest will spend the next day in Keith, where they will stay in Pernod Ricard’s stately manor, Linn House. Chivas Regal master blender Colin Scott will meet them for a tour of nearby Strathisla Distillery, where they will be allowed into the Royal Salute vault for a private, straight-from-the-casks tasting session. Back at Linn House, Scott will guide them through a tasting of all Royal Salute expressions, including the two key components of Tribute to Honour. Following this experience, the guests will enjoy a traditional Scottish dinner, complete with bagpipes and the addressing of the haggis.

For the next two days, the recipient and companion will be the guests of the 13th Duke of Argyll—Torquhil Ian Campbell, chief of the Clan Campbell—and his family at Inveraray Castle, their ancestral estate on Scotland’s west coast. From there they will travel to London for an intimate, behind-the-scenes look inside Garrard, where creative director Webster will explain the intricacies of fashioning the Tribute to Honour flagon.

That evening, after settling into the Royal Suite at the Ritz London, the recipient and guest will enjoy a private dinner prepared by executive chef John Williams. After the meal, the recipient will be presented with his or her personal Tribute to Honour flagon and one-of-a-kind goblets.

The fortunate recipient will spend the sixth day of the journey in London before returning to the United States by private jet, thus concluding an experience that is truly a tribute to one of the finest whiskies in the world—and certainly an honor for any Scotch whisky enthusiast.

This gift is available to a single Robb Report reader through the end of 2012, as long as one of the Tribute to Honour decanters remains available for sale. The gift includes travel and accommodations for the recipient and one guest. The timing of the gift is subject to the schedules of the Duke of Argyll, Chivas Regal master blender Colin Scott, and Royal Salute brand director Neil Macdonald, as well as to the availability of Linn House and the luxury suites at the various hotels listed. Should any of the luxury suites become unavailable during the recipient’s preferred travel dates, mutually agreeable substitutions may be made. The gift includes all duties and taxes on the Tribute to Honour decanter and goblets.