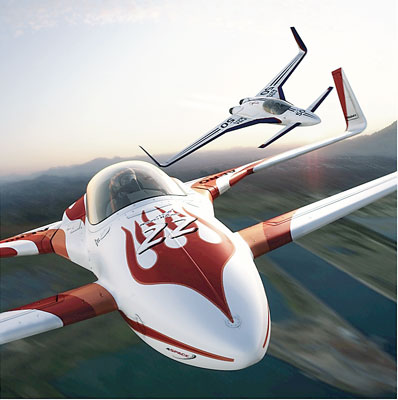 A customized Mark-1 X-Racer rocket and the first Mark-2 X-Racer, which will succeed the Mark-1.

A Rocket Racing League team, with two racing rockets, a truck and trailer equipment to transport the team rockets, and a customized hangar.

A home flight simulator and a gaming system that will enable players to race virtually alongside the pilots.

It always is a challenge building a following for a new sports league, one that has yet to develop any superstar players or teams with glorious histories. Even more difficult is creating a fan base for a new sport. However, the architects of the Rocket Racing League (RRL) have a product that promises to command attention immediately. As noted in the Private Preview feature in Robb Report’s October issue, beginning in 2007, the RRL racers will pilot genuine rockets around courses that will be superimposed on the sky by video screen graphics. The pilots will rely on cockpit graphics systems that will delineate the contours of the course.

League officials say the debut race could be held as early as August. The site of the first race has not been selected, but at least one will be held in Las Cruces, N.M., home of the RRL’s headquarters. The league expects to hold four to six contests next year, and it plans to institute a 10-race schedule in 2008.

Powered by liquid oxygen and kerosene, the Mark-1 X-Racers, with flames shooting out of their tails, will streak along at speeds from 250 to 280 mph. (The rockets’ maximum velocity will be 320 mph.) Each of the vessels will be built from advanced composites, have a 29-foot wingspan, measure 19 feet long, and weigh only about 3,000 pounds when carrying a pilot and full fuel tanks. When it is empty and prepared for transport, a rocket will weigh 1,200 pounds or so. Eventually, the Mark-2, a rocket that is being created for the league expressly, will succeed the Mark-1, a vehicle that is derived from an existing, albeit highly modified, airframe to permit the RRL to launch the sport now.

RRL vice president of technology Michael D’Angelo cannot reveal much about the Mark-2—it and other league-specific issues, such as how engineers can safely refuel the rockets’ liquid oxygen tanks in fewer than 10 minutes during pit stops, are proprietary—but he says that the Mark-1 and the Mark-2 “will be radically different in looks and performance.” Also, he and other RRL officials say that the vessel pictured on page 222 is a prototype vehicle that does not closely resemble the Mark-1 X-Racer. D’Angelo says that while both the prototype and the Mark-1 are aero-canard designs (a type of aircraft that is stabilized by a pair of canards, or small winglike protrusions at the front of the vehicle), the Mark-1 “will be larger in every aspect,” will have gullwing doors, and will be “wider, faster, [and with] more power.”

This gift’s Mark-1 will have a pair of side-by-side seats; the optional features will include leather upholstery, gold-trimmed accessories, and a stereo system. The rockets that your racing team will employ will be more utilitarian. The racer’s cockpit will accommodate one person, and the parachute that the pilot will wear on the back of his flight suit will double as seat padding. (As noted, the Mark-2 is still in development and may not be ready until 2010.) If the history of automobile racing is any guide, these machines could prove immensely valuable—the Bentleys or Bugattis of the 21st century, perhaps.

The Rocket Racing League will demand finesse as well as speed from its pilots. Each race will take place in a 2-mile-long, 1-mile-wide, 1-mile-high area called the engagement box. It will last from 60 to 90 minutes and will include several pit stops. A full tank of fuel will provide 10 minutes of flight time, six minutes of which will be spent gliding. The winning rocket likely will be the one whose pilot best manages the energy it generates during the four-minute boost stage. “In addition to being a really aggressive race, it’s a thinking man’s game,” says RRL vice president of technology Michael D’Angelo.

The owners and head pilot for the first official RRL team, Leading Edge, all have Air Force ties, and Jim Bridenstine, the pilot-owner of the second team, named Bridenstine, is a Navy man who has logged 1,500 hours in F-18s. “This is not only conserving energy, this is optimizing speed at the same time,” says Bridenstine, who is a Hawkeye weapons and tactics instructor with the Naval Strike and Air Warfare Center in Fallon, Nev. “This is like nothing we’ve ever done before, including the Air Force guys.”