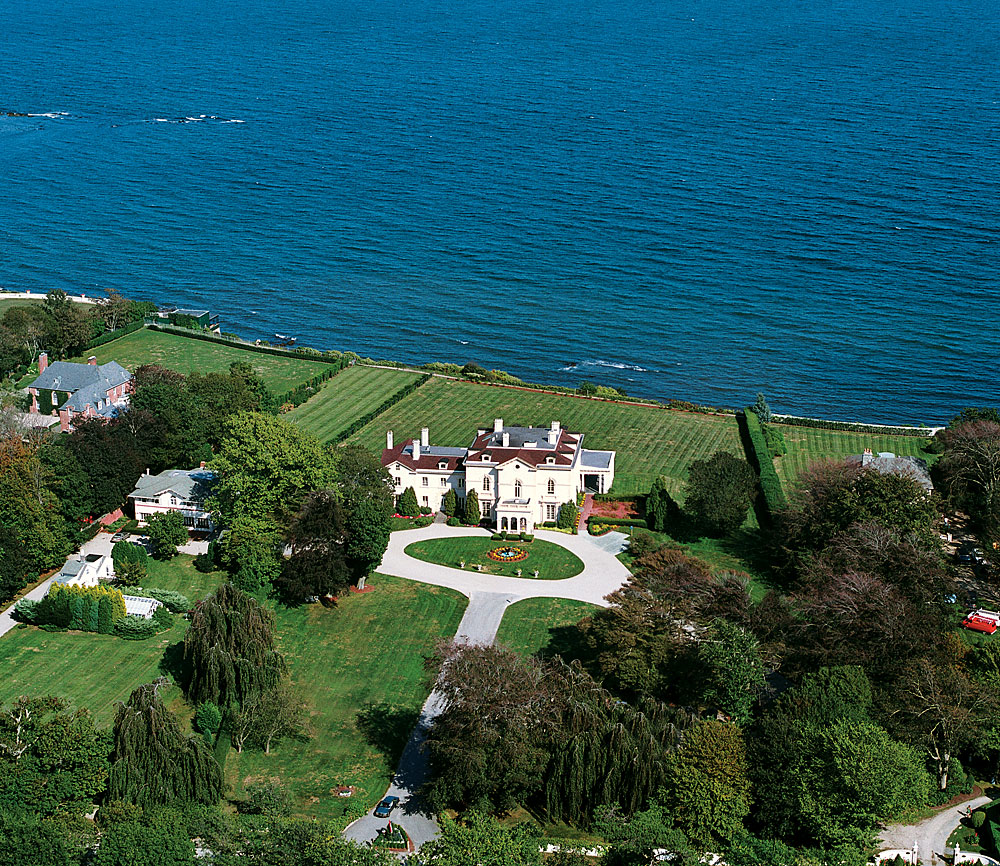 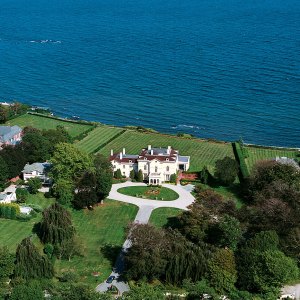 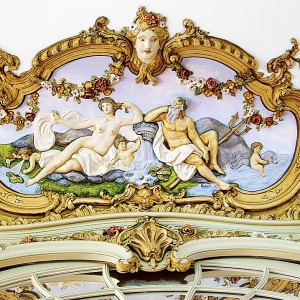 Matron of Manhattan high society Caroline Webster Schermerhorn Astor changed the complexion of Newport, R.I., when she began summering at Beechwood in 1881. “She made Newport,” says Robert Milligan, the current owner of the 15-bedroom, eight-bathroom, 19,000-square-foot mansion. “If you look at maps from the early days, there wasn’t anything around here. She’s really responsible for bringing American society to Newport.”

William Backhouse Astor Jr. purchased Beechwood in 1880 as an anniversary gift for his wife. He paid $190,941.50 (roughly $3.9 million in today’s dollars) for the then-29-year-old mansion. He spent the equivalent of $41 million more on its refurbishment, hiring architect Richard Morris Hunt to redecorate the entire home and add a 37-by-57 ballroom that faced the Atlantic Ocean. The finished house contained 39 rooms. The Astors retained the home’s original name, which referenced the five varieties of beech trees that grew on the nine-acre grounds.

Caroline spent parts of the next 25 summers at Beechwood before ceasing her visits in 1906 because of her failing health. Her presence in Newport encouraged the Vanderbilts and other prominent Gilded Age families to build their own grand homes on neighboring lots along Bellevue Avenue, which came to be known as Millionaires’ Row.

Beechwood may not have been as lavish as some of Newport’s mansions of later vintage, but it hardly was austere—even if Caroline wanted visitors to think that it was. Milligan explains that the fireplace in the morning room, the space where guests waited to learn if Mrs. Astor would grant them an audience, is made of wood instead of marble because “she didn’t want to appear ostentatious.” However, the fireplaces in the four bedrooms on the second floor all are made of marble, and the parlor adjacent to the morning room is decorated with blue-and-white Wedgwood-like panels that were designed and built in France.

The Astors flaunted their wealth in the ballroom, which features more than 800 mirrors and panes of glass that fill the room with light. At night, that light comes from chandeliers laden with teardrop-shaped pieces of Austrian crystal and brass sconces that resemble seaweed. Caroline opened her ballroom formally only once a season, for her Summer Ball, which she held on the third Monday in August. She fed her guests at midnight in an adjacent dining room, deeming the meal “perpendicular refreshments” because everyone ate while standing.

After the Astors’ grandson Vincent sold Beechwood in 1940, it passed through several hands and shed four of its nine acres before Milligan became involved with the property in 1981. Initially he was one of several investors in Beechwood, but gradually he purchased his partners’ shares until he became the sole owner in 2006. Over the years, Milligan and his partners added a new roof and new plumbing, installed air-conditioning, replaced the heating system, and updated the wiring.

Milligan says that he has placed Beechwood on the market because, contrary to the sluggish state of the real estate market at large, he believes the time is right. “There’s been a tremendous appreciation in real estate in Newport, and I don’t think it’s finished,” he says. “Newport is starting to become recognized as the jewel that it was when Mrs. Astor was here.”

You Don’t Need a Weatherman

Songwriter Cole Porter had an artistic breakthrough while lunching in Beechwood’s dining room on a rainy day in the 1920s or early 1930s. William McBrien included the story in his biography, Cole Porter (Alfred A. Knopf, 1998): “Mrs. [Helen] Astor is said to have remarked, ‘I must have that eave mended at once. That drip, drip, drip is driving me mad.’ Cole leapt up with a shout of elation on finding the perfect start of his lyric: ‘Like the drip, drip, drip of the raindrops.’” It became an opening line in “Night and Day,” one of Porter’s most enduring songs.

Born a Schermerhorn, a family that had resided in Manhattan since it was called New Amsterdam, Caroline Astor became concerned about the parvenus who flocked to her city in the 1870s and 1880s. Many of them, in her opinion, did not know how to behave. So she and Ward McAllister, a relative by marriage, decided who belonged. Astor and McAllister dubbed the chosen “the 400,” a number based not on the capacity of Astor’s Manhattan ballroom (an often-repeated myth) but on McAllister’s instinct. In The First Four Hundred: Mrs. Astor’s New York in the Gilded Age (Rizzoli International Publications, 2000), author Jerry E. Patterson quotes McAllister as saying, “If you go outside that number, you strike those who are either not at ease in a ballroom or else make other people not at ease.” Membership in the 400 meant you had reached the apex of Manhattan society and had become the 19th-century version of a celebrity. In Fortune’s Children: The Fall of the House of Vanderbilt (Quill, 1989), Arthur T. Vanderbilt II wrote that his distant relative Alva Vanderbilt forced Astor to admit her to the 400 by planning a ball that promised to be the event of 1883. Astor’s daughter Carrie practiced a complicated dance for weeks, expecting to perform it at Vanderbilt’s party. But the date approached, and no invitation came. When McAllister met Vanderbilt to discuss the matter, she said she could not issue Carrie an invitation because her mother had never paid Vanderbilt a social call. Trapped by the rules of etiquette that she had striven to uphold and by her desire to make Carrie happy, Astor visited Vanderbilt’s Fifth Avenue mansion and presented her calling card. This formal act of acknowledgment signified Vanderbilt’s entry into the exclusive club. Apparently, Astor forgave Vanderbilt for her gamesmanship. Morgen Balletto, the staff historian at Beechwood, says that in 1891, Astor told Vanderbilt that a plot adjacent to her own in Newport was available. Vanderbilt purchased the land and built her own mansion, Marble House, in view of Beechwood.