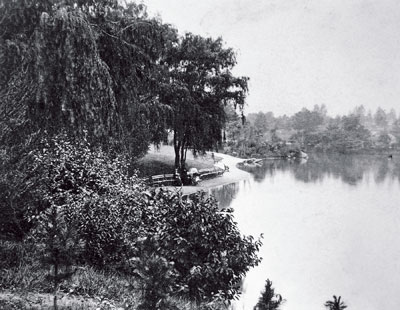 Perpetual care of the 550 endangered American elms that line the entire east side of New York City’s Central Park, along Fifth Avenue.

A plaque bearing your name will be placed in the park to commemorate your role in preserving the trees.

In 1930, Dutch elm disease (DED) reached the United States through a European shipment of elm logs and quickly spread to 41 states. The disease, which is carried by the European elm bark beetle, produces a gradual wilting and yellowing of the leaves, leading to the death of a branch and eventually the entire tree. The disease decimated the American elm population in just 20 years, and it continues to threaten those relatively few trees that remain.

In 1983, the Elm Research Institute, a nonprofit organization formed to replenish the American elm, began growing the American Liberty elm, which is actually a group of six genetically different species that all appear similar to the American elm but are resistant to DED. Indeed, less than 1 percent of the more than 250,000 Liberty elms planted throughout the country have contracted DED.

The original elm species now is rare, except in New York City’s Central Park. There you can find the country’s largest concentrated population of American elms, including a tract of 550 trees that stretches along the Fifth Avenue side of the park, from 59th to 110th Streets. This portion of the park also includes enough unplanted tree pits to hold another two dozen elms.

“Every town has an Elm Street, but they don’t have any elms,” says Doug Blonsky, president of the Central Park Conservancy, a private, not-for-profit organization that manages the maintenance and restoration of the park for the city. “We really do have an Elm Street, even though it’s called Fifth Avenue.”

The elms survived the DED epidemic, says Blonsky, in part because of the park’s location in the middle of Manhattan. “Central Park is an island within an island, so it gives us some buffer,” he says. “We caught some protection because we’re isolated.” But the buffer zone provided by the city and the rivers surrounding Manhattan have not completely immunized Central Park’s elms from the disease. Thus, since its inception in 1980, the conservancy has been battling DED by removing infected branches or entire trees and planting new ones in their places.

“Elms are very wide-spreading, with very long limbs that droop out,” says Neil Calvanese, vice president of operations for the conservancy, who first joined the organization in 1981 as a tree caretaker. “We have elms that are over 150 years old in the park. To prune a tree or to remove a tree [of that age], it’s a tremendous amount of work. We’re talking literally tons of wood.”

For $2 million, you can fund the maintenance of the Central Park American elms in perpetuity. The conversancy estimates that such a donation, if prudently invested, would generate $100,000 in revenue annually, enabling the organization to allocate ample funds for the care of the trees. The conservancy will recognize the donation by placing plaques bearing your name on boulders at both ends of the tract of trees or by installing a plaque at the park entrance of your choice.

At the turn of the 19th century, only about 60,000 people called New York City home, and the majority of those residents lived in lower Manhattan. During the 1830s, however, when 600,000 immigrants arrived in the United States, the city’s population grew to more than 300,000. That number continued to increase in the ensuing two decades, but by the middle of the 19th century, the majority of New Yorkers still lived south of 38th Street, primarily in crowded tenements.

To escape those oppressive conditions, many residents sought out pastoral settings such as Green-Wood Cemetery in Brooklyn, which proved to be a tranquil yet perhaps depressing place to spend an afternoon. Then in 1844, New York Evening Post editor William Cullen Bryant and New York Tribune editor Horace Greeley began lobbying city planners to set aside land for a large, centrally located public park. In 1848, Horticulturalist magazine publisher Andrew Jackson Downing joined the campaign, which finally proved successful in 1853, when the state legislature authorized the city to begin buying land between 59th and 106th Streets and Fifth and Eighth Avenues. (The park would be extended to 110th Street in 1863.) From 1853 through 1856, the city paid more than $5 million to the state of New York and to private parties to acquire the approximately 775 acres of undeveloped land that would become Central Park.

By the time the park was completed in 1871, more than 10 million cartloads of material had been transported to the site, including 500,000 cubic feet of topsoil from New Jersey and more than 4 million trees, shrubs, and plants (representing more than 1,400 species) from as far away as Europe and as nearby as Flushing.

Today, according to Jonathan Miller, head of the property-appraisal firm Miller Samuel, the value of Central Park’s real estate is about $529 billion.