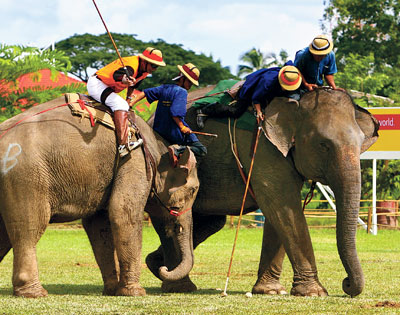 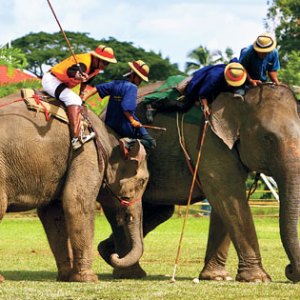 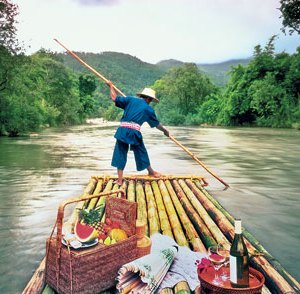 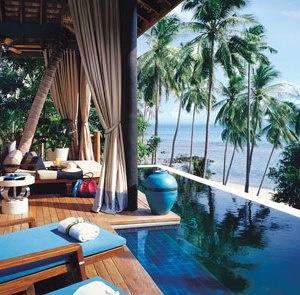 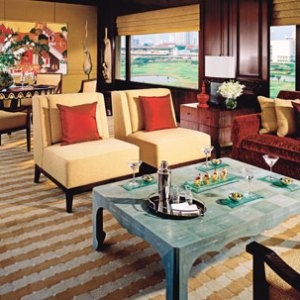 Entry for one team—you and five other players—in the next King’s Cup Elephant Polo Tournament, to be held no sooner than April 2007 in the Golden Triangle region of Thailand.

A private viewing of King Bhumibol Adulyadej’s white elephants, hosted by a royal escort in Bangkok.

Adoption of six elephants and the provision of homes for them in Thailand, where you can visit them annually.

Director of Elephants John Roberts has some advice for novice players of pachyderm polo. “Most players try too hard to hit the ball a long way by taking huge swings,” he says, “and they end up missing it completely. Better to tap the ball a reasonable distance and dribble.” Roberts, who oversees Thailand’s Golden Triangle Asian Elephant Foundation as well as elephant programs at the Four Seasons and Anantara resorts in the region, also advises beginners “to communicate with your mahout [elephant handler] nicely. He won’t understand you better if you shout and scream, and quite often he knows the game and your limitations better than you.”

Roberts, who is originally from Devon, England, and has been in Thailand for three and a half years, knows the game pretty well himself. His elephant-polo career began in 1999 at the Tiger Tops Jungle Lodge in Nepal, home of the World Elephant Polo Association Tournament. Roberts’ first polo-related duty at the lodge was acting as team coordinator for Chivas Regal, the Scotch whisky distillery. Although Chivas lost to the Nepal National Parks team that year, its teams since have won the WEPA title and the King’s Cup Elephant Polo Tournament in Thailand, each several times. Just this September, ThisIsTheLife.com Scotland, the team representing a Chivas-sponsored web site, beat Mercedes-Benz to clinch the 2006 King’s Cup.

If Roberts’ early involvement with Chivas helped put it on a course to its eventual victories, he likely would not say as much; he seems most inclined to discuss what the sport—specifically the King’s Cup—is doing for Asia’s endangered elephants. “It is through my contacts rescuing elephants for this [Asian Elephant] foundation,” he explains, “that I am able to arrange to take young and fit begging elephants off the streets to give them two weeks’ stability, good food, and relatively easy work of playing polo.” (In some Thai cities, people make domesticated, unemployed elephants available for petting by tourists for a fee.) The King’s Cup, Roberts adds, is “creating permanent jobs for experienced polo-playing elephants and, presumably in time, a breeding imperative for those elephants.” To date, the tournament, organized by the Anantara Resort Golden Triangle, has collected through its fund-raising gala dinners about $200,000 for the Thai Elephant Conservation Center (part of the National Elephant Institute) in Lampang province.

The Robb Report reader who acquires this gift will aid the elephants’ cause, in part, by training for and playing in the King’s Cup. You and five team members of your choosing will receive mahout training through the elephant camp at the Four Seasons Tented Camp Golden Triangle resort  “Animal Rites,” where you will stay in tent-style accommodations for a total of 10 nights before and during the tournament. “Most novices are happy just to be able to hit the ball before their first game and learn from there,” notes Roberts. “Nothing can really prepare you for the intensity of competition apart from competition.”

THE PREGAME WARM-UP IS A TRIP

While enabling you to become sufficiently prepared for your elephant-polo debut, this gift also will ensure that you enjoy yourself in Thailand regardless of how you perform in the tournament. The outbound leg of a round-trip, first-class flight from the United States will land you and your crew in Bangkok, where suites at the city’s Four Seasons will be home base. Excursions including a round of golf at an exclusive club, a dinner cruise on the Chao Phraya River, and a private viewing of King Bhumibol Adulyadej’s white elephants—hosted by a royal escort—will be on the agenda.

Next, you and your guests will travel by private jet to Chiang Mai for a three-night stay in two three-bedroom residences at the Four Seasons. There you will study privately with Thai master chefs in the cooking school, preparing curries and other traditional dishes with herbs from the resort’s garden. Outings on this leg will include a sunrise breakfast at a mountaintop wat (temple), a round of golf at the nearby Green Valley course, and an early-morning ceremony where you will present offerings to monks and receive their blessings.

Then you are off (again by private jet) to the Four Seasons Tented Camp Golden Triangle for mahout training—and Mahout Recovery spa treatments daily—in advance of the King’s Cup. Souvenirs from this portion of the trip will include one customized howdah decorated in gold leaf and one antique opium bed, similar to those you will see at the Hall of Opium museum in nearby Golden Triangle Park.

You can take home the two souvenirs, but the six elephants you adopt will remain in Thailand. (The cost of caring for one for its 70-year lifetime is about $630,000, and sponsorship of all six costs nearly $3.8 million of the gift’s total $6.8 million price.) You may, however, visit the animals yearly at the Four Seasons elephant camp and witness them in the care of their mahouts, whose housing and salary are covered in the adoption.

After the King’s Cup, before returning to Bangkok for your departing flight home, you will unwind for five nights at the new Four Seasons Resort Koh Samui, which at press time was scheduled to open in February 2007.