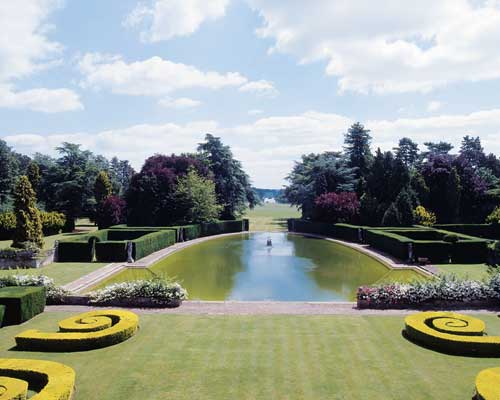 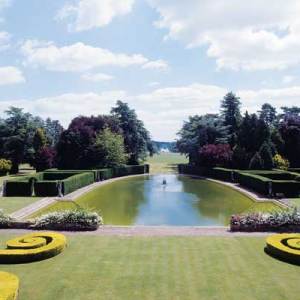 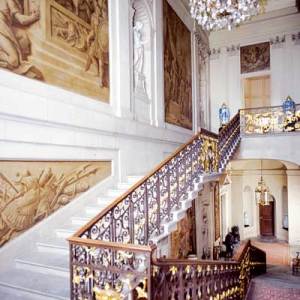 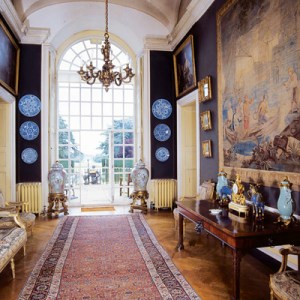 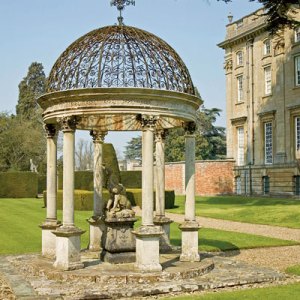 Easton Neston, an estate covering more than 3,300 acres in Northamptonshire, England, epitomizes the grand country home. The main house, commissioned in 1685, was designed by the office of Sir Christopher Wren, the architect who designed St. Paul’s Cathedral in London. Nicholas Hawksmoor, who was a site manager at Kensington Palace and also worked on Blenheim Palace and Castle Howard, was the primary architect on the main house, an English Baroque structure. A highlight of the interior is the cantilevered stone staircase that is believed to be the longest in Britain. The main house contains eight bedrooms and three master bedrooms with attached bathrooms, anterooms, and dressing rooms. The house also includes a main reception hall and a staircase hall, a drawing room, a dining room, a sitting room, a library, a billiard room, a study, a kitchen, domestic offices, storerooms, and a wine cellar that can hold as many as 3,000 bottles.

Hawksmoor also designed the gardens and grounds of the Easton Neston estate, which provide the main house with a high level of privacy, rendering it visible from just two vantage points. The British government formally has recognized the historic nature of several of the estate’s features and has accorded them some degree of protection.

Easton Neston has more to offer beyond a magnificent house and beautiful gardens. It contains the village of Hulcote, which was constructed on the northern part of the property in the early 19th century and now includes four houses, 17 cottages, and a schoolhouse arranged around its green. Towcester Racecourse, a 190-acre facility that is one of the oldest private horse-racing tracks in England, was added to the southern end of the property in 1925. The stable block can accommodate as many as 103 horses, and the new grandstand, which is scheduled for completion in April 2005, will double the seating capacity to 200 spectators.

In the 1970s, a complex of farmhouses on the property served as the headquarters for the Formula One Hesketh Racing team, which belonged to the estate’s owner, Lord Hesketh. The team’s main racer, James Hunt, won the Zandvoort Grand Prix in 1975.

Price: $89.9 million. Contact: Knight Frank, +44.20.7629.8171, www.knightfrank.com. The price represents the cost of the estate as a whole; however, the seller may be willing to subdivide it. The artworks and furnishings are not included in the sale. Some aspects of the property have been accorded a measure of official historic protection that would restrict or curtail construction or remodeling.