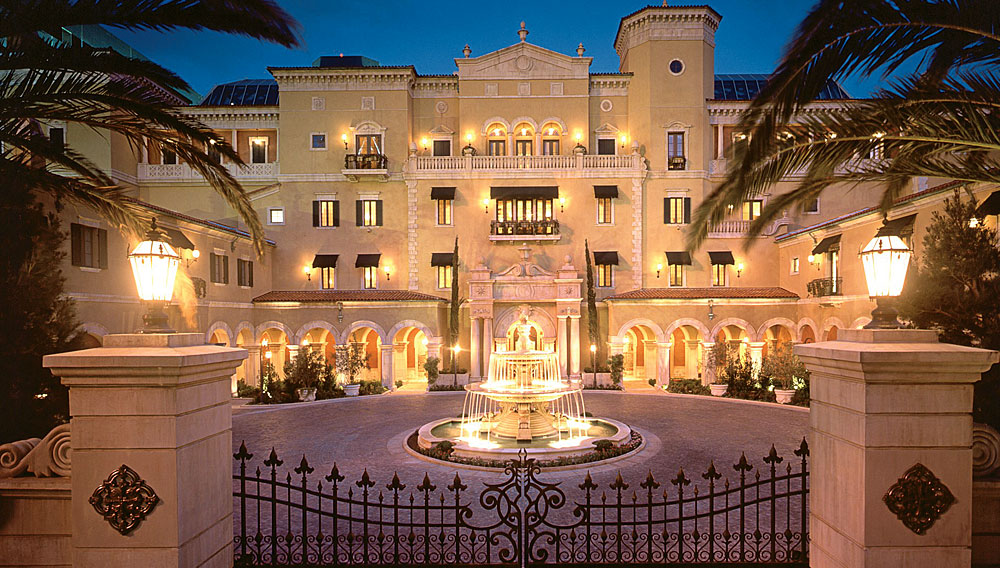 A four-night stay in a two-bedroom villa at the Mansion at MGM Grand for the recipient and three guests.

A private tasting with Joël Robuchon in the kitchen of his eponymous restaurant at MGM Grand followed by a 16-course meal in the villa or the restaurant.

A round of golf at Shadow Creek.

Private lessons from poker pro Phil Ivey in the Ivey Room at Aria.

An evening at Andre’s Cigar & Cognac Lounge at the Monte Carlo, where the gift recipient will be given a box of eight Padrón 1926 Serie 80 Years cigars and a bottle of 1777 Jacques Hardy Private Reserve Cognac.

VIP seats and backstage access to Cirque du Soleil’s O at the Bellagio.

The release of Michelin’sfirst restaurant rating guide for Las Vegas, in 2008, confirmed what visitors and residents already knew: that the city had become a destination for world-class dining—in addition to its traditional indulgences, such as gambling and golf. In the Las Vegas that has emerged over the last few years, prix fixe multicourse tasting menus have usurped bargain buffets, just as elegant resorts have supplanted fantasy-themed hotels.

“Since I opened my restaurant five years ago, I have seen great restaurants open and great chefs arrive in Las Vegas. That makes [it] one of the most dynamic food cities in the world,” says Joël Robuchon, the Frenchman who holds more Michelin stars than any other chef. He earned three for Joël Robuchon at MGM Grand, his first restaurant in the United States and the standout venue in Michelin’s initial Vegas guide. “[The MGM Grand management] really gave me the support I needed in order to create the restaurant I wanted,” he says.

The chef and restaurant Joël Robuchon are key components of this best-of-Vegas gift for a Robb Report reader and three guests. The party will stay in a two-bedroom villa at the palatial Mansion at MGM Grand, a Robb Report Best of the Best selection in 2004. During their stay, the group will be treated to a private tasting—conducted by Robuchon himself—in the kitchen of his restaurant. Later, in the gift recipient’s villa or the restaurant, the chef will prepare a 16-course meal, accompanied by a selection of rare wines including offerings from Krug and Chateau d’Yquem.

Following a round of golf at the exclusive Shadow Creek course, the foursome will venture up the Strip to the newly opened Ivey Room at Aria Resort & Casino at CityCenter. There, they will learn some tricks from the room’s namesake, Phil Ivey, a winner of eight World Series of Poker bracelets. Ivey will conduct an hour-long poker primer and even play a few hands with the group members—if they dare.

Equipped with new poker skills, the group could enjoy a bountiful day at the tables. Afterward, depending on how Lady Luck has treated them, they may celebrate or find solace at the Monte Carlo casino and resort in Andre’s Cigar & Cognac Lounge, a smoking room where the Strip’s sensory assault gives way to dim lighting and the wispy smoke of fine tobacco. At the lounge, the gift recipient will be presented with a box of eight Padrón 1926 Serie 80 Years cigars and a bottle of 1777 Jacques Hardy Private Reserve, a rare Cognac sourced from the personal collection of company founder Anthony Hardy.

While Vegas still has its share of past-their-prime entertainers, it is also a home to the sophisticated artistry of Cirque du Soleil. The troupe’s show O is a water-themed extravaganza involving acrobats, synchronized swimmers, and divers performing in and above a one-and-a-half-million-gallon pool at the Bellagio. After watching an early performance from VIP seats, the gift recipient and guests will be taken backstage to meet the performers. They can then stay to watch the next show from backstage, where they will have a chance to witness the methods behind the magic.

The trip must be completed by December 23, 2011; blackout dates could apply. The dates of the trip must coincide with the availability of Joël Robuchon and Phil Ivey. The gift recipient and guests will be able to stay at the Mansion at MGM Grand and play golf at Shadow Creek provided accommodations and tee times are available during the dates of their trip. Private parties at the Mansion are subject to guidelines set by MGM Grand.