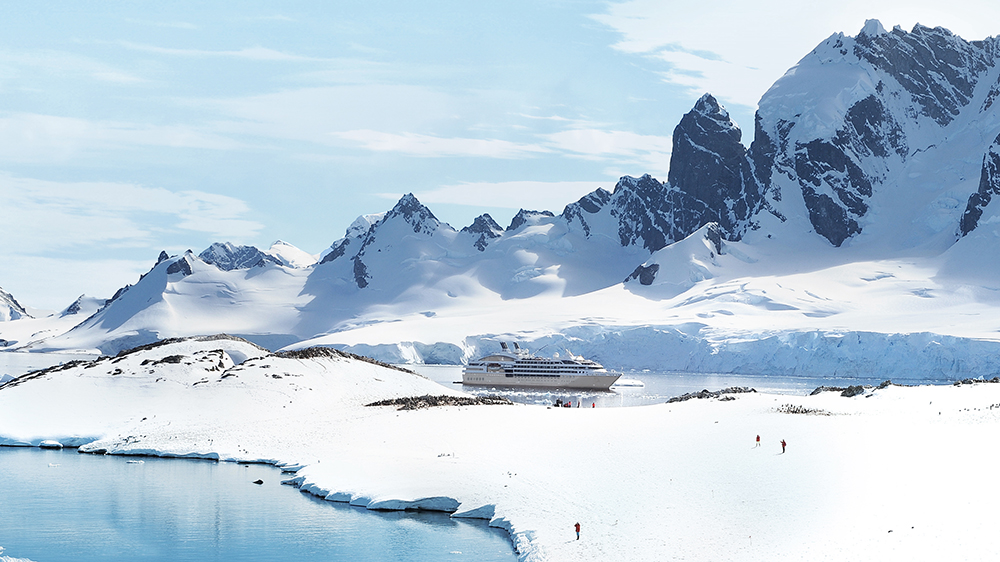 “These ships are the best of both worlds,” says Expedition Trips founder and president Ashton Palmer, whose agency focuses on this very niche. “We’re in an unprecedented boom period for small-ship cruising—every line is trying to outdo the others, whether on hardware or the itineraries.” He adds that even charter vets should consider booking one of these adventurous trips: Larger ships are more stable, of course, and better equipped with essentials like helicopters to reach even the most remote, wildlife-packed spots.

Take Ponant’s 123-cabin Le Commandant Charcot, which launches next month with a polar itinerary that whisks guests via the ship’s isolated, namesake island to see the emperor penguins, a voyage that’s been largely inaccessible to all but research vessels until now. “No one in the history of small-ship cruising has been able to do what it does,” says Mary Curry of Adventure Life, another cruise specialist, who says the ship’s icebreaking PC2 rating is just one notch below most scientific boats. There are even onboard lab areas where passengers can pitch in as citizen scientists—plus, for downtime, an indoor pool, heated blue lagoon baths and a pair of restaurants. Curry also recommends Aurora’s Sylvia Earle, with an X-bow design that allows for smooth sailing even in the churn-prone Drake Passage and virtual-anchor technology that helps protect the sea floor. The namesake naturalist will be onboard for its first voyage next spring, around Baja California and the Sea of Cortez.

Think of Seabourn’s newest vessel, the expedition-primed Venture, which launches next April, as a cruise ship that thinks it’s a superyacht, with an onboard garage stocked full of cutting-edge toys: Alongside Zodiacs and e-bikes, you’ll also find two custom-built submarines.

National Geographic’s new Resolution retains the line’s signature focus on education—it’s unflinchingly highbrow— but boosts the onboard luxury experience beyond the rest of its fleet with two restaurants and an infinity-style hot tub.

In the Galapagos, Silversea just debuted its purpose-built Silver Origin, with butler service to all suites and a nearly 1:1 crew-to-guest ratio for a maximum 100 passengers. Richard Turen of Churchill & Turen, a cruise specialist agency, notes the ship’s spectacular 1,700-square-foot owner’s suite. “The views from the balcony, which is 646 square feet, are amazing as you go through the Galapagos,” he says. “People who charter a yacht would be very comfortable with that.” Yacht veterans might also consider the new 16-passenger catamaran Cormorant II, with its grand, balcony-equipped staterooms, or the 20-passenger megayacht Evolve, from Ecoventura.

Both of these vessels, of course, are ideal for private charter—most of the cruise lines also offer full charters, with a seven-day custom voyage with Seabourn, for instance, starting at $2.5 million—but Turen recommends considering a partial charter, where an intimate group can customize excursions, dinners and other onboard activities, much like a ship-within-a-ship, even on the smaller vessels.

The best destinations for first-time expedition cruisers? Think of Antarctica as a Broadway show and the Arctic as a modern-art museum, per Palmer. “Antarctica is a slam dunk, in-your-face experience, but you have to work harder to appreciate the Arctic, which is contemplative and subtle,” he says. Antarctica’s sailing season is the northern hemisphere’s winter, but Arctic voyages take place in summer, offering welcome respite from increasingly sweltering temperatures at home. “A luxury traveler doesn’t want to compromise on anything— an experience over and above what the average person does, yes, but without forgoing creature comforts like a [large] cabin,” he says. “They want it all, and now they can have it.”