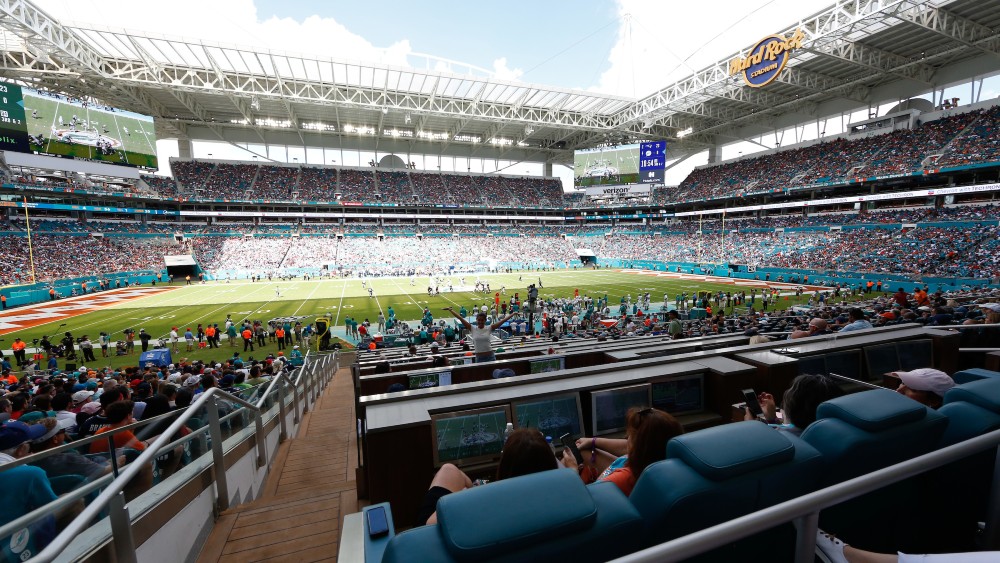 While it hasn’t been determined yet which two teams will be playing in the 54th Superbowl, it’s a sure bet that come February 2nd, football fans will want to be in Miami’s Hard Rock Stadium to catch the big game. And to really do it right, high-rollers will want to book the once-in-a-lifetime Ultimate Superbowl Experience offered this year from private aviation company NetJets and luxury yacht charter company Northrop & Johnson. Available for one booking only on a first-come, first-served basis, the package—which starts at $720,000—pairs the thrill of the Superbowl with relaxing time in the Bahamas.

Fly private to the game with NetJets  Photo: Courtesy NetJets

To start, guests will be flown in a luxury NetJets aircraft to Miami, where they will spend three nights in an Oceanfront Residential Balcony Suite at The Ritz-Carlton Fort Lauderdale. On the night before the Superbowl, they’ll get access to the NetJets VIP pre-party, which in years past has featured performances by Maroon 5, Lionel Richie, and Lady Antebellum. (This year’s entertainment is still under wraps.) On game day, a town car will ferry you to Hard Rock Stadium, where you’ll catch all the action from seats located within the first 10 rows on the 50-yard line, and have access to the hospitality offered in the VIP 72 Club. Following the game, it’s time for meet-and-greets with the athletes, then more celebrating at the MAXIM after-party.

After the excitement of the football weekend ends, it’s time for some R&R in the sunshine. A NetJets flight will next take you from Miami to the Bahamas to board your own private yacht provided by Northrop & Johnson, which charters some of the world’s most top luxury vessels–including your temporary residence, the 236-foot, six-stateroom SOLO, which features a large infinity pool on the aft main deck. After four days and nights spent cruising around the Bahamas, a final NetJets flight will then take you back home. The full package is available from January 31-February 7, for a starting rate of $720,000 for two guests. For more information and to book, contact Football@embarkbeyond.com.