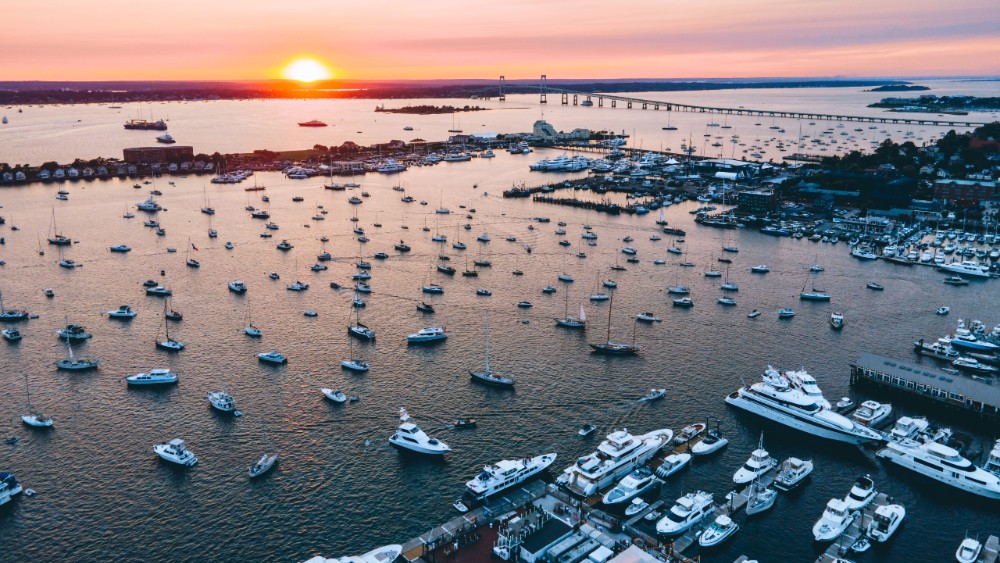 The self-proclaimed sailing capital of the world, yacht-filled Newport, Rhode Island, proves a perennially popular summertime destination. It got its sybaritic start a couple centuries ago as a relatively easy, and relatively cool, seaside escape for American aristocrats seeking a break from stifling Northeastern and Southern city summers. And it quickly became the destination for fine-weather Gilded Age fun. The boldest of bold-faced names, from Astors to Vanderbilts, built seasonal coastal “cottages” (read: palatial mansions) here, the better to enjoy the boating, beaches and glam balls of the social scene.

Recently, the town has enjoyed a renaissance, thanks to the arrival of new and notable hotels and resorts, restaurants, museums and more, plus updates to longtime favorites. The success of HBOMax’s Gilded Age series, now picked up for a second season, hasn’t hurt the place’s popularity, either, as it shows Newport in all its glittering, late-19th-century glory.

Here are eight reasons to visit this summer, each of which showcases how the destination’s grandest current pleasures are firmly grounded in its storied past.

Auberge—the celebrated California-based brand behind Napa’s new Stanly Ranch and the classic Auberge du Soleil—continues its New England expansion with the purchase and reimagination of the 1909 Georgian-style Vanderbilt, the rare Newport mansion located downtown. Originally built by Alfred Gwynne Vanderbilt (yes, one of those Vanderbilts) and later owned by famed heiress Doris Duke, the majestic building now sports 33 richly colored guest rooms and suites, plus plenty of plush public spaces, including a hidden bar off the parlour. Every inch pays light, often playful homage to history. Expect to be wowed by a newly green-hued iteration of the grand entry’s original double staircase, as well as the mix of antiques and contemporary art throughout. And, in the dining room, don’t miss the pub-inspired dishes by top chef April Bloomfield. Rooms from $650 a night.

Designed to appeal to sailors both novice and expert, the month-old Sailing Museum takes visitors on an interactive journey. The experience begins with museumgoers selecting a virtual vessel and then continues through high- and low-tech exhibitions that explore what it takes to pilot the boat you’ve selected. Displayed among areas devoted to a variety of sailing subjects—including wind and water, teamwork and competition—are several famed ships, not least a 12-foot-long ice boat capable of reaching 50 knots. Top off a trip to the museum—which is located in the city’s historic Armory, right on the central waterside thoroughfare that is Thames Street — with a visit to the new home it provides for the National Sailing Hall of Fame and the America’s Cup Hall of Fame.

Giusto comes to us from Rhode Island native Kevin O’Donnell, who trained in Umbria and then under Mark Ladner at Manhattan’s Del Posto before making his name first with a tiny Parisian neo-bistro and then with Boston’s Venice- and Northern Italy-inspired SRV, which earned attention from the James Beard Foundation. Here, he seamlessly combines the best local produce and products with authentic pan-Italian knowledge and a healthy dose of what he refers to as “freestyle” creativity. The result? Signature dishes like steamed littlenecks with guanciale and mascarpone, and squid ink tempura–fried calamari. New for this season: A weekday “Aperitivo Hour,” from 2:00pm to 4:30pm, where a changing array of small-bite snacks pair perfectly with craft cocktails and natural and biodynamic wines from the predominantly Italian list.

Stays for the 21st-Century Sailor: The Brenton  and Hammetts Hotel

Due to the pandemic, the first new harborside hotels to be built in Newport in years—the Brenton and Hammetts—made their debuts relatively quietly, back in the summer of 2020. But these nautically inspired spots have had their praises sung, and loudly, ever since. This season, the 84-room Hammets is presenting guests exclusive experiences thanks to a just-debuted partnership with the New York Yacht Club, and offering seats on a 36-foot Hinckley motor yacht to watch the 635-mile Newport Bermuda Race in mid-June. The 57-room Brenton, meanwhile, makes its own 36-foot Hinckley available to guests for private charters. And the hotel’s new tie-in with the Newport International Polo Series (running from June through September) sees the Brenton hosting a weekly haute “tailgate” event exclusively for hotel guests. The Brenton, rooms from $349; Hammetts, rooms from $350 a night.

Lifelong sailors and Newport aficionados, the new owners of this enviably located marina-side restaurant and bar have slowly reinvented it since buying the former Pier restaurant just before the pandemic. This season, The Reef is bringing back its year-old water-facing alfresco horseshoe-shaped bar (the better for drinking rum-based Painkiller cocktails, ever popular with sailors) and welcoming an updated, globally inspired menu from recently arrived executive chef Giacomo Iannelli (the better to soak up all the rum). Remaining the same will be the spirited afternoon social scene on the two expansive waterview terraces, and the sensational sunsets seen from there, too.

What a Racquet: The International Tennis Hall of Fame

This storied site, originally known as the Newport Casino, made its debut in 1880 as a society tennis club, with charming shingle style architecture by McKim, Mead and White and grass courts that served as the HQ for the competition that eventually became the US Open. These days, the International Tennis Hall of Fame boasts 13 recently resurfaced grass courts (plus six hard and one clay), and a newly arrived Director of Tennis who came on board after a decade with the US Tennis Association. This spring saw the opening of four new ongoing exhibitions here, including “Breaking Boundaries,” an interactive show chronicling the Black tennis experience and celebrating African-American players.

Earlier this summer, the Preservation Society of Newport County reopened two of its grand Gilded Age house museums that have otherwise been closed to tours since the pandemic began. Based on Versailles’s Grand Trianon and designed by turn-of-the-20th-century starchitect Stanford White, the richly ornamented Beaux-Arts-style Rosecliff is so impressive, it served as Jay Gatsby’s house in the 1974 film of The Great Gatsby. Newly opened (and only on weekends in June), the Gothic Revival Kingscote, meanwhile, also shows off White’s inimitable touch. At the end of the 19th-century, he renovated and enlarged the 1839 original, adding, among other decadent details, glass from Louis Comfort Tiffany.

For an extra dose of Gilded Age glamor, head down the coast of Rhode Island an hour to Watch Hill. Here, late-19th- and early-20th-century shingles-style “cottages”—all still privately owned, many by the families who first built them—overlook one of the most beautiful stretches of sandy beach and turquoise-sapphire Atlantic waters in all of New England. The destination is also home to the grande dame seaside hotel the Ocean House, originally built in 1868 and painstakingly updated for the 21st century about a decade ago. New at the hotel this season are the beachfront coastal Mediterranean restaurant Thēa and the elevated, alfresco Mexican spot Dalia, both helmed by the talented Mexico City–born chef Dantón Valle. There’s also new breakfast service in the secret garden of the pop-up Champagne bar and a just-opened garden terrace serving afternoon tea and Sipsmith Gin cocktails with floral inspiration. Rooms from $615 .