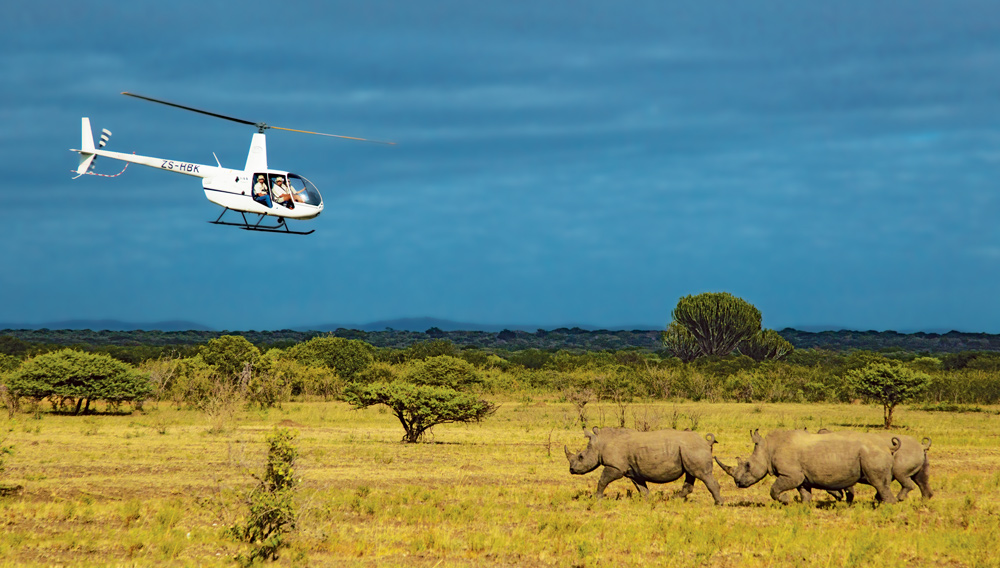 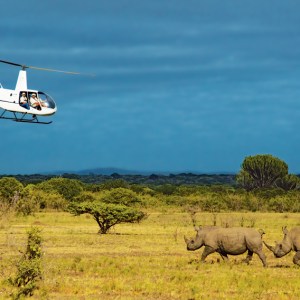 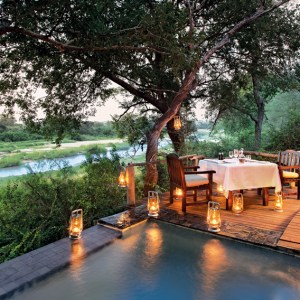 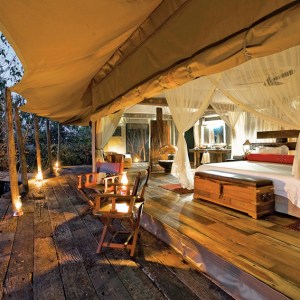 ❄ A donation to Rhinos Without Borders to fund the organization’s capture, transport, and release of two rhinoceroses.

❄ A 10-day safari visiting and Beyond and Great Plains Conservation lodges in South Africa and Botswana.

❄ Participation in either the capture or the release of the two rhinos.

A half million rhinoceroses once roamed Africa and Asia. Today, however, the wild population of the animals—whose horns are prized for supposed medicinal qualities and as status symbols in Vietnam and China—numbers less than 29,000. In fact, one rhino is killed by poachers every seven hours in South Africa alone, leaving the great beasts teetering on the brink of extinction.

Rhinos Without Borders, an initiative cofounded by the African safari companies and Beyond and Great Plains Conservation, is taking drastic measures to prevent the animals’ demise. The organization’s ambitious plan involves tranquilizing and capturing 100 rhinos in high-risk areas in South Africa and transporting them via convoy and cargo plane to relative safety in Botswana, a country renowned for its aggressive antipoaching measures. So far, the group has successfully airlifted one batch of rhinos, including a pregnant female who subsequently gave birth in her new home in the Okavango Delta.

With this gift, Rhinos Without Borders is offering the recipient and a guest a once-in-a-lifetime opportunity to assist—both financially and physically—in saving the animals. The price of this gift includes a $100,000 donation that will fund the transfer of two rhinos from South Africa to Botswana. The remainder of the price will cover a 10-day trip for two that will include participation in either the capture or the release of the rhinos.

The adventure will begin in South Africa, where the recipient and guest will receive an insider’s view of the challenges facing antipoaching efforts from andBeyond’s CEO, Joss Kent (see “The Robb Reader,” page 288), and reserve manager, Simon Naylor. Depending on the timing of the trip, the guests might help Kent and Naylor track, dart, and capture two rhinos.

“Darting the rhino from the helicopter and then tracking it through the bush is adrenaline fueled and exciting,” says Kent. “But the most incredible experience is placing your hands on this incredible beast before it is carefully revived. Such enormous power and presence, and yet so vulnerable.”

While on safari in South Africa, the guests will stay in an andBeyond camp or other luxury lodge, depending on the location of the rescue operation. In Botswana, they will stay at Great Plains’ exclusive Zarafa Camp in the Selinda Reserve. If the timing of the trip coincides with the release, rather than the capture, of the rhinos, the guests will be helicoptered from Zarafa to a secret location and will assist in preparing and freeing the animals.

“At release, it takes about 20 to 30 seconds for the sedated rhino to come fully awake,” says Kent. “From squatting beside [it], monitoring it, and caring for it, you then have 30 seconds to run to safety. Survival instincts will make you run faster than you have ever done in your life.”

In Botswana, the guests will be joined by Great Plains’ owners, the world-renowned wildlife filmmakers Dereck and Beverly Joubert, who will oversee the rhinos’ release and capture it on video for an upcoming documentary. The trip, which includes charter and international flights within Africa, will wind down with a stay at Cape Town’s elegant Ellerman House hotel, where the guests can reflect on their amazing rhino rescue.

The price is approximate and may vary. A precise rate will be quoted once trip dates are fixed. The $100,000 donation is tax deductible for residents of the United States, United Kingdom, or South Africa.