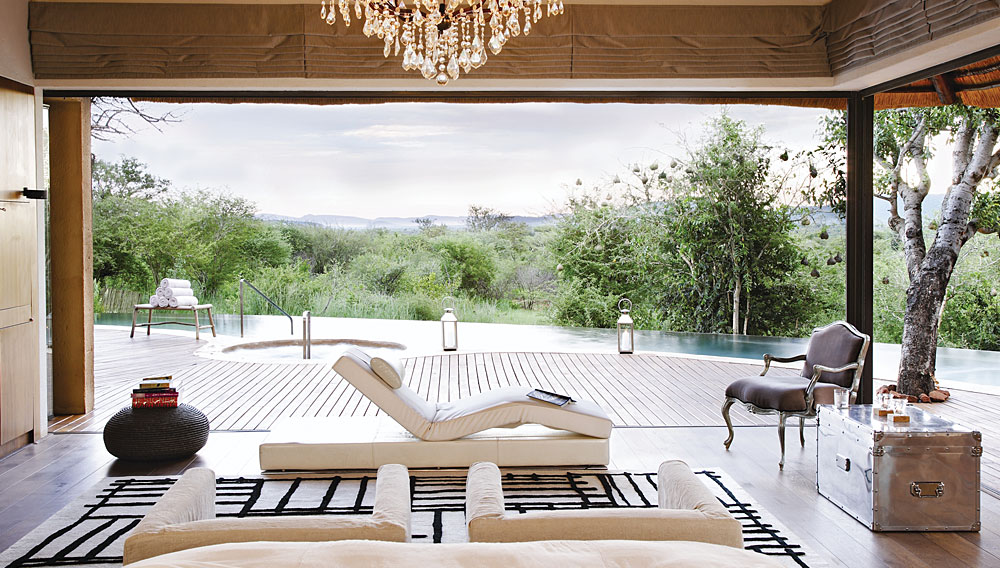 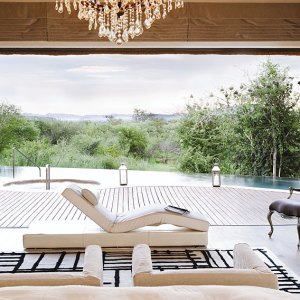 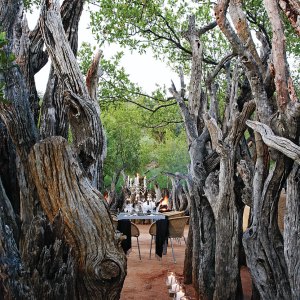 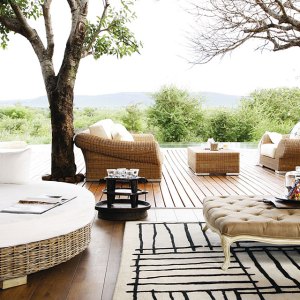 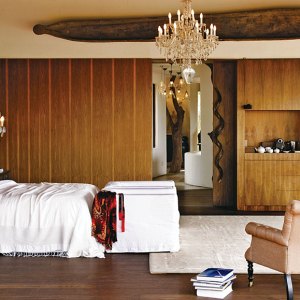 While navigating a dirt road in the Madikwe Game Reserve, in South Africa’s North West Province, Greg Lederle receives a call on his open-top Land Cruiser’s short-wave radio: Two lions are lying in a shaded area only yards from the electrified fence that surrounds the Molori Safari Lodge property. Lederle, a field guide and the lodge’s comanager, is transporting two of us to Molori from the game reserve’s rocky airstrip.

When he nears the lodge, Lederle brings the Land Cruiser slowly toward the fence—and there we see the lions. The female is lean and hungry-looking. The male’s face is battle-scarred yet beautiful. The animals consider us sleepily and then casually walk by, passing within a few feet. “Welcome to Molori,” Lederle says.

Madikwe is a dry and dusty landscape with a surprisingly heavy floral aroma of blackthorn during the South African winter, which runs from June through August. The contrast between the wildness of the game reserve and the refinement of the lodge does not need to be underscored, but the lions’ presence does it anyway. Molori, says Kirk Lazarus, one of the property’s owners, is intended for the traveler “who wants an exclusive environment with everything at his fingertips.”

The lodge, which officially opened to the public last October, is the flagship of Molori Private Retreats, a new hospitality company that plans to open a second South African location, Molori Clifton, on a beach in Cape Town in time for the 2010 World Cup. In January the company opened two smaller, villa rental–type properties in Australia: Molori Mirage, a five-bedroom home located on a private golf course near Four Mile Beach in Port Douglas, and Molori Sydney, a three-bedroom, two-level residence overlooking Double Bay. Transportation to the properties can be arranged on Molori Air, the owners’ private jet fleet, which consists of a Boeing 727-200, two Gulfstream GIIs, a Socata TBM 700, a Learjet 25C, a Hawker 700, and a Bell 222 helicopter.

Molori Private Retreats’ inaugural property started as a private getaway for Ivor Ichikowitz—a tycoon with various African business interests including oil, gas, IT, and infrastructure—whom Lazarus met in secondary school. Ichikowitz acquired a 50-year lease on the 12-acre property in 2002 and built a thatch-roofed safari lodge modeled on an existing adjacent property. Shortly thereafter, Ichikowitz invited Lazarus, a Johannesburg native who describes his line of work cryptically as “the international energy business,” and another friend (whom Lazarus declines to identify) to become involved in the lodge’s development. “It was mostly for us guys and our families, to have a dream experience,” Lazarus recalls.

That experience, in Lazarus’ estimation, required a complete makeover for Molori, which entailed demolishing much of what Ichikowitz had built and replacing it with the current structures. “Kirk got involved and expanded and opened up everything,” says Riana Lederle, Greg’s wife and the other comanager of Molori.

According to Lazarus, Molori’s magnificence owes to the fact that the property was not intended for public consumption. “You’d never find this opulence in a hotel, because you’d have to watch every meter of cost,” he says. “Since budget wasn’t an issue, we went for what we imagined.”

In 2007 the owners decided to open Molori to the public, or at least to those guests who can afford the nightly rates—which range from approximately $2,000 to $5,000. “I’m associated with a lot of wealthy people, and I’m always hearing them complain about something,” Lazarus says. “So we decided to give them the chance to experience what they had not been able to find elsewhere.” As for the partners’ lack of experience or expertise in the hospitality business (they acquired the Cape Town and Australia properties in early 2008), Lazarus says he was not fazed by it. “It would have been different if we were looking to build a hotel chain—that’s not our field. But we aren’t looking to exceed eight properties, so having a background in hospitality wasn’t a concern.”

The highlights of a stay at Molori are the early-morning and late-afternoon game drives (or, if you prefer, game walks) through the 185,000-acre Madikwe Game Reserve. You might see six-ton elephants entangling their trunks in a playful tug-of-war, rhinos staring at you unnervingly over their horns, or oryx, impalas, springbok, and kudu flashing between the shepherd’s trees. Madikwe is also a birder’s paradise, home to some 350 species ranging from what Lederle calls “LBJs,” or “little brown jobs,” to the rare yellow morph of the crimson-breasted shrike.

Between game drives you can enjoy a workout or a spa treatment, but you also will be tempted, as Lazarus puts it, to just “chill” in one of the many areas of the lodge that encourage relaxation. “For me, that is the standout thing,” he says. “You can be here for 10 days and every day find a new spot.” Following dinner—prepared by Molori’s chef, Willie Malherbe, whose cuisine delights the palate and is paired with the perfect wines—relaxation awaits in the library with its selection of Havana cigars, the lounge with its baby grand, and the well-stocked bar (hangover kits are provided).

Lederle refers to the decor throughout Molori, which Lazarus and the Johannesburg-based designer Stephen Falcke selected, as “African chic.” A local woodworker used lumber from indigenous leadwood trees to construct the lodge’s countertops, table bases, and doors, lending a handmade quality to the property. Companies in Cape Town and Johannesburg provided additional woodwork, as well as the tile and stonework. Most of the furnishings came from Weylandts, a South African variant of the Conran Shop, though Falcke designed the extra-deep, nap-inducing sofas. Much of the lodge’s art was culled from Amatuli Fine Arts, a highly regarded gallery in Johannesburg. On global shopping trips, Lazarus and Falcke acquired distinctive items that individualize each space, such as the Metsi Suite’s hand-beaded Ethiopian armchair and the main lodge’s trio of antique Chinese cabinets.

Lazarus determined that at Molori “the comfort should be smooth and the look should be high,” in contrast to the look of most safari lodges, which Falcke describes as “dark, more ‘African’ in an obvious way.”

Its decor and amenities notwithstanding, Molori’s greatest asset, says Lazarus, is its staff. “Everyone is trained to think ahead of your needs,” he says. For example, when you return from a dusty game drive, you will find Lida-Marié Malherbe, the assistant operations manager (and the chef’s wife), waiting with a tray of citrus-scented washcloths, and front-of-house head Isaac Modiko offering custom-made fruit drinks. And then there is Greg Lederle, a superlative guide who can find game in the most unpromising circumstances (and is quick with his ever-present bolt-action Brno, just in case). Lazarus says, “Greg is excellent at judging the crowd, and sharing his knowledge and sense of humor, which is very dry.

“It’s not about making everyone feel like a client,” Lazarus adds. “It’s making them feel at home. That’s what’s going to set these properties apart.”