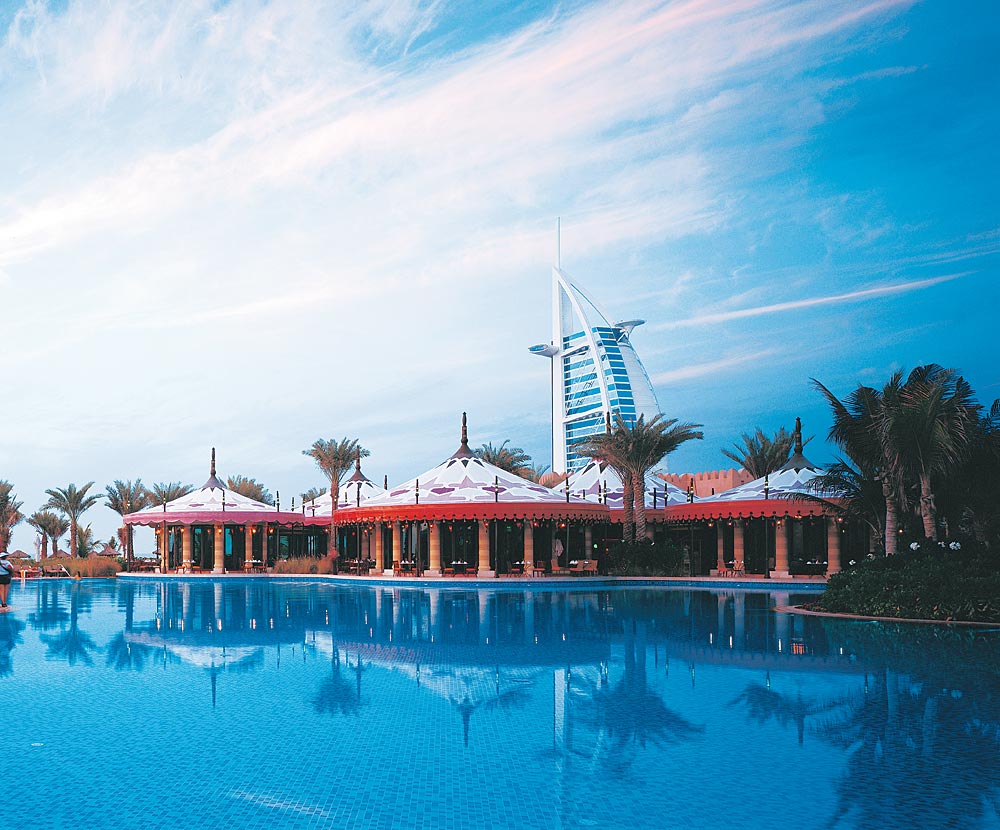 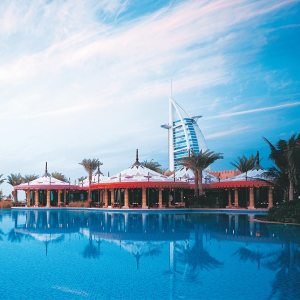 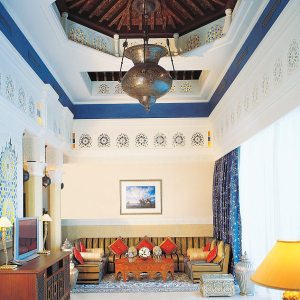 Built to resemble a sheikh’s royal summer retreat, Al Qasr features intricate mosaics, panels, and Arabian antique furnishings in its palatial public spaces and guest rooms. Each of the rooms has a private terrace—several of which overlook the Arabian Gulf—and the Royal Suite includes three bedrooms, a Dining area, and a majlis, a traditional room used for entertaining in Arabic homes. If Al Qasr were in Las Vegas, the hotel’s old-Arabia theme might seem contrived, if not downright tacky. But in Dubai, which was part of old Arabia, the flying-carpet-fantasy atmosphere rings authentic. Of course, as an invention of modern Dubai, this magic palace is by no means restrained: Guests drive past a sculpted team of Arabian horses on the hotel’s ceremonial causeway entrance; stand under a 14.7-by-16.4-foot crystal chandelier in the lobby; stroll on an ornate bridge in the water garden; and ride in abras, or traditional water taxis, along the 2.5 miles of man-made canals that link Al Qasr to the beach and restaurants at Madinat Jumeirah. Accommodations The 292 Arabian-style guest rooms and suites are outfitted with mosaics, marble baths, and balconies. Facilities Guests have access to the greater resort’s facilities, which include a private beach, a health club with three swimming pools, a new spa with 26 treatment rooms, a shopping souk with 75 boutiques, a 1,000-seat outdoor amphitheater, a 432-seat indoor theater, and a 38,750-square-foot conference hall. Dining Spanish/Moorish food at Al Hambra, California cuisine at Napa, Mediterranean fare and seafood at Pierchic, a multicultural buffet at Arboretum, and beachside and poolside Dining at Khaymat Al Bahar. The Madinat Jumeirah complex contains 45 restaurants, cafés, and bars. Concierge Recommends Walk the narrow lanes of Dubai’s Bastakiya district, where historic buildings, courtyard homes, museums, and galleries offer a taste of old Arabia. Rates Deluxe rooms from $780, executive rooms from $940, and junior suites from $1,080. The Royal Suite is $6,950.