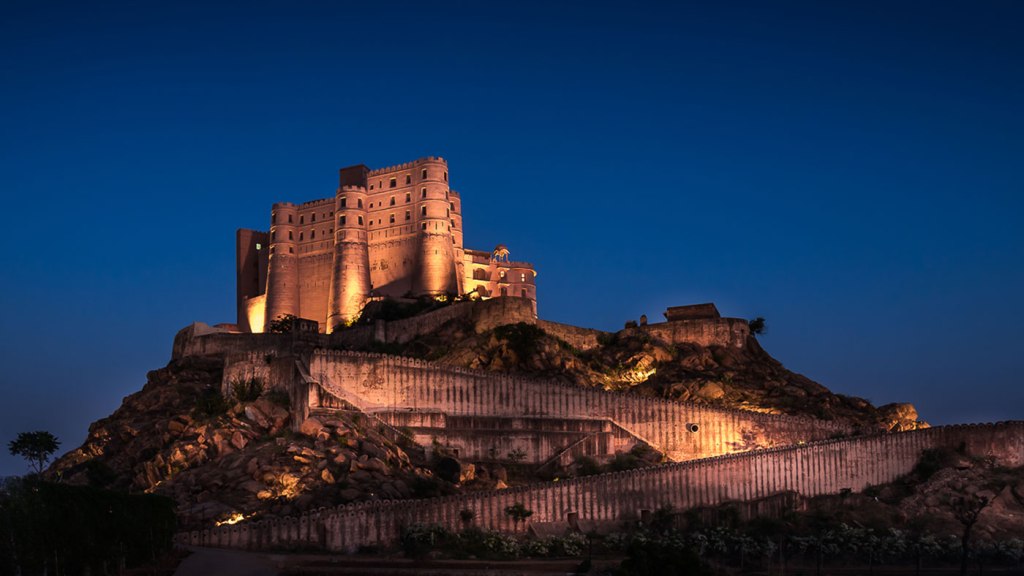 Throughout India, historic buildings have undergone painstaking renovations to transform into some of the world’s most beautiful hotels.

Udaipur’s white-marble, 83-room Taj Lake Palace seems to float atop the water, as it has since the maharana commissioned it in 1746. Devigarh Palace, built in 1760, became Raas Devigarh in 1999 following 15 years of renovations. Taj Falaknuma Palace, commissioned in 1884 by the sixth Nizam of Hyderabad, became a 60-room hotel in 2010. The latest landmark to undergo this transformation is Alila Fort Bishangarh, a 230-year-old warrior fortress that has taken almost 10 years to convert into an ultra-luxurious hideaway.

Making its grand debut on July 1, on a dramatic peak atop a soaring Aravalli hilltop, Fort Bishangarh is no palace. Cleverly, the renovation devoted a significant addition to the centuries-old structure to housing most of the hotel’s 59 suites (priced from $285 per night, with suites starting at $325 per night). Like the fortress itself, the rooms are more minimalist than ornate, accented with Rajasthani touches like jaali screens and block-printed fabrics. Of particular note are the 18 Heritage Rooms, where guests can look out over the impressive Rajasthani landscape through scalloped jarokha-style windows from cushioned window seats.

Guests of the resort—which is a quick hour-long drive from Jaipur—will find three full-service restaurants within the 6.5-foot-thick walls of the old fort. Amarsar serves both Western cuisine and local Indian cuisine; for more robust fare, they can dine at Nazara, which uses sandpits and spit fires to roast its hearty entrees. After dinner, guests can head to bar Madhuveni, which is home to a cigar and whiskey lounge tucked away in one of the fort’s many turrets. And for some R&R with a dash of drama, the spa is a tranquil and rejuvenating oasis set in a most unlikely location: the fort’s former dungeon.