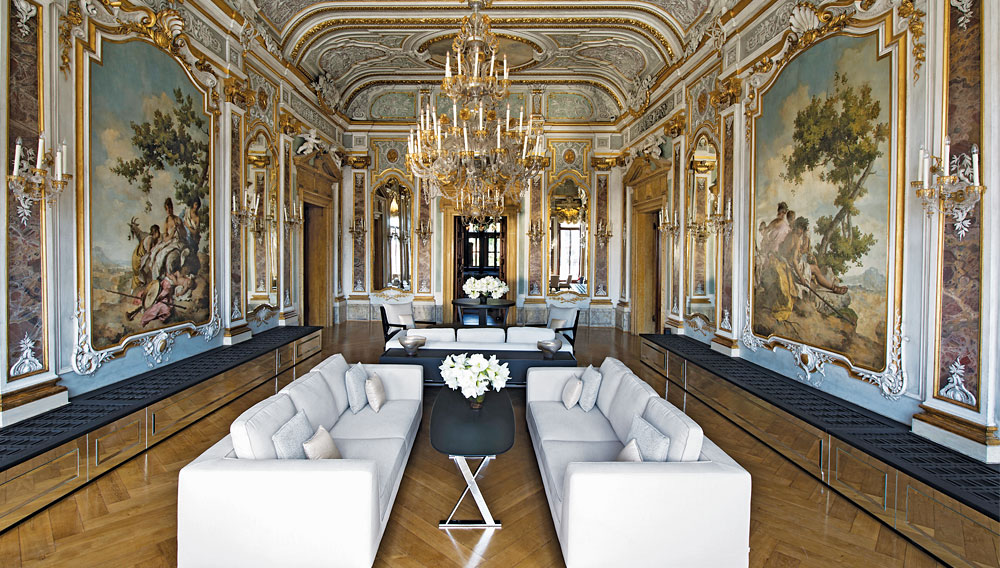 The Aman Canal Grande Venice opened in June in the city’s San Polo district, in a 16th-century palazzo owned by Italy’s Count Arrivabene Valenti Gonzaga and his wife, Countess Bianca di Savoia Aosta. The couple resides in the top-floor penthouse of the building, whose classic European ambience marks a striking departure for Amanresorts.

Known for its Zen-like contemporary hotels, Amanresorts has embraced the neo-Renaissance and rococo styles of its first property in Italy. Intricately restored frescoed ceilings, golden cornices, and ornate tapestries fill the waterfront palazzo, which is adorned throughout with paintings by the Italian masters Giovanni Battista Tiepolo and Michelangelo Guggenheim. The hotel’s Sansovino Suite features an original fireplace designed by the 16th-century Venetian architect Jacopo d’Antonio Sansovino. But Amanresorts’ modern ethos is not entirely absent in the 24 guest rooms and suites, where interiors by the designer Jean-Michel Gathy incorporate minimalist bathrooms and wenge-wood furnishings from B&B Italia.

Rare in Venice are the Aman’s two gardens: one a hidden treelined courtyard, the other a dining terrace with views of the Grand Canal. A fitness center affords vistas over the city, while two boats, which can be used for private cruises along the canals or trips to Venice’s lagoon islands, offer regal means for exploration. Aman Canal Grande Venice, +39.041.270.7333, www.amanresorts.com