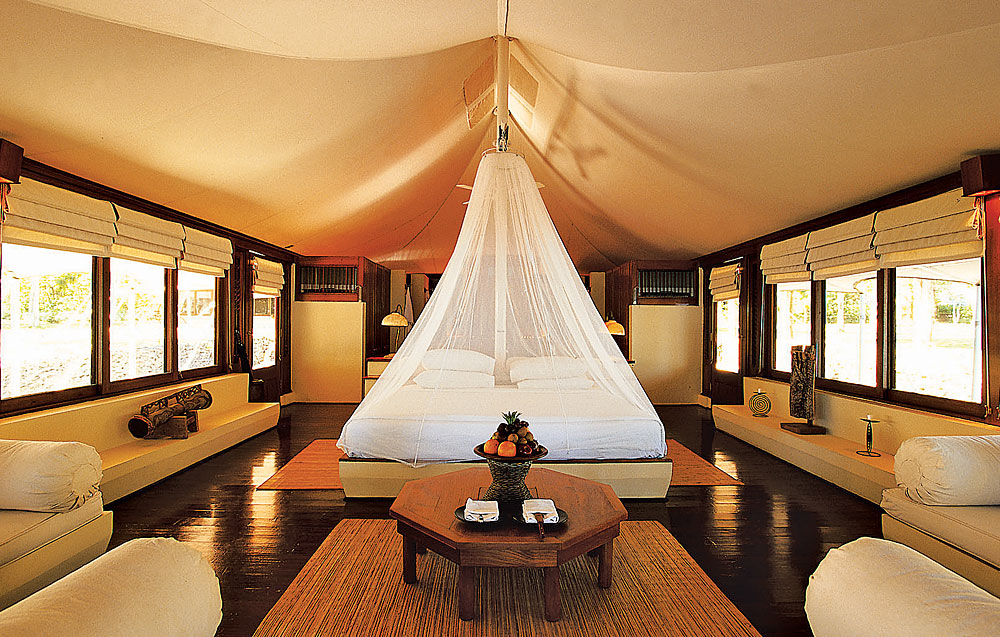 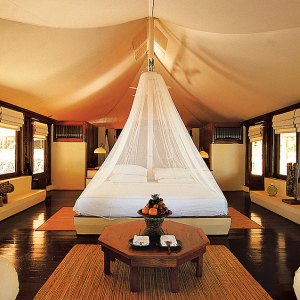 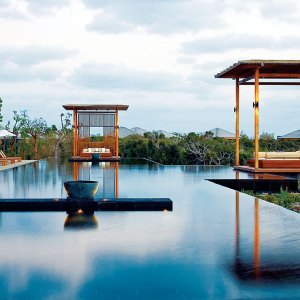 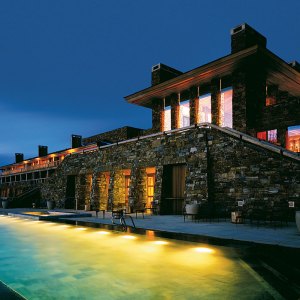 This year marks the 20th anniversary of the opening of Amanpuri, the Phuket hideaway that eventually became the flagship of Amanresorts. Today, in addition to Amanpuri, the company operates 17 properties that draw Amanjunkies to such far-flung destinations as the Philippines, French Polynesia, Bhutan, and Jackson Hole. Some highlights:

Moyo Island is a nature preserve located 15 minutes by boat from the island of Sumbawa, east of Bali in Indonesia. Rising beneath a canopy of tropical greenery on Moyo, Amanwana (“peaceful forest”) comprises 20 air-conditioned tents linked by sand pathways and an open-air pavilion that serves as a dining room and social center. The Aman faithful travel to Moyo Island for its jungle and marine life; numerous dive sites include a reef wall with a face that drops more than 140 feet to the ocean’s floor. The resort’s seven-day Komodo Expedition includes five nights on the 88-foot Ikan Gurami yacht, which takes guests to remote islands to view the voracious Komodo dragon in its native habitat. Day trips from the resort include a physically demanding trek to a cave that is home to monitor lizards, pythons, and seven species of bat. Amanwana’s Jungle Cove Spa offers more relaxing ways to spend an afternoon, including a fresh-fruit facial or Borneo body scrub. ($700–$800; Komodo Expedition from $15,175 per couple)

Aman’s only European property is in the heart of France’s Trois Vallées in Courchevel, a fashionable Alpine resort known for the excellence of its skipiste. The ski-in/ski-out hotel’s 31 rooms and suites are spacious and sleek, with oversize windows that afford views of the Alps and the village. Le Mélézin’s steam room, spa, and indoor swimming pool are ideal places to recover after a day on the slopes. ($1,000–$4,270)

With the opening of Amankora Paro in 2004, Amanresorts became the first foreign company to operate a hotel in the tiny Himalayan kingdom of Bhutan. Situated in Bhutan’s Paro Valley, 7,400 feet above sea level, Amankora Paro features 24 suites with wood-paneled interiors, wood-burning stoves, and views of the surrounding peaks. The Paro hotel is part of a network of five properties, located throughout the kingdom, that compose the Amankora resort. Others include the eight-suite Amankora Punakha, accessed by crossing a suspension bridge over a river; the 16-suite Amankora Thimphu, which is known for its spa treatments; and the eight-suite Amankora Gangtey, home to a flock of rare black-necked cranes. (From $1,050)

The only Aman property in the United States, the 40-suite Amangani clings to the crest of East Gros Ventre Butte, 7,100 feet above sea level in Jackson Hole. In the Amangani Lounge, two-story-tall walls of windows—set between floor-to-ceiling columns of Oklahoma sandstone—afford views of the Snake River Range and beyond. In addition to skiing, Amangani guests can go dogsledding, snowmobiling, snowshoeing, paragliding, hiking, canoeing, biking, hot-air ballooning, rock and ice climbing, and fly-fishing. The resort also offers safaris in the National Elk Refuge, home to elk, bison, bighorn sheep, and moose. ($565–$4,000)

Northwest Point Marine National Park in Turks and Caicos is home to some of the Caribbean island chain’s most secluded beaches, as well as to some of the world’s finest wall and reef diving. Amanyara, which borders the park’s reefs, consists of 40 pavilions in two styles: The timber-shingled Ocean Pavilions are nearly hidden amid the oceanfront vegetation, while the Pond Pavilions have timber sundecks that extend out over their namesake water features. The resort also rents out 18 privately owned Villa Homes, which feature infinity pools, outdoor salas, and private staffs. Amanyara’s dive center offers scuba instruction for guests of all skill levels. ($1,450–$12,000)