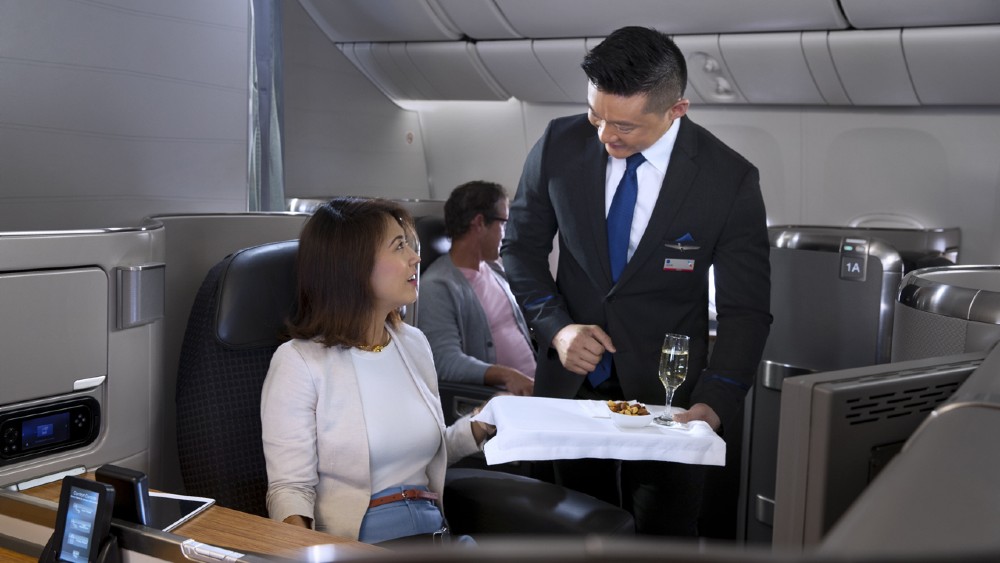 While the thought of “airplane food” may still not conjure up the best images, in recent years, several airlines have been trying to change that—at least for their premium cabin passengers. Air France, for example, has worked with Michelin-starred chefs like Anne-Sophie Pic and Daniel Rose to feature their dishes on-board, while Cathay Pacific had a limited-time relationship with chefs from Mandarin Oriental hotels. Beginning this month, American Airlines travelers will enjoy a taste of the gourmet life thanks to a new partnership between the airline and the James Beard Foundation that will feature dishes from James Beard Award-winning chefs on the menus in American’s Flagship First Dining rooms, Flagship lounges and First and Business Class cabins. The first dishes were introduced in the lounges on December 3; the on-board items will be launched on select routes beginning December 11.

Featured dishes include a spinach and ricotta Rotolo with hand-rolled pasta  Photo: Courtesy of American Airlines

The multi-year partnership—the first-ever between the Foundation and an airline—will focus on elevating American’s culinary offerings for premier travelers (which already includes an award-winning wine program), while also shining a spotlight on the Foundation’s core principles. “We are excited to take our ‘Good Food For Good’ mantra to all these passengers, and to showcase our members and our commitment to issues like broader diversity, female leadership, sustainability, and food waste in the culinary world,” says Claire Reichenbach, James Beard Foundation CEO. To that end, American will throughout the year be involved in the Foundation’s marquee programs, like the 20-city Taste America culinary pop-up series, as well as the James Beard Awards annual gala in Chicago and events at the James Beard House in New York City.

The first chef to be featured in the program is Sarah Grueneberg of Chicago’s Monteverde Restaurant & Pastificio, whose credits include a 2017 James Beard Award for Best Chef: Great Lakes, coming in as runner-up on Top Chef: Texas, and serving as Executive Chef of the Michelin-starred Spiaggia. An avid traveler (and American Airlines Executive Platinum status holder) herself, Grueneberg was excited about the chance to translate her flavorful, Italian-with-a-twist dishes for the skies, while taking into account things like how dishes get cooked and presented on the aircrafts, and how our taste buds change when 35,000 feet in the air. “I thought about what I would want to eat when flying, and kept it about simple, ingredient-focused dishes with fresh flavors, and not a lot on the plate,” she explains. “And for the lounges, I thought about creating more of a restaurant experience, and setting up the diner for their journey.”

After Grueneberg and her team presented over 30 dishes for consideration—lugging seven coolers of goodies from Chicago to New York City for a tasting—six winning dishes made the cut. In the Flagship lounges, you’ll find a Tuscan kale salad with beets, apples, goat cheese, and spiced seeds on the buffets, and three dishes—grilled Roman-style artichokes with black truffles, a mushroom Bolognese, and a dark chocolate budino pudding topped with candied citrus, olive oil, and a feuilletine crunch—in the Flagship First dining room. (Flagship First dining is currently available for First Class passengers in New York City, Miami, Los Angeles, and Dallas-Fort Worth.) On-board, passengers traveling in Flagship First and Flagship Business from the United States to Europe and South America, and transcontinental between JFK and Los Angeles or San Francisco, can enjoy artichoke ravioli with blistered cherry tomato sauce and green olive pistachio pesto, or spinach and ricotta Rotolo with pomodoro sauce and basil pesto—made with thin strips of pasta that are individually hand rolled, just as Grueneberg does in her restaurant.