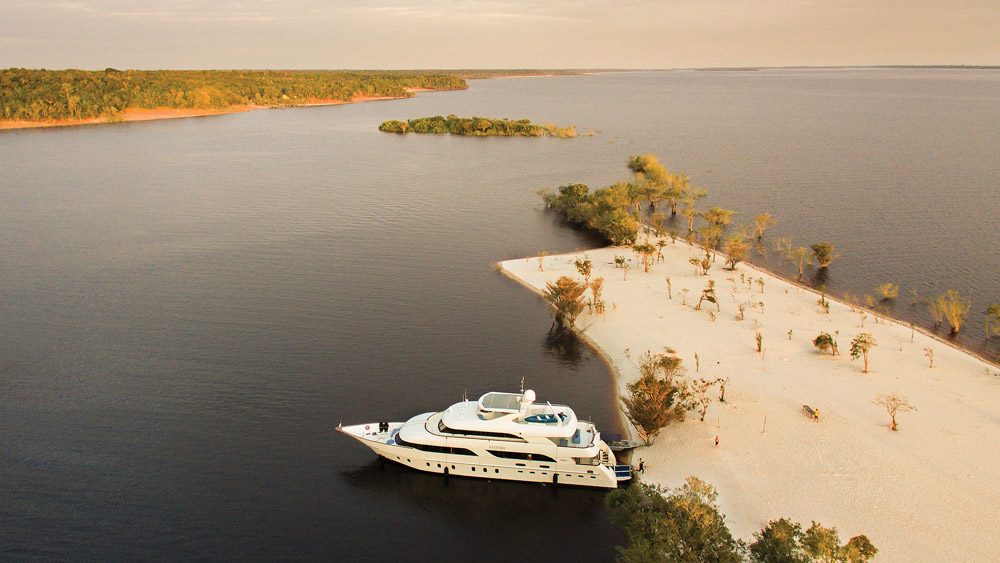 Its slender stalk stretches higher than a flagpole, bursting through the darkened canopy above to scatter tiny rays of sunlight across the ferns and vines around me. But Jeffson Araujo dos Santos knows this benign-looking tree is anything but. The machete-toting guide has brought me into the mysterious depths of the Brazilian Amazon rainforest to show me that, as he says, “the same thing in the jungle can help you—or harm you.”

By way of explanation, Araujo beckons me to feel the razor-sharp edge of the palm’s trunk; indeed, an unsuspecting explorer could easily be sliced by its well-camouflaged sharp shaft. But this malevolent palm offers a bit of mercy for its victims, Araujo explains, as he scrapes its stalk with his broad blade to produce a pile of pea-green shavings. “The same tree is also a natural antiseptic that clots the blood of an open wound.”

The legendary Amazon is indeed a force to be reckoned with, where nothing is as it seems and everything has a dark side. Palm trees that can cut you wide open and then offer a soothing salve to remedy your pain are just the beginning. Tales of terrifying creatures (from venomous bullet ants with the most painful sting on earth to vampire fish with a taste for human flesh) and fantastical plants (from corpse flowers to trees that can walk) enshroud this two-million-square-mile region in myth and mystery. But here in the dense jungle with Araujo—a former army lieutenant who spent nine years defending Brazil’s indigenous lands and people from loggers, miners, and other nefarious characters before launching his Jaguar Jungle Tours adventure company in 2002—the Amazon appears more precious than perilous. The forest is spoiling with delicious fruit; anything that isn’t “hairy, milky, and bitter” is safe to eat, Araujo says. That means tangy cupuaçu, passion fruit, acai, and citrusy bacury. Overhead, noisy kingfishers chirp and iridescent dragonflies flutter. At one point, I see a flash of electric blue—a magnificent morpho butterfly with giant sapphire wings. I’m enchanted. This is not the menacing place I’ve read about.

Perhaps that’s because just beyond this thicket of rainforest lies the Rio Negro, the Amazon River’s dark-hued tributary that runs from Colombia through Venezuela and into Brazil—an outlier among the murky brown waters for which the Amazon is known. I’ve been sailing this secret stretch of black water for days, and though I’ve encountered colorful toucans and leaf frogs along the way, I’ve yet to meet the frightening cast of critters that have long served as a warning to those daring enough to visit this fabled region.

I’ve also yet to encounter the riverboats that regularly cruise up and down the Amazon’s better-known stretches in neighboring Peru. Instead, I’ve been drifting down the Negro aboard the 117-foot Eugenio, a six-cabin superyacht where I’m sharing the scenery with Martin Frankenberg, owner of the São Paulo–based travel outfitter Matueté and the man behind a series of new trips to this covert offshoot of the world’s largest river. Frankenberg has assembled an A-list team of Amazon experts to accompany us on a five-day adventure: In addition to our yacht’s seven-person crew, there’s Kapïro Apurinã, a local guide raised in a small tribe not far from these very waters; Isabela Abreu, Matueté’s head guide; and Felipe Schaedler, the celebrated chef behind Brazil’s acclaimed rainforest-to-table restaurant Banzeiro. Sailing down the Negro, passing the occasional fisherman’s rabeta, it occurs to me that Eugenio is a floating microcosm of Amazonian life, where the vast region’s unique flavors, history, and culture converge in one place.

On board Eugenio, the Amazon is at its most comfortable. When I’m not resting in my sun-drenched master suite, I’m dining on Schaedler’s tasting menus packed with local ingredients—fresh river fish, manioc flour, Brazil nuts, and rare Yanomami mushrooms included—and taking cat naps on the deck after languid afternoon swims. All the while, the adventure of what lies just beyond—tree climbs and jungle hikes with Apuriña, canoe trips through snaking river canals with Abreu—is but an anchor drop or skiff ride away. One day, we sail up the brackish waters of the Ariau River to fish for piranhas and are surprised by a troupe of white-faced squirrel monkeys—one of which snatches a banana straight from Apurinã’s hand. Another day, we feast on freshly grilled fish and vegetables on a torch-lit beach. And one evening, we weave through the slender islands of Anavilhanas National Park, home to one of the largest fluvial archipelagos in the world. When the yacht moors near a stretch of white sand, I dive into the silky, warm water—mosquito-free, Frankenberg says, due to the river’s slightly acidic composition—just as a fiery red moon rises from the horizon. Everything looks fresh, feels fresh, smells fresh. I spot a radiant flare shooting through the sky that changes from scarlet to orange to emerald before disappearing. It’s my first meteor.

Ultimately, it is the Rio Negro’s waters that prove the most thrilling part of the adventure. Utterly unmarred by the presence of tourists—not to mention the dangerous predators that would make swimming in even the freshest waters of the Amazon River unthinkable—the tributary is a tangible (and literal) immersion into this thriving ecosystem. On my final morning aboard Eugenio, I am roused by the calls of cormorants just as we moor at Lago Acajatuba, a small bayou not far from the junction between the Negro and the Amazon. It is there that perhaps the Amazon’s most genuinely innocuous species can be found: the pink river dolphin.

Only a minute after I’ve dipped into the sunbaked waters, I feel the slippery skin of a rose-colored cetacean swimming past my legs. So close to nature, I’m paralyzed. In life, touching the animals is generally prohibited, and yet here, the animals are touching me. Dare I reciprocate? Before I can decide, 300 pounds of pure muscle explodes from the water, twirling in the air before landing on its back with a slapping splash. We’re playing, I realize. It would be rude not to reply. I reach my hands out and wait for a smooth belly to whirl past—and suddenly, we’re friends.

An hour of squeaking pinkness later, my swim is interrupted by a seaplane touching down to take me back to civilization. Aloft, I watch the river slowly morph into a thin black scrawl. From 6,000 feet above, Frankenberg points out the archipelago where we swam, the towering Samauma tree we scaled, and the golden sands where we watched the sky grow bright with stars. And then, right where the obsidian waters of the Negro meet the brown waters of the mighty Amazon, I spot Eugenio speeding down its dark pathway, flanked by neon-green treetops. There’s a long trail of white water stretching behind its stern, like an epic string of memories sparkling in its wake.