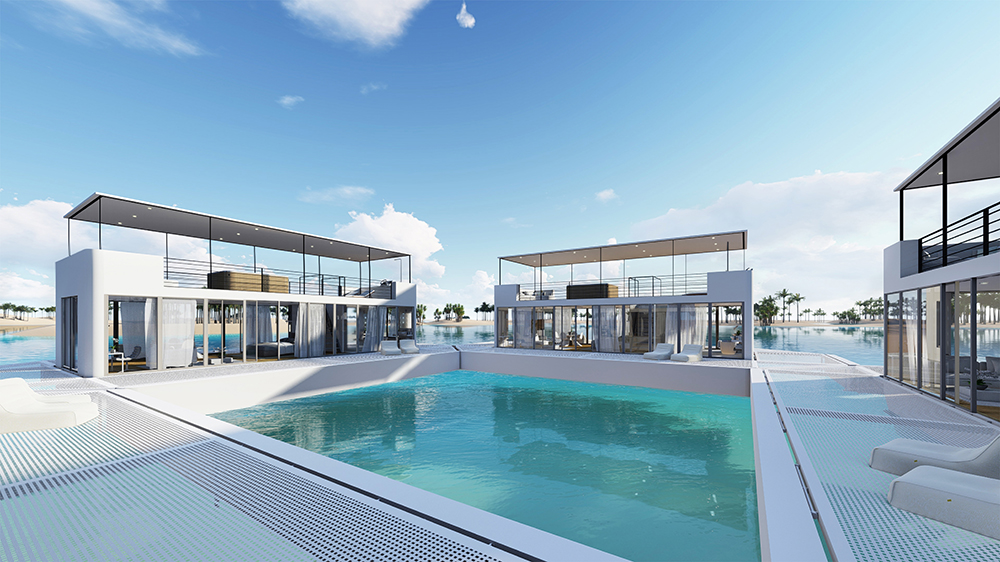 Miami will soon be home to the world’s first floating members-only club—if Arkhaus has anything to say about it, that is.

The company, helmed by Sam Payrovi and Nathalie Paiva of New York’s CSTM HAUS, plans to open a ritzy new overwater oasis for the city’s elite in just a few months. The duo purchased four of Arkup’s floating mansions for the new endeavor. Miami locals may have already spotted some of these revolutionary dwellings docked by Star Island.

The ultra-exclusive club, which will offer just 360 memberships, has been described as a floating Soho House. The 40-foot Arkup vessels will be arranged in a square and overlook a large, protected pool. Members will have access to nearly 8,500 square feet of space, along with an array of activities, amenities and events.

For the wellness set, there will be guided yoga and meditation classes. For the revelers, there are a number of bookable cabanas and daybeds by the pool, a rooftop Jacuzzi and DJ sets. There will even be a roster of weekly events, like, say, a cocktail masterclass with a noted mixologist.

“We’re building a culture that is excited to move the world forward and enjoy the fruits of its labor. Stepping onto Arkhaus will feel exhilarating and purposeful at the same time,” cofounder and CEO Sam Payrovi told Robb Report via email.

Similar to Arkup’s residential vessels, each of the club’s separate structures will be equipped with rooftop solar panels that can produce up to 12 kW of electricity to power everything onboard, plus the respective electric propulsion systems. The eco-friendly floating abodes can cruise at speeds of up to 8.5 knots and travel 30 miles on a single charge. While the club itself will remain mostly static, the individual vessels can detach for joyrides. You can also charter each one for private parties and events.

To top it off, the club will also feature a fleet of underwater drones that will be used to conduct local marine research, such as testing the toxicity and salinity levels in the water.

As for the fine print, you can now place a fully refundable deposit to reserve your membership. The current annual presale rate is around $6,200. When Arkhaus officially launches, membership will be priced at $10,000 a year. According to the company, a third of the spots have already sold out. After Miami, Arkhaus plans to open locations in LA, NYC, Chicago, Paris, Istanbul and Dubai.

Click here to see all the photos of Arkhaus.