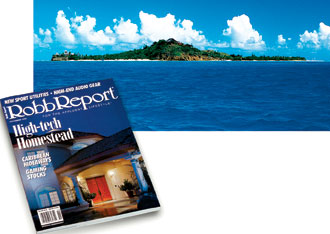 Our November 1994 feature “Caribbean Hideaways” may have inadvertently left some readers with the mistaken impression that lavishly appointed tropical vacation homes were the exclusive domain of celebrities, or that celebrities were the only people who sought the benefits of such retreats. The article allowed readers a peek inside the Mustique villas of Mick Jagger and Britain’s Princess Margaret. Also included were descriptions of Necker Island, Richard Branson’s resort in the British Virgin Islands, and golf course designer Pete Dye’s home near the seventh fairway of Teeth of the Dog, the formidable course he designed for the Casa de Campo resort in the Dominican Republic.

Though its premise was perhaps more appealing to devotees of Robin Leach (whose home on Jumby Bay Island was also featured) than readers of Robb Report, the article did offer insight into the elements that define a hideaway. Consider the passage explaining why celebrities find the Caribbean so inviting: “The myriad islands attract those who seek not only the warmer climes, but also the exotic natures of the islands, as well as the privacy and isolation that Caribbean locales afford.”

On the surface, the 10 resorts featured in this month’s cover story on hideaways, “Solitary Refinement”, might seem radically different from the celebrity-owned properties that we featured 10 years ago. Only one is located in the Caribbean (the Caves in Negril, Jamaica), and all are open to the public. But for those who visit them, they serve the same purpose and satisfy the same needs. While not restricted to a party of one, each is still extraordinarily exclusive, accepting only a very limited number of guests at a time. Their settings are in many cases even more exotic and certainly more varied than those found in the Caribbean—the lineup includes a former convent in the Netherlands, a ranch in Idaho, a family-owned island off the coast of Georgia, and a hacienda in Mexico.

The essential quality that the resorts and the homes share is an atmosphere of privacy and seclusion; however, the means of achieving this atmosphere is hardly standardized. Geographical isolation from the rest of the well-trafficked world certainly helps, but all worthy hideaways offer a sense of distance and detachment regardless of where they are located.   As the 1994 article notes, the Caribbean, “though sometimes seemingly overrun by masses of tourists and hordes of camera-toting sightseers from cruise ships, still can provide the peace and privacy sought by those who can afford to be anywhere.” Consider also Smoke Tree Ranch, one of the 10 exclusive hideaways featured in this month’s issue: Its entrance “lies but a horseshoe’s toss” from Palm Springs’ famous Palm Canyon Drive, but many of the town’s residents and undoubtedly most of its visitors are unaware of its existence.

Smoke Tree Ranch and the other properties featured in “Solitary Refinement” amply demonstrate that hideaways need not be restricted to private islands drenched in sun, ringed by beaches, and surrounded by turquoise waters (although those, too, can be inviting, and accordingly we do include two such hideaways in this issue: Double Island in Queensland, Australia, and Qamea Resort and Spa in Fiji). These resorts are deliberately obscure and often not easily accessible, but that is part of their charm. One need not be famous to enjoy the perfect spot to lie low, unwind, and forget what day of the week it is. You need only to discover it.