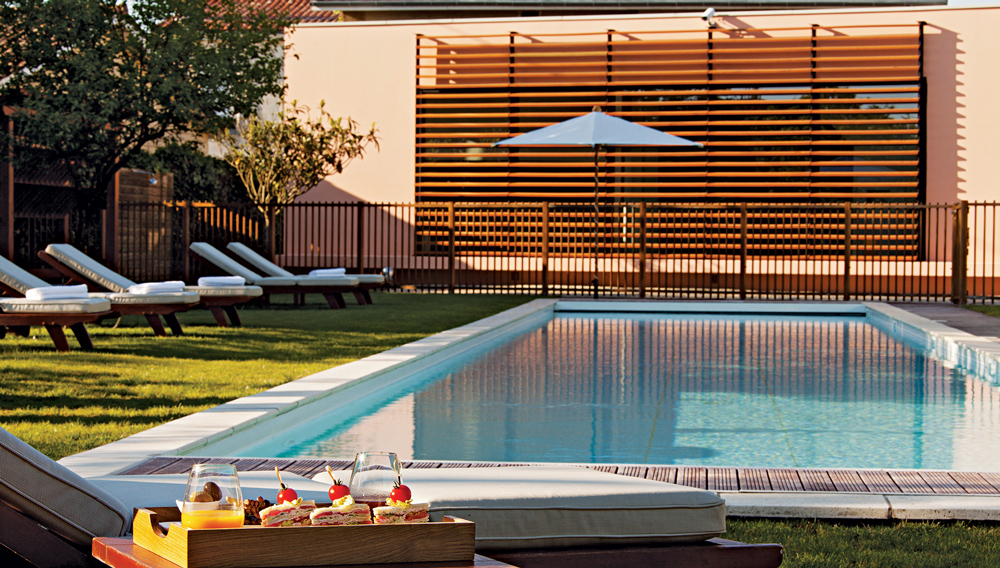 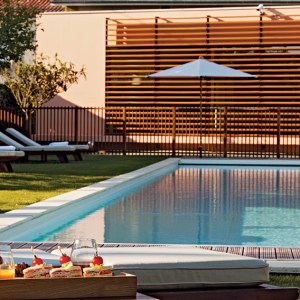 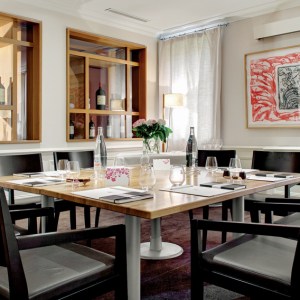 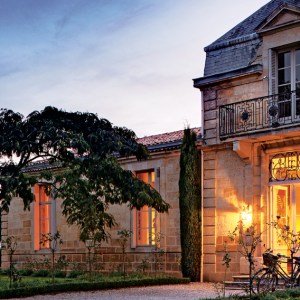 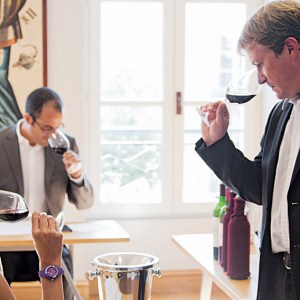 The owners of Château Lynch-Bages transform the tiny hamlet surrounding their vineyards and winery into a gracious retreat that pays tribute to the art of living well.

“Americans,” wrote the novelist Edith Wharton, “want to get away from amusement even more quickly than they want to get to it.” Certainly, my small group of compatriots and I confirm the latter half of this observation as we speed along country roads from the Loire Valley to Bordeaux. Ensconced behind the tinted windows of our two BMW sedans, we whip through bends in the road and canopies of chartreuse-colored spring foliage. As the black sedan in the lead veers left at a fork, I notice two helmeted figures emerging from the verdant shadows. “Slow down,” I tell my companion, who, having already spied the gendarmes, applies the brakes. A pair of menacing motorcycles approach us from behind, their lights flashing; but as we prepare to pull over, the riders shoot by us.

Our relief is only momentary: A few miles farther, we find our friends’ sedan marooned on the grassy roadside, the skeptical policemen, now dismounted, smoking cigarettes through the upturned visors of their helmets. Although we are only a short distance from our destination, Château Cordeillan-Bages in Pauillac, our much-anticipated arrival is delayed another three hours as various law-enforcement agents engage in negotiations over the fate of our friends and their car at the local constabulary. When at last we pull into the gravel courtyard of the sprawling château, our welcoming glasses of red wine taste all the sweeter for our legal ordeal.

The château has just opened for its season, which runs from March to the end of November, and the serenity of its grounds and sun-bathed facade prove the perfect tonic for unsettled nerves—as does the velvety, mineral-laden wine, which comes from the hotel’s own 5 acres of vines. Not surprisingly, the château, like so many other significant structures in Pauillac, owes its existence to winemaking. This region, after all, is home to three of the five estates awarded first-growth status in the Bordeaux classification of 1855: Château Latour, Château Lafite Rothschild, and Château Mouton Rothschild. Although Cordeillan-Bages was not classified in 1855, it is mentioned in literature of the period as producing a wine that commanded prices similar to the fifth-growth estates; and indeed, in the mid-20th century, its vineyards came into the possession of the most famous Fifth Growth, the adjacent Château Lynch-Bages. Jean-Charles Cazes, Lynch-Bages’s owner, brought all of the vineyards surrounding the small village of Bages under his ownership, but the elegant old house held little interest for him; not until his grandson Jean-Michel Cazes, the current owner of Lynch-Bages, purchased the manor was its future assured as a haven of hospitality in the heart of France’s most beloved wine region.

For the present generations of the Cazes family, transforming the abode into an award-winning Relais & Châteaux resort was much more than a business proposition. “My father, Jean-Michel Cazes, always had the urgent belief that Bordeaux can never rest on its laurels but needs to communicate with those who consume its wines,” says Marina Cazes, director of digital strategy for Lynch-Bages & Cie., the parent company that manages the family’s many investments. “When he set up Cordeillan-Bages, his aim was to make wine accessible.”

The renovation and repurposing of the residence serves as the tangible expression of a philosophy that Jean-Michel developed on his return to Pauillac in the mid-1970s. After studying engineering in France and the United States, he took a position in the computer industry, but in 1971, when his father, André, suggested selling Château Lynch-Bages (which his grandfather Jean-Charles had bought in 1939), Jean-Michel reconsidered his path in life. His technical background provided him with the necessary skills to modernize the aging winery, and his reverence for the past, the landscape, and the people and their traditions instilled in him the desire to unite local history, fine wines, cuisine, and culture in such a way as to entice visitors to experience Bordeaux’s unique brand of gracious living.

Over the next 15 years, he revamped the winemaking facilities—a period that, incidentally, yielded some of the estate’s most-acclaimed vintages, including 1982, 1988, 1989, and 1990. Yet he never lost sight of the importance of giving admirers the opportunity to visit and appreciate the countryside and its terroir. “In fact, 1989 was the year we hosted a gala dinner that marked the inauguration of the new style of Lynch-Bages,” recalls Marina. “After the success of the fete, he realized that there was much to be done to improve the experience for the wine tourists who were traveling to the area to visit the vineyards. He was one of the first to open his château for guided visits, and he invited modern artists to use his cellars for exhibitions of their work.”

Jean-Michel purchased Cordeillan-Bages and began converting the edifice into an elegant hotel. A wing was subdivided to create 24 distinct rooms, each of which opens onto the central courtyard, whose principal feature is its azure pool set amid manicured lawns; a separate stone building houses four suites. While the château’s exterior reflects tradition, the interiors emphasize modernity, combining sleek steel and upholstered furnishings with jewel-toned works of contemporary art. Guests enjoy not only these airy accommodations but also the property’s Michelin two-star restaurant where, this evening, we are to savor the talents of chef Jean-Luc Rocha.

Still, wine remains the focus at Cordeillan-Bages, where the cellar contains more than 1,500 different bottlings. “Organizing wine tours and tastings are frequent requests,” notes house manager Céline de Labrousse. “We are able to arrange visits and tastings to prestigious properties in Pauillac, including Latour, Mouton Rothschild, and beyond.”

Invariably, such tours begin with Lynch-Bages itself, which is at the center of the hamlet of Bages, a short walk from the hotel’s grounds. The facility mingles past and present, connecting the state-of-the-art facilities constructed by Jean-Michel to the old vat house, which dates to the 19th century. “Lynch-Bages is very special to us, because this is where my family’s roots lie,” explains Marina. “It was the first estate acquired by my great-grandfather Jean-Charles Cazes in the late 1930s.” In contrast to the ancient beams of the old winery, the tasting rooms are pristine, postmodern compositions of glass and burnished concrete. Here, enthusiasts can sip not only Lynch-Bages wines (we sample the excellent 2009, a dense composition of plum, fig, smoke, and vanilla) but also, in wine courses conducted by L’École du Vin du Bordeaux, selections from other producers in the Médoc.

Those wishing to take their experience a step further and actually make wine have another option as well. “Since 2012, Viniv is our winemaking facility, located in the village of Bages, which offers members the opportunity to design and bottle their own barrel of wine,” Marina tells us. “The chance to make your own fine wine is, we believe, a remarkable way to develop an appreciation and understanding of one of life’s great pleasures.”

The village lies outside the doors of Lynch-Bages, and as we stroll toward Viniv’s chai, located across the stone-paved square, we note a pétanque court, a bakery, a bistro, and a variety of shops. We are told that, in 2003, Jean-Michel considered expanding Lynch-Bages’s storage capacity; when an architect suggested that he tear down the decaying structures of the mostly abandoned hamlet, the entrepreneur realized that these near-ruins presented yet another opportunity, and so he once again exercised his considerable talent for restoration.

By far the most ambitious of Bages’s enterprises, Viniv is co-owned by the Cazes family and Stephen Bolger, an American expatriate who, after leaving a Chicago-based industrial-minerals company, decided to do something more aligned with his personal interests. This full-fledged winery with deep relationships in the most prestigious appellations produces individual barrels of fine wine for those who want the chance to make their own Bordeaux. For between $11,200 and $19,900 per barrel (delivered to the warehouse in Napa, Calif.), clients can select their vineyards and varietals, participate in the winemaking, and blend and bottle their own wine. Throughout this process, they are guided by the expertise of the Lynch-Bages team and the renowned oenologist Eric Boissenot, who consults for Château Lafite Rothschild, Château Latour, Château Margaux, and Château Mouton Rothschild. “Viniv basically acts as the link between the hospitality and the wine production at Lynch-Bages,” Bolger observes. “It allows people to get involved while having this environment that they can stay in. The Cazeses’ investment in the village offers a home away from home, where everything is located at a central point—and a beautiful central point at that.”

Later, as we linger over the remains of chef Rocha’s masterful meal—a flavorful fusion of local ingredients culled from land and sea—we reflect on the truth of Bolger’s remark. The infinite charms of this fabled region seem to be concentrated in the finite limits of this modest town. We forget the morning’s harrowing rush and put the next day’s drive out of mind. And as one of our party suggests trying our hands at making a barrel of wine, we all realize that Bages is one of the few amusements from which even the most impatient American will hesitate to get away.