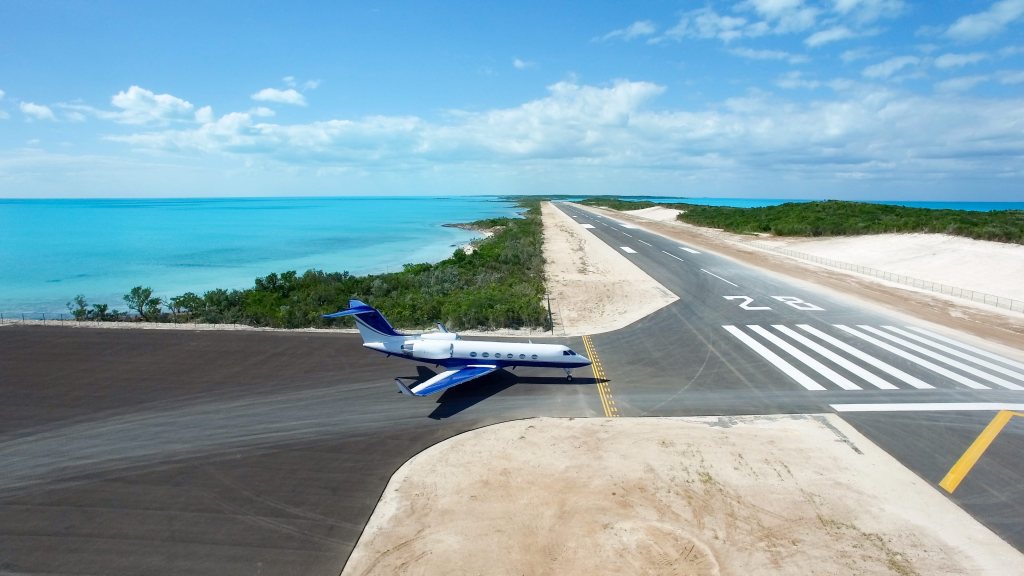 As one might expect of a Bahamian tropical paradise, Blue Island abounds with powdery beaches and romantic coves, mango, coconut, and banana trees, and miles of trails for hiking and biking. At the heart of this 707-acre idyll—the largest private island in the Bahamas—is a gleaming white six-bedroom residence rises from a hilltop that reaches 110 feet above the sea.

But Blue Island (formerly known as both Innocence Island and Hog Cay) owes its allure to more than its serenity and size. “Blue is the only private island in the Bahamas with its own world-class runway and jet port,” said property manager Steve Donovan as our plane—a Cessna Citation X—touched down lightly on the nearly 6,000-foot-long landing strip and taxied to the far end of the runway. “The air field is built to accommodate planes up to the size of a Boeing Business Jet.”

Perhaps even more appealing is the fact that visitors to Blue Island, which is located among the group of private islands in the super-exclusive Exumas chain, can clear customs right on the landing strip. Indeed, waiting to welcome us to the Bahamas was a customs and immigration official who stood by a second, smaller plane at the air field. Such a seamless journey is the ultimate in privacy, and completely a rarity for a private island. “Your trip to other private islands may begin in a Falcon, Global, or G5,” Donovan said, “but to get where you’re going you have to transfer to car, and then likely a boat, ferry or sea-plane.”

The conveniences of a jet-accommodating air field and customs capabilities put many of the world’s potential private-island owners within easy reach. “We are just two hours from New York, four-and-a-half hours from Los Angeles, and under eight hours from London,” Donovan said. “It makes Blue Island both the most exclusive and the most accessible private island in the Bahamas, and likely the world.”

What sets Blue Island apart, however, isn’t just what’s there, but what isn’t—tourists. “There is virtually no place you can go that has not been discovered or developed and turned into a mass-market destination,” Donovan said. “One of the only places left to escape the tourists and paparazzi is a private island, where the ocean becomes a kind of moat.”

Thus the appeal of the Exumas for Bernard Arnault, Johnny Depp, John Malone, David Copperfield, Faith Hill, and the Aga Khan. “They are all fabulously rich, and they all own lavish hideaways in the Exumas. But no matter how wealthy they are, there’s one thing Blue Island has that nobody else has.”

To be sure, Bernard Arnault is one of the wealthiest people in the world, and Johhny Depp might be one of the world’s biggest movie stars, but they can’t accomplish what Donovan and I were doing today—flying to Blue Island for lunch and returning to Palm Beach in time for afternoon cocktails. It was the kind of experience some might say money or fame can’t buy. Except that now it can because Blue Island—beaches, docks, main house, observation towers, iguanas, air field, and all—is for sale for $125 million.

“This isn’t like real estate anywhere else in the world,” Donovan said. “You can’t compare comps, or even features and acreage, because of its natural beauty, privacy and location Blue Island isn’t like any other place on Earth.”