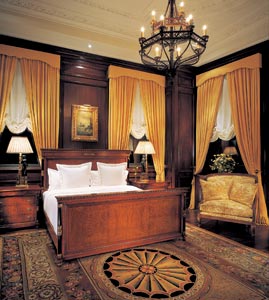 In the late 1990s, Lucien and Karen Remillard, a husband-and-wife business team who had enjoyed success developing real estate and producing movies, ventured into the hospitality industry by purchasing the historic (circa 1870) and then-vacant Merchants Bank building in Old Montreal. While preserving its original sculptures and moldings, the Remillards began converting the structure into a luxury boutique hotel—a lodging option that was at the time difficult, if not impossible, to find in the city. However, when the transformation was complete, it seemed as though the timing of the endeavor could not have been worse; the opening of the 61-room Hotel Le St-James in the spring of 2002 was soon followed by one of the dreariest economic periods in Canada’s recent history.

In early 2003, several SARS cases were reported in Toronto, and the ensuing alarm spread throughout Canada. SARS arrived on the heels of a mad-cow scare that had prompted the United States to halt Canadian beef imports and further chill an already cooling economy.

Nevertheless, the St-James has thrived. Indeed, last year one guest claimed the Terrace Apartment—a 5,000-square-foot suite with two bedrooms, a private entrance, and a wraparound terrace—for the entire summer, at a cost of $5,000 Canadian per day (approximately $3,750 U.S.). “We never even knew his real name,” says Elizabeth Glimenaki, the hotel’s director of sales and marketing.

Like other St-James regulars, the anonymous guest is doubtless someone with an appreciation for exacting yet discreet service and soothing diversions. Leave your room for a massage in the underground, candlelit spa that formerly served as the Merchants Bank’s vault, or for afternoon tea in the Grand Salon, and when you return, your clothes will be folded and your ice bucket full. Room-service meals prepared by the in-house chefs (who also prepare the breakfasts, lunches, and dinners served in the Grand Salon) are available 24 hours a day, and the dishes can be whatever you desire—from lamb to quail to steak frites.

Each room is individually decorated with furniture, rugs, and paintings that designer Jacques Bouchard acquired while traveling the world with the Remillards over a three-year period. While the furnishings are antique, the hotel’s amenities are cutting-edge. You change channels on the 42-inch plasma television using the touchscreen display of the Inncom telephone, a system that also controls the room’s lighting and climate, operates the volume of the Bang & Olufsen CD player, and connects to airline representatives.

Much of the hotel’s appeal can be credited to its Old Montreal location, which allows easy access to the historic district and to eateries such as the recently reopened Toqué! and Nuances in the Casino de Montréal. But while the city’s cultural and gastronomic attractions may draw visitors to the St-James, the appeal of the hotel itself is magnetic enough to discourage guests from ever venturing beyond its doors.