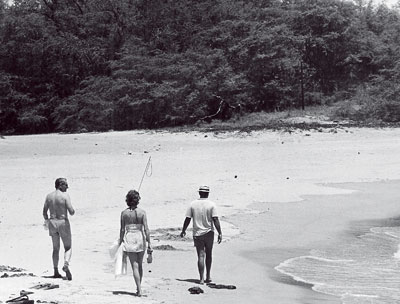 Terms such as environmentalism and ecotourism had yet to be coined when Laurance S. Rockefeller (1910–2004), grandson of Standard Oil founder John D. Rockefeller, built Caneel Bay on St. John and the Mauna Kea on Hawaii’s Big Island. But for the visionary scion—who, as one of America’s first venture capitalists, helped fund Eastern Airlines, McDonnell Aircraft, Intel, and Apple—preservation of his resort’s surroundings was the highest priority.

A spokesman for the environment during five presidential administrations, Rockefeller lent his stature to the fledgling conservation movement and contributed funds to major preservation projects. In the 1950s, to protect St. John from overdevelopment, he purchased a large section of the Caribbean island and donated 5,000 acres to the U.S. government to be safeguarded as a national park. He also initiated construction of Caneel Bay, a luxury resort that, in lieu of decadent buildings and grand ballrooms, featured unobtrusive accommodations, seven pristine beaches, and plenty of space for people—and the local donkeys—to roam. The resort, now operated by Rosewood Hotels, has remained true to Rockefeller’s vision: Caneel Bay rests within the USVI National Park and features guest rooms with no phones or TVs.

In 1960, Rockefeller purchased a 500-acre parcel on the Big Island that included the stunning crescent beach of Kaunaoa. There, in 1965, he opened the Mauna Kea Beach Hotel, an Asian-themed resort set back from the shore behind a coconut grove. He decorated the hotel with an expansive collection of Pacific art, and he enlisted Robert Trent Jones to design an oceanfront golf course. However, holding to his belief that the greatest luxury was open space, Rockefeller left Kaunaoa and much of the remaining acreage untouched.