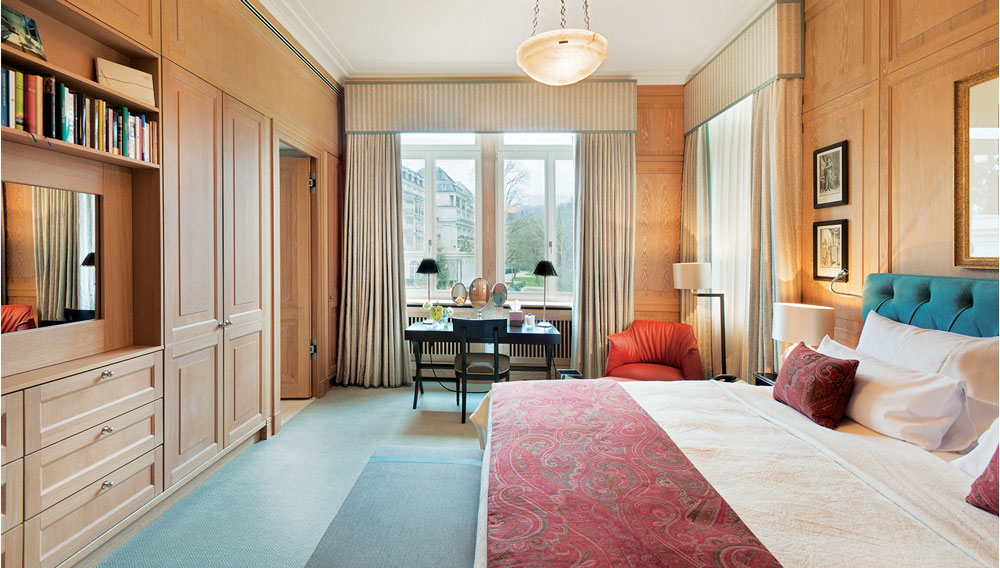 I squeeze my eyes shut and clench my fists, digging my fingers into my sweaty palms in an attempt to hold still as Jürgen twists my feet forward then backward then left then right. Utterly German in his approach to reflexology, the therapist—whom I learn between groans of pain has been practicing the Eastern technique for more than 25 years—locates my weak spots and then kneads away at them with merciless precision.

“Your kidneys are thirsty,” he tells me as he jams his thumb into my arch and wiggles it up and down. Then, moving to the flesh just beneath my little toe, he stabs the tip of his fingernail deeper and deeper until a low grunt escapes my lips. “You have just gotten off a plane, yes?” he asks. “You should have a massage tomorrow.”

Jürgen is both well intentioned and well informed: I have indeed just arrived in Baden-Baden, Germany’s oldest and greatest sybaritic escape. Set in the northern foothills of the Black Forest, the resort town was founded nearly 2,000 years ago by the Romans, who, upon discovering the natural hot springs flowing beneath its soils, constructed elaborate bathhouses intended to cure everything from arthritis to fatigue. A couple of millennia later, the grand healing tradition of Baden-Baden (whose name means “to bathe”—twice) has taken a contemporary turn with the debut of Villa Stéphanie, a 15-room wellness retreat that incorporates spa and beauty treatments with fitness, nutrition, and medical therapies.

Opened in January as part of the Oetker Collection, Villa Stéphanie adjoins the brand’s Brenners Park-Hotel & Spa and the Haus Julius medical facility. Accordingly, experiences at the villa can be as regimented or as relaxing as guests desire. Itineraries based on individuals’ body types, preferences, and abilities may include nutritional consultations, fitness classes, and medical checkups, along with such treatments as Sisley massages and SkinCeuticals facials. Visitors can opt for healthy menus designed by Villa Stéphanie’s nutritionists, or choose instead the Michelin-starred cuisine at Brenners Park-Restaurant. The 15 modern accommodations also house a wealth of choices: Suites include private fitness areas and Finnish saunas, and every guest room is equipped with a digital-detox button that suspends Internet and mobile connectivity.

“Our programs are entirely up to our guests,” says Hans-Peter Veit, the spa manager at Villa Stéphanie. “We provide healthy options and encourage guests to work toward their goals, but we also believe that a stay here is a holiday that should be enjoyed.”

Following Veit’s—and Jürgen’s—advice, I book an Anika Organic Luxury Vitality wrap, during which my therapist massages black mud into my skin to rid my body of toxins. An hour later, I am relaxed and restored, my shoulders no longer ache, and my kidneys feel fully quenched.