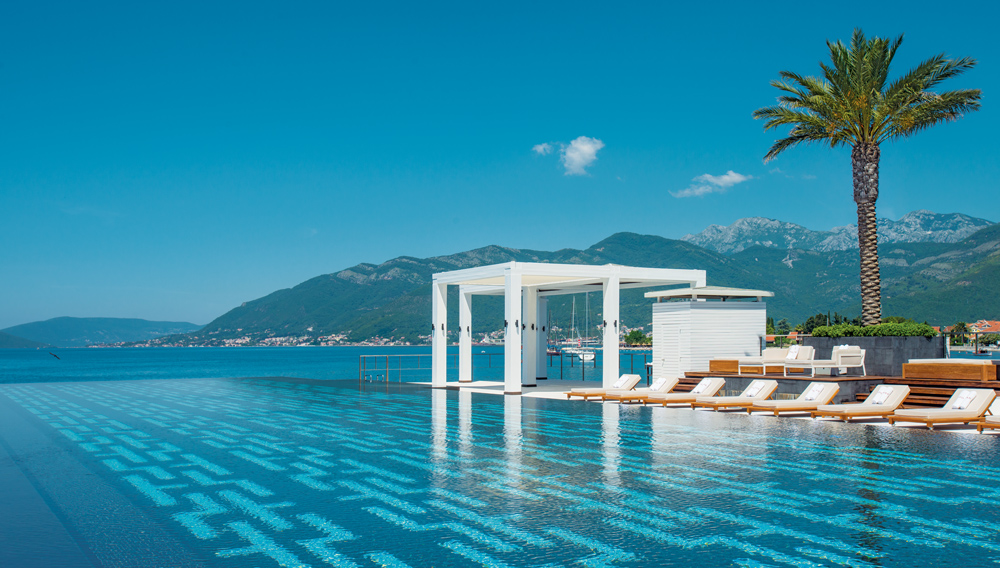 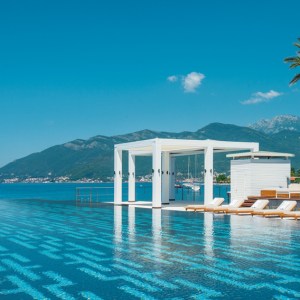 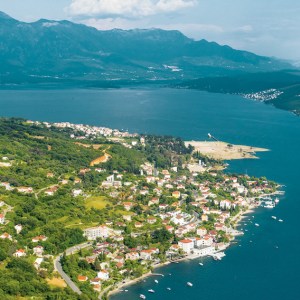 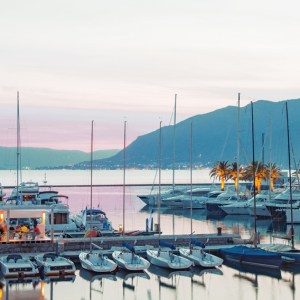 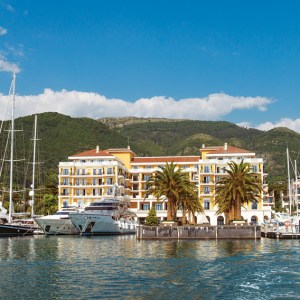 Anchored by the new Porto Montenegro, a former Yugoslav territory with a troubled past is fast becoming the Mediterranean’s next great escape.

A lazy breeze blows over the Bay of Kotor, gently nudging cocktail napkins and menus on crisp white tabletops at Al Posto Giusto. It is only 10 am, but the Italian restaurant in Porto Montenegro is packed, its fashionable patrons awash in the August sun’s golden glow. Perfectly coiffed men wearing mirrored sunglasses eat frittatas with Bloody Marys, while their long-legged companions sip Champagne between cigarette puffs. All are dressed as though for an evening out—which, it occurs to me as I shuffle down the restaurant’s catwalk-like terrace, they might just be: Last night’s party may only now be coming to an end.

I settle into a padded turquoise chair across from Becki Milton, a petite Brit who arrived in Porto Montenegro in 2013 to sell space in the development’s new marina. The 60-acre community, located within the coastal town of Tivat, opened in 2009 with fewer than 100 berths; since then, its marina has quadrupled in size. One look at the sailboats and superyachts anchored alongside Al Posto Giusto tells me Milton has been quite busy.

“See that white one over there?” she says, pointing over my shoulder at a behemoth Lürssen with the name Queen K scrawled across its side. “It’s 70 meters. And the one just behind it? That’s the Mayan Queen, owned by one of the richest men in Mexico. It’s 90 meters. We had the Eclipse here earlier this year, and the Maltese Falcon is on its way. We already have a waiting list, and the bloody marina’s not even fully built!”

Porto Montenegro’s popularity is certainly understandable. Located in an unspoiled corner of the Adriatic Sea, the yachting destination is surrounded by glistening fjords and emerald mountains. But the development’s site—a former Yugoslav naval shipyard known as Arsenal—was not always so sexy. When Yugoslavia started to dissolve in 1991, leaving Montenegro to form a coalition with neighboring Serbia, the waterfront was abandoned. For more than a decade, it remained a derelict backwater blighted by asbestos-laden barracks, retired submarines, and corroded ships. That began to change in 2006, when the Canadian businessman Peter Munk purchased the land directly from the Montenegrin government. Newly independent, the country appeared ripe for tourism, and Munk—who would soon be joined by LVMH Moët Hennessey Louis Vuitton’s chairman, Bernard Arnault, and other investors—saw a golden opportunity to build the Adriatic’s first megayacht marina. Porto Montenegro made its debut three years later, with a residential complex and 85 berths.

Today, Porto Montenegro has completed 400 of an eventual 850 berths, 176 residences in six Mediterranean-style complexes, and the Regent Porto Montenegro hotel, a nautically themed retreat that opened in August with 86 rooms, three restaurants, and an Italian garden. The latest residential section, Ksenija, is scheduled to debut this summer with 48 one- to three-bedroom residences priced from about $433,500 to more than $2.5 million. Porto Montenegro is also home to upscale boutiques—resort wear by Heidi Klein, jewelry by the Italian designer Carolina Bucci—as well as the Naval Heritage Collection museum, which offers guided tours of a refurbished Yugoslav submarine.

Winding through the marina and past a massive crane building yet another jetty, I notice the berths are indeed at capacity, filled with vessels from around the world—Mimi from Miami, Stargazer from the Channel Islands, Eva from London, Eternity from Hamburg, Germany. Arriving at Lido, Porto Montenegro’s members-only club, I pass an infinity-edge swimming pool that was constructed from an underwater elevator once used for raising submarines. A trio of young men are perched on the pool’s edge, trying to get a closer look at a passing schooner, while a handful of couples sip cocktails in the club’s white cabanas.

“I imagine this is what Monaco was like 30 years ago,” James Wates tells me over a round of Dark ’n’ Stormys on the Lido’s rooftop terrace. The United Kingdom–based businessman purchased a home at Porto Montenegro in 2010, enchanted as much by the country’s untouched beauty as by its untapped tourism industry. “The Mediterranean is all so terribly busy. You can’t get into the restaurants. You can’t get to the marinas. But Montenegro isn’t like that. You can come here in the banging high season, and it still doesn’t feel crowded.”

The bustling berths and the morning patrons at Al Posto Giusto aside, Wates has a point. The afternoon crowd on Lido’s rooftop is small and evidently well-heeled. Over by the bar, a dark-haired gentleman accompanied by his fiancée is said to be the owner of one of Switzerland’s largest banks. Lounging on the terrace, a Ukrainian supermodel in a flowing floral dress is surrounded by a cluster of admirers. And rumor has it the Serbian tennis champ Novak Djokovic—who moors his yacht in Porto Montenegro’s marina—may be in town this weekend.

If Montenegro is the last unspoiled refuge in the Mediterranean, however, it may not remain that way for long. Last year, the World Travel and Tourism Council listed the country as the fastest-growing destination in the world, and recent statistics predict an average annual growth of 8.1 percent in tourism revenue over the next decade. Unsurprisingly, Porto Montenegro is not the only project hoping to cash in.

Just across the Bay of Kotor from Porto Montenegro, on a crescent-shaped beach on the edge of the Luštica Peninsula, the 1,700-acre Luštica Bay development is scheduled to open in 2016. Upon completion (targeted for 2025), the community will include a 176-berth marina, seven hotels, a Gary Player–designed golf course, and more than 1,500 apartments and villas overlooking the Adriatic. A 15-minute speedboat ride west of Porto Montenegro, in the village of Kumbor, the 60-acre development Porto Novi is also under construction. Opening in 2017, the community will include a 250-berth marina on Tivat Bay, a One&Only resort with 550 residences, and a village with dozens of restaurants and boutiques.

But the story of luxury tourism in Montenegro—both present and past—begins with the island of Sveti Stefan. Located roughly 20 miles south of Porto Montenegro, just outside the lively beach resort of Budva, the 3-acre isle houses a 15th-century fortified fishing village clustered with red-roofed cottages. The village was converted into a resort in the 1950s and soon found favor with international celebrities including Sofia Loren, Elizabeth Taylor, and Orson Welles. The property put Montenegro on the tourism map, but, much like the Arsenal, it became a casualty of Yugoslavia’s unstable political climate and was ultimately abandoned in the early 1990s during the Balkan Wars. Sveti Stefan’s second renaissance came nearly 20 years later, when the island reopened as a 30-room Amanresorts hotel in 2011.

Compared with the sparkling new village at Porto Montenegro, Aman Sveti Stefan is positively ancient. A narrow footbridge runs from the mainland to the fortressed island, which rises just offshore like a giant sand castle. Within the village walls, cobblestone paths lead to jasmine-lined cottages and an open-air piazza with café tables served by an enoteca and an antipasti bar. Guest rooms offer Aman’s modern take on traditional Dalmatian Coast interiors, with whitewashed walls, dark wood floors, and simple low-slung furnishings.

Eight additional suites, as well as a restaurant with a wisteria-covered loggia, are set within Villa Miločer, a former royal palace on the mainland. I hike from the island through a coastal pine forest to reach the palace, which sits amid cypress and olive trees along a sandy beach. Just beyond Villa Miločer at the Aman Spa, which opened last May on a private cove of Queen’s Beach, I stumble upon a fashion shoot. Willowy models in lingerie—or perhaps they are bikinis?—sprawl along daybeds set beside shallow reflecting pools, while a young man with highlighted hair and leather bracelets snaps away intensely with his camera. The setting is indeed stylish, with an 80-foot-long glass-enclosed swimming pool and four 700-square-foot treatment rooms, each outfitted with a fireplace. Just below a manicured lawn, the fashion shoot continues on the beach’s sugary pink sand, with Sveti Stefan’s magnificent stone ramparts gleaming in the distance.

Following an aromatherapy massage at the spa, I make my way back to the island and up to Sveti Stefan’s winter terrace for a glass of Vranac, the local red wine. Perusing the menu of Montenegrin delights—grilled octopus with pesto, macaroni and cheese with black truffles and Njeguška pršuta ham—I am interrupted by the sound of a speedboat zipping into the bay below. Waves ripple through the calm waters, leaving a V-shaped wake to spread toward the horizon, where the sun is preparing to set. Moments later, another boat—this one bigger and zippier—appears. Then another arrives. Then another. A cool wind comes in just as the last sliver of daylight shrinks to nothing. The party is just getting started.