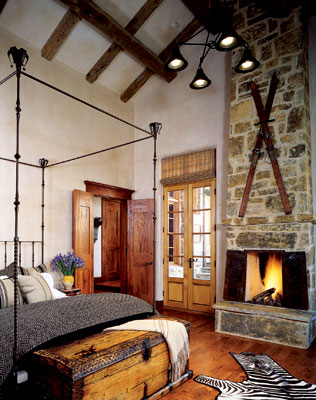 Over the past year, no Best of the Best category has grown as quickly as the private residence club has. Companies in this increasingly crowded field promise the benefits of vacation home ownership minus the inconveniences, offering their members access to elegant estates in multiple locations at a fraction of the cost of a single upscale residence. In early 2004, the industry consisted of eight companies; today there are 20 and counting. According to Ragatz Associates, a consulting and research firm that monitors the residence club market, the industry now generates $1.5 billion in annual revenue. In this burgeoning field, a new player with an exclusive, equity-based model has emerged as a leader.

“I wanted to create a small collection of significant homes in the finest destinations, avoiding anything that would feel like a vacation rental or a time-share,” says Graham Kos, founder and CEO of Solstice, a tight-knit membership organization that debuted in the spring of 2004. Kos’ program is limited to 42 members, who share seven homes and a yacht. As with a country club equity model, Solstice participants can reap the benefits of membership appreciation, but only when they choose to sell their stakes.

Solstice differentiates itself further from the residence club field through the quality and value of its estates. The program’s Basque Retreat in Telluride, Colo., is a $5.75 million home set amid acres of aspen groves at Aldasoro Ranch and decorated (by Kos’ wife, Shay) to reflect the heritage of the farmers who settled the area in the 19th century. In Paris, the club’s members enjoy a two-story, 17th-century pied-à-terre on the Ile St. Louis near Notre-Dame. The program’s future Napa Valley, Calif., residence is a historic stagecoach inn that is being transplanted, stone by stone, from Fredericksburg, Texas, to the Solstice Vineyards near Rutherford.

Solstice also owns a property on St. Bart’s in the French West Indies and one in Cabo San Lucas, Mexico (with four en suite bedrooms and an au pair unit), and the program offers its 90-foot Dover yacht, Solstice, in the waters of the Bahamas in spring, off the shores of Belize in winter, and off the New England coast in summer. By this fall, an $8 million Aspen home and a villa in Florence, Italy, will be available for occupancy.

Because it manages only a few properties, Solstice dedicates a significant amount of time to the development and design of each, utilizing antiques and custom-made furnishings that reflect a particular estate’s unique location. Equally important, Solstice’s limited membership results in flexibility when planning vacations and the possibility of longer stays at residences. The program’s Signature Platinum level ($725,000 membership fee, $35,000 in annual dues) guarantees eight weeks of access, and the Signature Membership ($445,000 plus $22,000 in annual dues) provides four weeks’ worth. Members at either level may stay past their allotted times for $350 per night. This freedom—and the program’s equity model and high-quality homes—may help explain why only a handful of Solstice’s 42 memberships were still available when this issue went to press.

In 1999, Abercrombie & Kent Destination Clubs popularized the concept of the private residence club. “I wanted to help create a company that reflected the needs of the people we serve, those who live in a post-consumer culture,” recalls Rob McGrath, one of the program’s cofounders. “They have bought everything they are going to buy, and for their vacations they want something not measured in dollars and cents.”

Apparently, McGrath, now A&K Destination Clubs’ president and CEO, was onto something; in 2004, the program’s membership rolls more than doubled. A&K spent $80 million in real estate acquisitions in the last year, including residences at the Castello di Reschio in Tuscany, on the Boulevard St. Germain in Paris, and at Knightsbridge in London. The company also purchased several properties in the Caribbean, as well as three new catamarans to complement its fleet of yachts and sailing vessels.

All in the Family

Exclusive Resorts, which launched in 2002, is one of the pioneers of private residence clubs. Brothers Brad and Brent Handler founded the company after taking their wives and children on a vacation to Hawaii, where they stayed in a high-end hotel and found the experience lacking. The siblings and their wives objected to the dearth of family-friendly activities and residence-style amenities, so they decided to create their own resort alternative.

In the three years that followed, the Handler brothers, with AOL founder and Exclusive Resorts chairman Steve Case, amassed a $700 million real estate portfolio. The company, which has approximately 1,200 members, owns an astounding 175-plus properties that are open for occupancy and has another 175 in development. All of the residences are family-friendly.

Exclusive Resorts properties have an average value of $2.5 million to $3 million and are open to members who pay a one-time $375,000 fee—80 percent of which is refundable if the participant leaves the club—plus annual dues that range from $15,000 to $25,000, depending on the membership tier (30, 45, or 60 days). Exclusive Resorts has added an affiliate membership with 15 days of access for $185,000 plus dues. To reach their program’s residences in locations around the world—including the Fiji Islands, Costa Rica, Turks and Caicos, and Chamonix, France—Exclusive Resorts members can charter private aircraft through the company’s partnership with Marquis Jet.