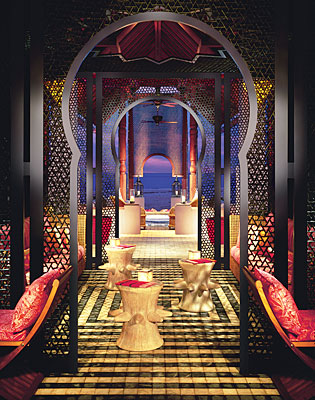 Cabdrivers, bellboys, and even randomly encountered people on the streets of Langkawi will tell you about the legend of Mahsuri, a 19th-century princess whose husband, after believing a false accusation of adultery, sentenced her to death. As she lay dying, Mahsuri issued a curse on the Malaysian island that, she declared, would last for seven generations. That time span included a Siamese invasion, droughts, floods, famines, and Japanese occupation, but the hex supposedly ended in the 1980s with the birth of an eighth-generation descendant of the princess. Many residents point to the island’s recent prosperity as a tourist destination—a trend highlighted by last year’s opening of the Four Seasons Resort Langkawi—as a sign that Mahsuri’s curse finally has been lifted.

Langkawi’s growing popularity with tourists also could be attributed to its natural beauty and beaches. The island is the cultural center and namesake of a Malaysian archipelago of 100 or so forested isles, where three species of monkeys, hundreds of exotic bird species, and nearly a third of the world’s flowering plant types thrive. The Four Seasons, a sprawling 48-acre property designed in the manner of a kampong, or Malay village, consists of a collection of pavilions and villas staggered throughout gardens, a rain forest, and a mile-long private beach on the island’s sparsely developed northern cape.

Reflecting Langkawi’s varied cultural influences, the Four Seasons incorporates design elements from Southeast Asia, India, and even Europe and North Africa. A labyrinth of Moorish arches, modeled after those of the Alhambra palace in Spain, leads from the resort’s entrance to a large courtyard with a reflecting pool. Intricate filigree, batik fabrics, and geometric patterns emblematic of Indo-Islamic art adorn indoor and outdoor spaces throughout the resort, as do organic details—cascading water, river stone pathways—associated with the principles of feng shui.

Set within tropical gardens and bordered by limestone cliffs, the spa at the Four Seasons is a haven unto itself. “It wouldn’t surprise me to find in the next year or so that people consider this a destination spa as opposed to a resort with a spa,” says Royal Rowe, the resort’s general manager. Guests receive treatments in one of six private glass-box pavilions, which feature separate dressing rooms with enclosed garden saunas and multihead rain showers. A staff yogi from Marrakech offers personalized yoga sessions designed to precede such treatments as a lemongrass and coconut body scrub, which in turn is followed by a traditional Malay massage and floral bath.

Guest rooms at the Four Seasons are, in a word, spacious. Even the 70 deluxe suites, the smallest of the resort’s accommodations, measure 732 square feet apiece and include outdoor bathing areas with garden showers and oversize terrazzo soaking tubs. The 20 freestanding beach villas, which measure 2,370 square feet each, have steeply pitched ceilings, outdoor living areas, reflecting ponds, plunge pools, spa rooms for two, and retractable glass walls that afford views of the Andaman Sea and nearby isles of Langkawi and Thailand. But the two-bedroom Royal Villa, a 15,078-square-foot home with an infinity pool and an art collection, exceeds all of the resort’s other accommodations, offering perhaps the ultimate proof that Langkawi’s royal curse has been reversed.