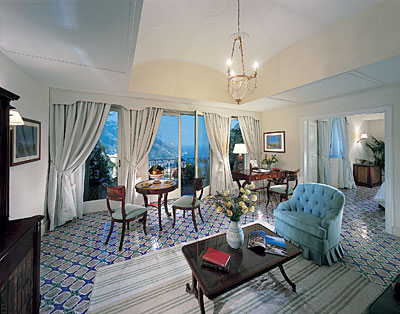 Midway through its renovation of the palazzo Caruso Belve­dere, Orient-Express Hotels hit a wall—a medieval edifice, to be precise. The discovery occurred on the cliff-top grounds of the Amalfi Coast pensióne, which the Caruso family sold to Orient-Express in 1999. The company already was taking a meticulous approach to the hotel’s refurbishment: Workers were lifting terra-cotta tiles from the floors, numbering them, and sending them to Rome for mending, and Renaissance art scholar Antonio Forcellino was re­stor­ing 18th-century frescoes—found beneath whitewash in the hotel’s laundry room—that depicted life in Pompeii. But after encountering the 11th-century structure and, eventually, artifacts while digging on the hillside to build a swimming pool, Orient-Express had to become downright obsessive in its efforts.

Progress slowed as the Sop­rin­tendenza Archeologica per le Province di Salerno (Archaeological Department of Salerno) supervised minute details of the Caruso’s restoration. Ultimately, the oversight committee allowed the historic structures and artifacts to become part of the Orient-Express property, which finally opened in June 2005—six years after the $30 million project began—as the Caruso Ravello. The hotel, Orient-Express’ fourth in Italy, incorporates remains of the 11th-century palace (built by a Roman patrician family), a colonnade that dates to the 17th century, and buildings and artworks from the 1700s.

The Caruso Ravello’s 50 guest rooms and suites, most of which have terraces with stunning views of the Gulf of Salerno, cling to a hillside nearly 1,000 feet above the Mediterranean Sea. (Seven suites built within the property’s medieval walls are opening this year.) The accommodations’ vaulted ceilings, Gothic windows, and majolica floors mimic the style of the Caruso Belvedere, whose guests included royals and Nobel Prize winners during its century of operation as a hotel.

This sense of refinement pervades the Caruso Ravello, from the terraced lawns to the cliff-side infinity pool to the ocean-view Belvedere Restaurant. Beyond the boundaries of the hotel, cobblestoned streets twist alongside ancient churches in the town of Ravello, and, less than 20 miles away, the Caruso Ravello’s artwork comes to life in the excavated city of Pompeii.