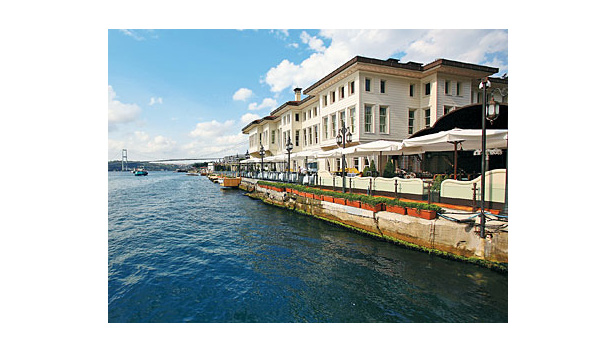 The 99-room Mandarin Oriental, Prague (+420.233.088.888, www.mandarinoriental.com) sits in the heart of the Czech city’s Malá Strana, or Little Quarter, on a slope that rises from the Vltava River to Prague Castle. Dating to the 13th century, the neighborhood is a maze of cobblestone lanes lined with restaurants, art galleries, and foreign embassies. The Mandarin Oriental, which occupies a 14th-century Dominican monastery, opened in September 2006 after a $67 million transformation by a team of architects, designers, and archaeologists. During the renovation, archaeologists uncovered the remains of a Gothic church, which is visible under the glass floor of the hotel’s spa. (The spa itself is located in the remains of a Renaissance-era church next door to the monastery building.) Rooms and suites at the hotel feature large limestone bathrooms and parquet floors, and the presidential suite’s roof terrace affords views of the Malá Strana, the river, and the castle. ($495–$5,350) – Mike Nolan

The frosted-glass windows and leather walls at the Ritz-Carlton Beijing, Financial Street (+86.10.6601.6666, www.ritzcarlton.com) may seem strikingly modern for a Ritz-Carlton hotel, but the concept behind this 253-room property is ancient. Designed according to the principles of feng shui (the Chinese art of placement), the glass-and-chrome skyscraper has a high-ceilinged lobby built to resemble a traditional Chinese courtyard, with trees and flowers that flourish in the natural sunlight. A ginger-lily essence is piped into the lobby, and floating clouds (considered good luck in Chinese culture) are embossed on the metal doors of the elevators. The feng shui setting—and features such as afternoon tea service with a selection of some 80 teas—helps guests unwind from the grind outside the hotel. (Its neighbors in Beijing’s newly constructed Financial District include UBS, JP Morgan, and Goldman Sachs.) Guests also can relax in the 15,000-square-foot fitness center and spa, which includes a lap pool, plunge pools, steam and sauna rooms, and 11 treatment rooms. ($540– $5,500) – Jessica Taylor

Though it opened in November, Paris’ Hôtel Fouquet’s Barrière (+33. 1.40.69.60.00, www.fouquets-barriere.com) traces its inception to 1906, when François André, founder of the casino and resort company Groupe Barrière, envisioned building a palace above his famed Fouquet’s brasserie on the Champs-Élysées. Members of his family who ultimately inherited the firm fulfilled André’s ambition a century later, following six years of development and a $500 million investment. Their new hotel presents a moderne alternative to Paris’ palaces (as the city’s Ritz, Hôtel de Crillon, and other premier properties are known). Architect Edouard François’ buildings combine traditional Haussmann-style exteriors with spacious au courant interiors designed by Jacques Garcia. The enclave of structures, which François designed from the ground up, sits at the corner of Avenue George V in the heart of the city’s Golden Triangle, wrapping around the original Fouquet’s restaurant. Before arriving at the hotel, you are asked to complete a Proustlike questionnaire that conveys your preferences: Still or sparkling? Roses or orchids? Sweet or savory? Classical or jazz? The 107-room property employs 350 staff members to attend to such predilections, and personal butlers handle everything from packing and unpacking to preparing herbal tea and a light snack for pre-dawn arrivals. Perhaps the best cure for the transatlantic flight, though, is a trip to the basement U Spa for a steam and a dip in one of the largest indoor swimming pools in Paris. ($925– $20,150) – Laurie Kahle

The owners of Hôtel Les Ottomans (+90.212.359.1500, www.lesottomans.com) claim to have spent more than $80 million transforming this 19th-century pasha’s summer home on the Bosporus into a 10-suite hotel. Given the Istanbul property’s limited number of rooms, its proprietors may never recoup that investment. However, the cost-is-no-object approach works to the great benefit of guests, who arrive at Les Ottomans after a short limo transfer from the airport and a speedboat ride down the Bosporus. The trip concludes at the hotel’s private dock on the European side of the river, in the ritzy Kurucesme district. Inside the hotel, textured velvet walls and elaborate ironwork contrast with touchscreen room controls and other high-tech conveniences. The merging of old and new takes an unexpected turn in the hallways, where reproduction Ottoman-era paintings are layered over with contemporary brushstrokes. ($1,075–$4,700) – Scott Goetz