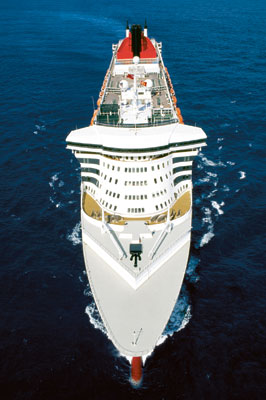 Cunard crowns a new queen of the sea.

Cunard built the Queen Mary 2—QM2 for short—to carry the tradition of the ocean liner into the 21st century. This was quite a feat considering that decades ago, the ocean liner, a commercial passenger ship that sails from one destination to another on a regular schedule, was rendered obsolete by the airplane. Cunard nevertheless committed more than $800 million to the creation of the largest-ever ocean liner, one that stands more than 236 feet tall and spans a length of 1,132 feet. Indeed, the QM2’s keel-to-funnel height exceeds the length of Cunard’s first ship, the 230-foot Britannia.

Commissioning the QM2 was a risk, but one that has succeeded largely because of the magnitude of Cunard’s investment in the ship. The new carrier of the transatlantic torch, which made its maiden voyage in January, is as fantastic as everyone expected it would be, and its charms will endure long beyond the waves of excitement stirred by the QM2’s splashy debut.

The vessel, which employs a crew of 1,253 to tend to its 2,620 passengers, fulfills its ocean liner obligations with several annual trips between Southampton, England, and New York, but it also offers many voyages that resemble cruise ship itineraries. This mixed mission is reflected throughout the QM2. Time-honored shipboard features, such as a full promenade deck and shuffleboard courts, coexist with a 20,000-square-foot Canyon Ranch spa and the world’s first seagoing planetarium. With five pools, 10 restaurants, a casino, theater, library, nightclub, and educational lectures, workshops, and classes, the QM2 leaves no room for boredom.

If John Maxtone-Graham, author of the ocean liner history book The Only Way to Cross, is correct, something inherent in sea travel fosters indolence. “Mid-ocean insouciance more often than not destroys disciplines carefully nurtured ashore,” he writes. Perhaps you will agree when you realize that the only luxury greater than having such a selection of activities is being able to ignore all of them. Instead, you can simply recline in the sun with a good book in one hand and a bottomless daiquiri in the other. Try doing that on an airplane.

Travelers looking for the elegance associated with the golden age of ocean liners—just not on such a titanic scale—will find it on board Radisson’s Seven Seas Voyager, a 670-foot ship launched in April 2003.

The vessel’s 700 guests stay in ocean-view suites with balconies and marble-appointed bathrooms. Voyager, which cruises throughout the world, has four restaurants—including Signatures, which is captained by Cordon Bleu–trained chefs—and on select cruises, gourmands can take the hands-on Cordon Bleu class. Radisson has also partnered with Carita of Paris to bring onboard its House of Beauty spa, which offers aromatherapy and body wraps. The company is the only cruise line that is a member of the Guild of English Butlers—the Voyager’s 447 crew members are well prepared to serve you.

A glass waterfall shimmers in the two-story atrium where guests are welcomed on board the Crystal Serenity. This 820-foot cruise ship will enchant its 1,080 passengers as it travels throughout the world. The ship, launched in July 2003 and manned by a crew of 635, includes four 1,345-square-foot Crystal Penthouses with verandas, ocean-view Jacuzzis, and butler service. The Crystal Dining Room dazzles with a new menu every night, or you can sample the fare in Asian and Italian specialty restaurants.

The entertainment includes repertory theater, classical recitals, and the only Caesars Palace on the high seas. Two pools, a fitness center, and a spa round out the vessel’s facilities.