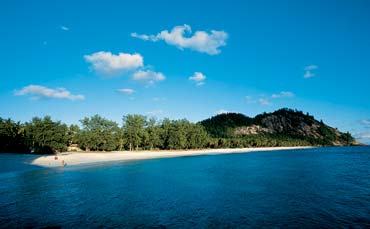 A natural state of mind in the Seychelles.

As your chopper descends onto North Island, it is hard to imagine that this sanctuary in the Seychelles was, until quite recently, abandoned and overrun with feral cats and rats. But it was not until 1998 that the property’s new owner, Johannesburg-based outfitter Wilderness Safaris, banished the pesky intruders and embarked on a restoration of this Indian Ocean island.

The feast for the senses continues in North Island’s 11 secluded villas—each a 5,000-square-foot enclave with its own pool, beach, and butler. Two mammoth bedrooms with cathedral ceilings include massive teak beds, walls that open for 180-degree views of the sea, and high-speed Internet connections. The bathroom is in fact a mini-spa with a sunken marble tub, outdoor shower, and massage table.

Seduced by the space and amenities, some privacy-seeking guests never leave their villas. But most visitors are inspired to dive the nearby reefs, walk the island trails, or take a jaunt to the gazebo on West Beach for sundowners and a catered dinner.

In tropical climes around the world, the phrase island paradise may have become just another travel cliché. But on North Island, it is an understatement.

A young couple strolls across a sandy cove at the Four Seasons Resort Costa Rica. In the nearby lobby, a foursome heads out for their tee time at the Arnold Palmer–designed golf course, while outside, a group of retirees boards a shuttle bus to Palo Verde national park. Toddlers and teens coexist peacefully at the pool downstairs as a mother rests in the comfort of a chaise longue, biding time before her green papaya lip peel at the oceanfront spa.

The Four Seasons’ main lodge and guest-room buildings—none of which is taller than the adjacent trees—blend into their tropical dry-forest surroundings with soft colors and sloping roofs (modeled after an armadillo’s shell). Food at the resort’s three restaurants is not so faithful to local traditions, but the extensive menu is a welcome sight in this remote location and, as with the resort overall, offers something for every member of the family.  —Bruce Wallin

In the southern portion of Napa Valley, where Caterpillars are more common than five-star caterers, there exists an extraordinary philosopher by the name of Keith Rogal. Although his father was in the luxury travel business on the East Coast, his own interests lay elsewhere, in architecture and history, twin passions that inspired him to study 18th-century English farmhouses. This singular appreciation for rural buildings—their functional design and relationship to their surroundings—would, through a series of professional twists and turns, uniquely prepare him to create the Carneros Inn, Napa Valley’s first new resort in more than two decades.

The gated compound, where it is not enclosed by fencing, is set off from the main road by rolling fields and vineyards that come up literally to the porches of the guest cottages, which can best be described as Steinbeck modern. Inside the planked and corrugated tin structures—each of which has a themed garden of its own—one discovers clean contemporary lines, thoughtful applications of natural materials, and amusingly postmodern touches, such as Le Corbusier and Philippe Starck furnishings. State-of-the-art water recycling and geothermal heating and cooling systems speak to the practical side of Rogal’s inspiration, as do the spa treatments, which utilize local materials (a grape seed body scrub, for example). At the Hilltop restaurant, Executive Chef Philip Wang transforms local ingredients into culinary artworks. “We have worked to ensure that our guests’ experiences are anchored in the place,” says Rogal. Even the black-and-white photographs that adorn the inn’s rooms and halls are true to this philosophy: They have been reproduced from the family photo albums of local farmers.  —Brett Anderson

The opening of the Wyndham Martineau Bay Resort & Spa on Vieques marks the ascendancy of the 21-mile-long island off the east coast of mainland Puerto Rico, and it signifies the hotel chain’s bid to play in the major leagues of luxury travel.

The new Wyndham, which opened in February 2003, is the island’s first full-service resort. The property offers not only a gorgeous swimming-cove setting with a soft-sand beach, but surprisingly sophisticated amenities. The treatment rooms in the spa have white-water views, and the luxurious oceanfront suites are decorated breezily in blues and whites, with terra-cotta floors, woven straw rugs, and oversize plantation-style furniture. Bathrooms feature double vanities, separate showers, and open-design oval soaking tubs. (The pottery is all hand-signed, even the toothbrush cups.) The end result is a first-class resort on an as-yet-unspoiled island. —Drew Limsky

Get into the Grove

Once home to the Earls of Clarendon, the Grove in Hertfordshire, England, has been transformed into one of Great Britain’s finest country retreats. The resort is set on 300 lush acres, and though the thrills of London lie just 25 miles away, you will likely never feel compelled to leave the premises.

The rich history of the Grove’s 18th-century brick building resonates from its exterior, while the interiors, complete with plasma screens and sunken baths, are anything but ancient (save for antiques such as the Louis XVI sideboard in the lounge). The oft-attempted mixture of new and old is successful here, providing the conveniences of a first-rate resort with all of the charms one would expect from an English country estate.

The staff at the Grove organizes everything from tee times on its world-class golf course to dinner reservations at Colette’s, the resort’s modern-British restaurant. But for the ultimate service, try a chakra balancing treatment in a candlelit room at the Sequoia spa.  —Samantha Brooks

It moves. It swirls. And there is no chintz or brocade. In an audacious departure from the traditional Ritz-Carlton template, the new Ritz-Carlton, South Beach, a $200 million restoration of architect Morris Lapidus’ DiLido Hotel in the historic Art Deco district, blends the supple, futuristic Art Moderne style of the 1950s with state-of-the-art refinements.

Highlights at the hotel, which opened in December 2003, include nautical-accented rooms with ocean views, a 16,000-square-foot spa, and meals served by the infinity pool or at South Beach’s only oceanfront restaurant. Rooms on the exclusive Club Level have a separate concierge and a salon with five daily food presentations.

The hotel lounge bears Lapidus’ name, and it is likely that the Miami Beach legend would approve of the space—with its curved walls and glamorous patrons—and the resort at large. After all, this is a man who titled his autobiography Too Much Is Never Enough and who once said that when you build a hotel, “You’re selling a good time.” At the Ritz-Carlton, South Beach, a good time is guaranteed for all.  —Drew Limsky

Scheherazade spun tales of treasure caves, flying carpets, and genies in magic lanterns. Even so, she would have gaped upon entering the resort complex that overlooks the souks in the United Arab Emirates city of Dubai. Viewed from afar, the Grand Hyatt Dubai is all techno-modern in undulating steel and glass, but inside it is an Arabian never-never land, a tropical rain forest with waterfalls cascading into pools, and streams and bridges leading to intimate milieus. The four dhows suspended from the atrium’s ceiling heighten the sense of fantasy.

An international trade center for the last century, Dubai’s tastes are eclectic, and so are the resort’s 14 restaurants and bars, with cuisine from such disparate locations as Italy, Singapore, Japan, Lebanon, India, Vietnam, and Manhattan.

The Grand Hyatt is a popular venue for high-powered international business negotiations, but its 37 acres of landscaped grounds are no less amenable to recreation and relaxation. The Grand Spa includes squash and tennis courts and Zen-inspired treatment rooms. You can swim indoors in a sleek, infinity-style pool with an underwater sound system or outdoors amid a tropical garden. For golfers, the Dubai Creek course is just five minutes from the hotel.  —Jack Smith

At many resorts, decompression often lags—like lost luggage—far behind your arrival. But at the Carlisle Bay Antigua, location, design, and culture conspire to reset all clocks to what the locals refer to as “Antigua time.” Owner Gordon Campbell Gray has instilled Carlisle Bay with what he calls a “sensibility of calmness,” designing each of the sleek, contemporary suites with a generous sitting area and a private terrace or balcony that includes a double-size daybed. The beds are ideal for the requisite afternoon nap or the more taxing chore of gazing at the Caribbean and the rain-forested headlands that shelter the bay. From your suite, it is just a short stroll—at a leisurely pace, of course—across the lawn to the palm-studded beach, where the staff serves cocktails and the trade winds dispatch the tropical heat.

Back at the hotel, the chic East restaurant offers Asian fusion fare, and at the open-air Indigo on the Beach, the sounds of the waves breaking on the beach enable diners’ conversations to remain intimate even when the restaurant is at capacity. At lunch, choose one of the tables near the garden and you will notice a soft and steady buzzing noise from the hummingbirds frantically feeding on the flowers. Apparently, they have not adjusted to Antigua time.  —Mike Nolan