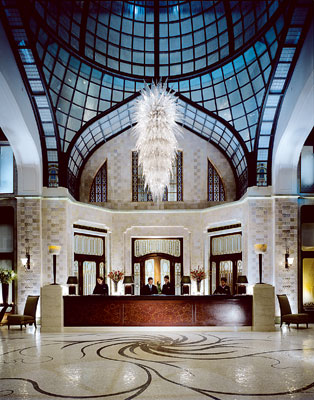 Few hotels offer a more magnificent prospect than that of Gresham Palace, Four Seasons’ newly restored Art Nouveau landmark on the banks of the Danube in Budapest, Hungary. Below each of the seven suites, and within view of several of the 172 rooms, brightly lit pleasure craft and party boats cruise the river. The grand sweep of the Chain Bridge leads your eye up toward the Buda Hills, where the Royal Palace, the spires of a 13th-century church, and the towers of a medieval village anchor a panorama that is best enjoyed in the evening with a Pálinka or Tokaji in hand.

Opened at the height of the Belle Epoque period in 1906, adjacent to the square that hosted Emperor Franz Josef’s coronation in 1867, the six-story Four Seasons building served originally as the central European headquarters of London’s Gresham insurance company. For decades after its debut, the Gresham was the most prestigious address in the city, housing not just insurance offices but luxury apartments and a shopping arcade beneath the lobby’s stained glass roof. The building’s riverfront café was the meeting place of the influential Gresham Circle artists’ group (whose roster included painters Jozsef Egry and Bela Czobel), but in 1944, the Gresham nearly became a victim of its location on the Danube. During the siege of Budapest, the Germans, in a futile attempt to slow the advance of the Russian army, blew up the Chain Bridge, mere steps from the Gresham’s lobby. The blast scarred the building’s facade and tore the arcade’s wrought iron, peacock-adorned gates from their hinges.

Subsequent years, while Hungary was under Communist rule, were no kinder to the Gresham, as its palatial apartments were divided into compact units, and state-run entities occupied the offices. When a chandelier was damaged, a lightbulb would take its place. Broken stained glass windows and mosaics were left in disrepair. Finally, in 1998, Hungarian investment firm Gresco purchased the Gresham and enlisted Four Seasons to oversee a $110 million conversion of the building into a hotel. Sculptors and mosaicists repaired the stone facade, and guests of the hotel, which opened last summer, now enter the lobby by passing through the rebuilt peacock gates.

The Gresham’s decor fuses Art Deco style with original Art Nouveau  furnishings, and dramatic architectural elements—a soaring indoor winter garden, regal staircases that link the sitting area and bedroom in tower suites—abound throughout the public spaces and guest rooms. In the lounge, purple velvet couches provide a fine setting for a drink before dining on Mediterranean cuisine at Páva (the Hungarian word for peacock). The restaurant serves more than 20 wines by the glass, including local Tokaji selections, and it offers several of the country’s barrel-aged Pálinka brandies for postprandial enjoyment. Of course, each of the Hungarian elixirs seems to gain a measure of substance when sipped from the balcony of your suite.

Jewel in the Rough

From the supermodels pacing its catwalks to the shoppers strolling its Via Montenapoleone, Milan marches to the beat of the fashion world. Not surprisingly, Italian jeweler Bulgari chose the city as the site for its first Bulgari Hotel, which opened last spring in the Brera district just steps away from Milan’s shopping meccas. The high-style property, however, encompasses more than the expected fashionista scene.

Set within a private garden next to the city’s Botanical Gardens, the Bulgari is a tranquil retreat that seems more like a resort than a downtown hotel. Architects Antonio Citterio and Partners designed the contemporary space in a bold, streamlined style that combines seemingly contrasting materials and surfaces—much like a piece of Bulgari jewelry may do. Black Zimbabwe marble and sleek, neutral furnishings define the public areas, while the Espa-branded spa features neutral Vicenza stone and Turkish Aphyon. The hotel’s 58 rooms and suites, most of which offer views of the surrounding gardens, are appointed with solid teak, durmast, and oak furnishings designed by Citterio. But the power of the design—and the hotel’s isolation from the city outside—is perhaps best represented by the solid, vaultlike click of the hefty, double-wide door to your suite.

In 1902, European food company Bunge & Born imported thousands of British red bricks, along with piece-by-piece architectural plans, to build a Belle Epoque–style grain silo in Buenos Aires’ Puerto Madero neighborhood. By the end of the 20th century, the building and its surroundings had fallen into a state of disrepair (a condition exacerbated by Argentina’s economic collapse). But last year, local fashion designer Alan Faena and Philippe Starck, the French enfant terrible of design, transformed the seven-story landmark into the otherworldly Faena Hotel+Universe.

The self-contained environment of the Faena complex encompasses 105 guest rooms and suites, 80 private residences, swanky bars, restaurants, art galleries, performance spaces, clothing boutiques, and more. The experience begins as you pass through the 33-foot-tall entrance into La Catedral, a seemingly endless corridor of engraved glass and gold velvet curtains. From there, you can relax by the fireplace with a glass of Malbec in El Living (Argentinespeak for living room), enjoy a tango show in El Cabaret, or take a cooking class in El Academy. Starck’s modern yet lavish touch is evident throughout the hotel, from the 18-carat gold leaf chairs in El Mercado restaurant to the guest rooms’ glass-enclosed bathrooms with marble floors.

For those guests inclined to venture beyond the Universe’s world, the hotel’s “experience manager” will help arrange such diversions as a trip to the adjacent nature reserve, a polo game at Palermo Stadium, or a winemaking session to create your own Argentine blend.