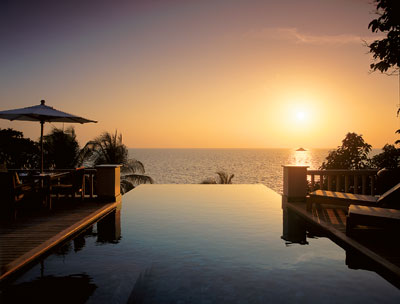 Trisara opened on the island of Phuket just two months before the catastrophic tsunami ripped through Southeast Asia last December. Although news coverage of the Thai island depicted total devastation, many of Phuket’s homes and resorts survived relatively unscathed. Trisara, which is perched atop steep jungle cliffs overlooking a bay protected by coral reef, incurred only minor damage to its beach-level pool. Within a day, the all-villa resort had fixed the problem and resumed its quest to become one of the finest destinations in Asia.

The name Trisara refers to the tropical garden where the Buddha is said to have reached the third stage on the path to enlightenment. The resort re-creates this mystical forest with an impressive system of waterfalls (designed by landscape architect Bill Bensley) that cascade toward the ocean through 40 acres of exotic flora. Paths, stairs, and bridges link the grounds’ multileveled common areas and Trisara’s 33 villas.

Villa resorts have become a standard in luxury travel, but rarely do they blend the distinct benefits of hotel and private residence stays the way that Trisara does. Furnished in contemporary Thai style, each of the resort’s 2,000-square-foot villas consists of an enormous bedroom, bathroom, and two dressing rooms, and includes such amenities as a 37-inch plasma TV, an iPod music system, a courtyard rain shower, and a 10-meter infinity pool. Vantage points throughout the villas’ indoor and outdoor spaces afford smashing views of the Andaman Sea.

Service at Trisara is no less captivating. With a staff-to-guest ratio of seven-to-one, the resort provides an elevated level of genuine Thai hospitality. Room service staff, for example, utilizes cooking facilities outside of the villas’ doors to ensure that honeycomb pancakes or spicy seafood soups arrive hot and fresh.

At Trisara Spa, which opened shortly after the tsunami, therapists administer a diverse range of water treatments, yoga and meditation services, and dual-masseuse massages. The elegant new addition to the resort offers further proof that Trisara, in spite of December’s disaster, has fulfilled its quest.  —scott goetz

The matron of the house, dressed in a pink silk gown and flanked by her children, gazes across her parlor, through the French doors of the entry hall, and into the lounge, where her husband leans against a fireplace, his model sailboats at his side. Hanging from the walls of the Sanctuary at Kiawah Island, said family consists of a collection of portraits, purportedly from this seaside resort’s rich and varied past. The oil-painted canvases, however, are the only form in which the subjects have ever existed.

Located on a 10,000-acre island south of Charleston, S.C., the Sanctuary is an entirely new development, but its owners have fashioned the resort to resemble an antebellum mansion that, over the years, has been redecorated, expanded, and, eventually, converted into a hotel. Brick, slate, wrought iron, and distressed wood appear as though they have been maintained meticulously for centuries, as do the wide-plank walnut floors, which were placed on sleepers in such a way that they creak underfoot. To ensure that art and furnishings matched the motif, the Sanctuary’s owners acquired antiques and commissioned works such as the parlor’s Mistress of the House, an imaginary former owner’s portrait that has been glazed to approximate aging.

Although vintage in appearance, the Sanctuary caters to contemporary tastes. The resort shares Kiawah with seven golf courses that weave through the island’s wildlife-rich marshland and along its shores. Kiawah also is home to the country’s top tennis facility (according to Tennis magazine) and to a private development of bona fide southern mansions (see Private Resort Communities, page 250). The Sanctuary—the island’s only hotel—features a spa, two restaurants, three beachside swimming pools, and wireless and cable Internet access from each of its 255 guest rooms and suites.  —Bruce Wallin

The Four Seasons Resort Provence at Terre Blanche is in an area known more for its olive groves than tourist traffic, and the new resort—Four Seasons’ first in Europe—embraces its bucolic setting in style. Designed by German architect Wolfgang Neumayer to blend into the landscape—much as the medieval mountain villages that it overlooks do—the resort sprawls across 655 acres of French countryside. The main lodge contains a Mediterranean restaurant and an elegant piano lounge, and serves as the point of access to the resort’s lake-size pool. From the lobby, winding stone pathways lined with lavender and thyme lead to 115 suites housed in two-story, ocher-colored villas with terra-cotta roofs and wrought iron–trimmed terraces. Two 18-hole courses and a David Leadbetter golf academy are highlights of the on-site sporting options, and the Côte d’Azur is just a short drive away. —Kim Fredericks

Shade Of Things To Come

Cancún is attempting to reinvent itself as a luxury destination, and if it succeeds, Aqua will be at least partially responsible. The most lavish property thus far on Mexico’s Yucatán Peninsula, Aqua is a triumph of modern, user-friendly design. Guest rooms painted in hues of the nearby sand and sea feature wall-to-wall marble flooring and flat-screen televisions, but Aqua’s true attractions await outside your suite. Just beyond the silent automatic glass doors on the ground floor is the whitewashed temazcal (Mayan steam bath) of the outdoor spa. Past Aqua’s courtyard and eight pools—each a different depth, temperature, and shade of blue—the resort’s Shore Club offers king-size beds for basking on the beach.

A visit to Bovey Castle, on the edge of Dartmoor National Park in Devon, England, is not unlike a trip to the set of a Merchant and Ivory film. After a BritRail ride to Exeter, you weave by car through twisting, hedgerow-bound roads across a misty moor and glades before the street ends at a formidable manor house rising eerily out of the fog.

Indeed, this seems to be the atmosphere that prompted Peter de Savary to acquire what had been a railroad hotel, strip it bare, and transform it into a classic country lodge. De Savary, the developer behind Scotland’s Skibo Castle and the Carnegie Abbey Club near Newport, R.I., renovated all of the public rooms and guest rooms in an understated Art Deco style that evokes the Roaring Twenties. Afternoon tea in front of a fire in the wood-paneled Cathedral Room—there is a minstrel’s gallery at the rear—seems the perfect setting for an Agatha Christie character to hatch a murder plot. Palm trees and mirrors adorn the main dining room, and the adjacent bar serves as a fine place to read the Financial Times while sampling from the collection of single malts.

De Savary extended his renovation to the estate’s 18-hole golf course, a J.F. Abercromby design that dates to 1926. Guests may also enjoy fly-fishing and skeet shooting on the property, or hiking and horseback riding through the boggy Dartmoor.

Auberge Resorts designed the 46 cedar lodges at Calistoga Ranch so that none would displace the flora, nor disturb the ambience, of the resort’s canyon setting in Napa Valley, Calif. An oak tree may grow in your bathroom’s garden; another may provide a canopy ceiling over what Auberge calls your “outdoor living room.” The area’s natural underground springs provide a font for Calistoga’s spa, and, to keep man-made noises to a minimum, the resort allows only employee-driven golf carts for transportation on the premises. Through such measures, Auberge, owner of nearby Auberge du Soleil, has created a sophisticated destination that seems secluded yet is within close proximity of the tasting rooms and other attractions of California’s wine country. And while visitors may venture to the many dining options in Napa Valley, Calistoga Ranch’s fine lakefront restaurant is reserved exclusively for guests. —Maryann Hammers