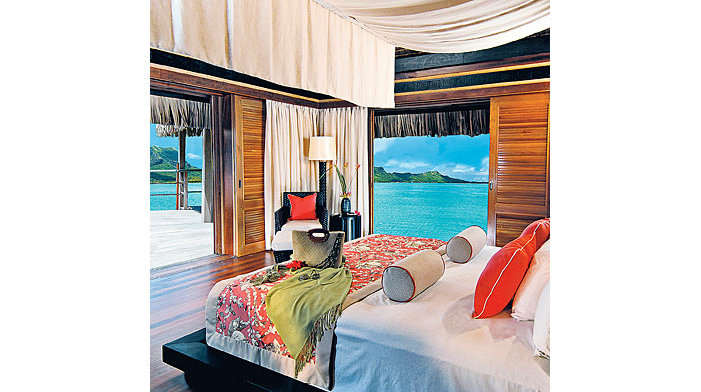 When the U.S. military closed its supply base on the South Pacific island of Bora Bora after World War II, many American personnel reportedly were hesitant to leave, and some had to be removed by force. “We are in one of the most beautiful places on the planet,” says Milton Sgarbi, general manager of the St. Regis Resort, Bora Bora (+689.60.78.88, www.stregis.com), offering a rather obvious explanation for why anyone would be reluctant to depart this basaltic island about 175 miles northwest of Tahiti. Last summer, after more than three years of construction, St. Regis opened its sprawling Bora Bora resort on a 44-acre motu (small isle) with views of the main island’s craggy Mount Otemanu. Personal butlers escort arriving guests on tours of the property, which includes a 13,000-square-foot spa (located on its own motu) and Lagoon, an overwater restaurant that presents Jean-Georges Vongerichten’s slant on French Polynesian cuisine. The St. Regis’ nearly 100 overwater and beach guest villas range from one-bedroom bungalows to the 13,000-square-foot Royal Estate. Five of the bungalows have private swimming pools—firsts for overwater accommodations in the South Seas—suspended above the lagoon. The villas may explain why, while the majority of Bora Bora visitors spend only a few nights in the area, guests of the St. Regis typically stay for about a week. Albeit begrudgingly, St. Regis visitors do leave of their own accord. ($1,095–$16,770)  —Laurie Kahle

A glass funicular at the Bulgari Resort, Bali (800.285.4274, www.bulgari.com) descends 500 feet from the cliff-top property to a mile-long beach. At the bottom, thunderous waves pound a coral reef, and bright green algae–covered outcrops form pools at low tide. The rugged and remote site, near the village of Pecatu and the sacred Uluwatu temple on the southern coast of Bali’s Bukit Peninsula, provided Bulgari with a dramatic stage for its second resort, which stands like a stone fortress overlooking the beach. Working with Milanese architecture and design firm Antonio Citterio and Partners, Bulgari employed native woods, lava stone, and coral stone in the construction of the resort’s 59 villas. The firms commissioned local artisans to produce the resort’s decorative accents, including the giant birdcagelike chandeliers in the Sangkar (“cage” in Indonesian) restaurant. Appropriately, the property’s two restaurants serve Indonesian and Italian fare. Both are located at the Village, a lively central complex linked by reflecting pools and set against open vistas of the Indian Ocean. ($1,200– $6,500)  —Laurie Kahle

All 24 rooms at Jade Mountain (800. 223.1108, www.jademountainstlucia.com), a resort-within-a-resort that opened in December at the 600-acre Anse Chastanet on St. Lucia, have generously sized pools. The infinity-edged features—none of which is smaller than 400 square feet, and the largest of which is 900 square feet—not only put thimble-size plunge pools to shame, but they offer a unique perspective of the Caribbean island’s famous pair of landmarks, the Piton Mountains. From the pools—or even from inside the rooms—neither a wall nor a sheet of glass interferes with the vista, which also is unmarred by the technological distractions of televisions, radios, and telephones. (The rooms lack such features.) Likewise, the experience at Jade Mountain is unencumbered by crowds. Guests can avail themselves of Anse Chastanet’s restaurants, spa, and beaches, but the arrangement is not reciprocal. Nick Troubetzkoy, owner of both properties, trained as an architect before purchasing Anse Chastanet in 1974, and Jade Mountain represents the realization of a long-standing ambition to create a resort of his own design. His desire to showcase the St. Lucia landscape yielded dramatic features such as the missing fourth wall in each room, as well as the Celestial Terrace, Jade Mountain’s top floor, which is open to the stars. ($950–$1,600) —Sheila Gibson Stoodley

Descending from the arrival platform to the villas at the Four Seasons Resort Koh Samui, Thailand (+66. 77.243.000, www.fourseasons.com) is not for the faint of heart. Set high on a cliff on the island of Samui, the resort’s entry affords views of the Gulf of Thailand and, directly below, a collection of villas and swimming pools built into the steep hillside. The narrow concrete roads that connect the platform to the villas—and to the resort’s restaurants, spa, fitness center, and library—are navigated by young bellhops in electric golf carts. After a pulse-quickening ride down the paths, guests disappear into one of the 63 villas, each of which features his-and-her dressing areas, a Jacuzzi tub, and a pool and hardwood deck. A sunny afternoon at the property’s private beach, where butlers serve impromptu piña coladas, is worth another wild ride. So are the green and red curries and sunset views at Lan Tania (Blue Palm), a restaurant up the hill. ($410–$3,800)  —Jennifer Hall

A row of high-rises in Sunny Isles, Fla., is an odd place for an upscale resort. But in the year since it opened, the 51-story Acqualina (305.918.8000, www.acqualinaresort.com) has brought true luxury to this stretch of sandy beach, which sits just north of Bal Harbour and south of Aventura. South Florida designer Zeke Fernandez decorated Acqualina’s 97 rooms and suites (the property also includes 188 condominiums) with interior details rarely found in hotel rooms: fine millwork, textured drapes and fabrics, and bookshelves filled with novels and jars of seashells. All of the suites have separate sitting areas and private terraces with ocean views. Acqualina’s three pools (including its adults-only “tranquillity pool”) likewise front the Atlantic, as does its two-story spa, which was the first Espa-branded facility to open in the United States. The resort also features the first offshoot of Manhattan’s Il Mulino restaurant, adding an element of big-city sophistication to Sunny Isles. ($425–$2,150)  —Adele Cygelman

After a three-year, $150 million renovation that concluded earlier this year, San Ysidro Ranch (805.565.1700, www.sanysidroranch.com) remains entrenched in both town and country, as a hike from the 114-year-old Montecito, Calif., resort attests. On a flat expanse a mile or so beyond a trailhead on the property, above several switchbacks in the Santa Ynez Mountains, a stone bench offers a place for resting and gaining perspective. Directly below is the Ranch (which Beanie Babies–founder-turned-hotelier Ty Warner purchased in 2000), bordered by the mountains to the east, the Pacific Ocean to the west, and the estates of Montecito and Santa Barbara to the north. Back on the resort’s grounds, however, it is apparent that the property has changed to embrace a more cosmopolitan lifestyle—or at least its comforts. Most of the 40 rebuilt guest cottages and suites feature living areas with LG plasma HDTVs and stone fireplaces, bathrooms with Kohler soaking tubs and radiant-heated floors, bedrooms with four-poster beds covered in French quilts and Pratesi linens, and outdoor patios with rain showers and hot tubs. The redone Kennedy Cottage—named for John and Jackie Kennedy, who honeymooned here in 1953—incorporates two master bedrooms, two bathrooms, and a deck with an ocean view. Pacific vistas also can be enjoyed from the property’s central garden, which supplies chives, oregano, and bok choy to the recently reopened Stonehouse restaurant. ($795–$3,990) —Lori Bryan