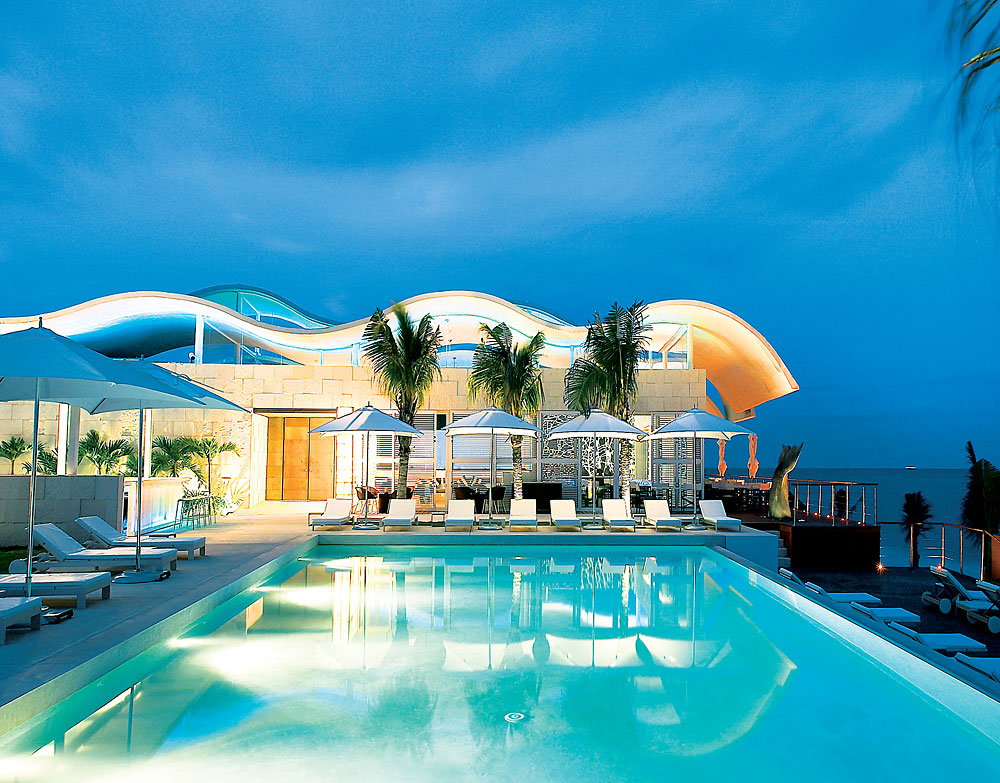 The Mandarin’s first significant delay came in October 2005, when Hurricane Wilma destroyed much of Cancún and other resort areas on the Yucatán peninsula. The storm nullified any progress that had been made at the Mandarin, although the project was already behind schedule—a fact that could not be blamed on the elements. “Our owner [Mexico City architect Gilberto Borja Suárez] is a visionary. He is terribly in love with design and concept, and he changed his mind quite a bit,” explains Patrick-Denis Finet, the hotel’s general manager. “The original plan compared to what we have now is totally different.”

What eventually materialized at this 36-acre site on the Riviera Maya is a resort with no peers in the Yucatán. Located 26 miles south of Cancún, the Mandarin occupies a one-mile-long, 150-yard-wide sliver of land that stretches from the region’s main highway to the Caribbean Sea. Reflecting pools line a thatch-roofed pavilion at the front of the property, where guests board golf carts for a ride through the jungle, past a cenote (a freshwater sinkhole), and along canals to their rooms.

Each of the Mandarin’s 128 guest rooms overlooks some form of water, either the cenote, a canal, a lagoon, or the Caribbean. Inside the accommodations, bamboo floors and dark wood furnishings reflect the Mandarin’s Asian roots, as does the resort’s service. The 440-member staff is remarkably efficient for such a new hotel—perhaps as a result of the extra time they had to prepare. “We had ambassadors from other Mandarin Oriental properties come for two to three months to train our staff,” says Finet. “Most people working in this area are used to all-inclusive resorts. But people here are warm naturally—they’re smiling all the time—so even though they don’t have experience at this level, you can train them.”

The most proficient staff members at the Mandarin are the butlers who attend to the resort’s suites, which include five casitas and a presidential villa located directly on the beach. Adjacent to the casitas is a beach club, where two pools, a seafood restaurant, and a ceviche bar all overlook the Caribbean and the resort’s private pier.

Because of the Mandarin’s lengthy layout, guests rely on their butlers or other attendants to shuttle them to the beach club and to the resort’s 25,000-?square-foot spa. The latter facility, situated near the entry pavilion, features a Watsu pool, a hammam, and a cenote-adjacent temazcal, or Mayan sweat lodge. Treatments include a series of Suite Experiences, which begin with a trip to the resort’s garden to select the ingredients for your Mayan herbal scrub. Lasting from two to five hours, the rituals ensure that you, like the Mandarin, will never be rushed. ($455–$15,000)