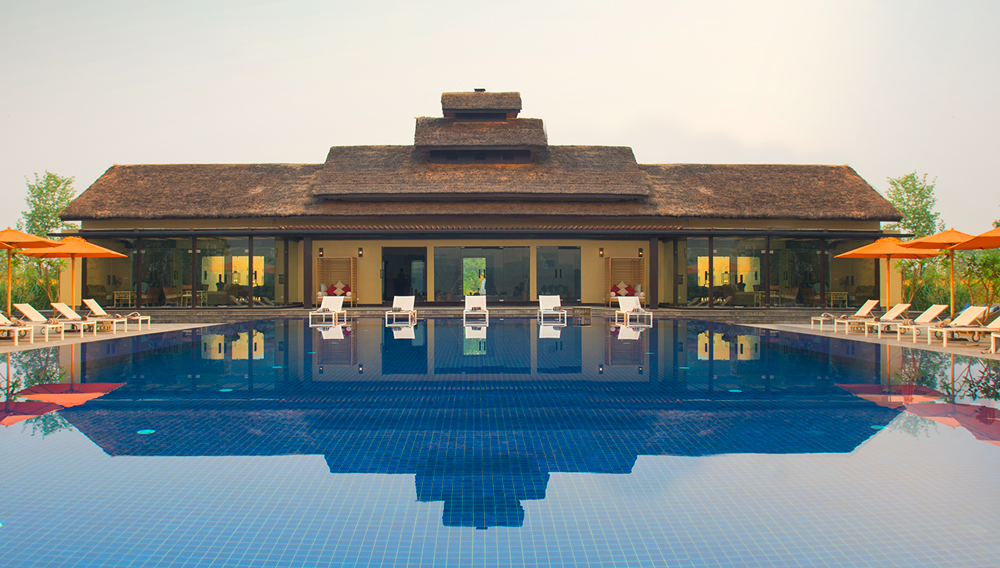 When Meghauli Serai made its debut on Nepal’s winding Rapti River last year, there were more than a few reasons to take note. First among them: the Bengal tigers. The 30-room Taj Safaris lodge—nestled deep within the country’s southern lowlands, just opposite the jungle-filled Chitwan National Park—is a rare base camp from which to spy the elusive and endangered cats, as well as greater one-horned rhinos (scientific name: Rhinoceros unicornis) and wild gharials (one of the largest crocodile species). Almost as thrilling, however, is what lies inside the new resort.

Spacious villas with private plunge pools, a Jiva spa offering ancient wellness therapies, and an artifact-filled main lodge serving gourmet Tharu cuisine are all never-before-seen indulgences in this part of the world. Of course, travelers don’t need such frills to have an unforgettable journey into Chitwan, but as complements to Meghauli Serai’s guided excursions—among them tiger vtreks, safari drives, and river baths on elephant-back—they provide an experience miles beyond memorable.

Taj wasn’t the only company elevating rare adventures with new luxuries last year. In April 2016, the extreme outfitter Eleven Experience brought high hospitality to the pristine mountains of Iceland’s rugged Troll Peninsula with its 13-room Deplar Farm. A home base for summit-to-sea heli-skiing in the winter and river and offshore fishing in the summer, the lodge offers après indulgences that include a 3,700-square-foot glass-walled spa, an indoor/outdoor heated pool with a swim-up bar, and a theater.

Meanwhile, halfway around the globe, Amanemu introduced travelers to Japan’s hard-to-reach Ise Shima National Park with guided treks on the ancient Kumano Kodo pilgrimage trail and hikes to the remote Kii Peninsula. All the requisite Aman comforts are in place for post-​adventure relaxation, from a 21,500-square-foot spa with a watsu pool to 28 suites and villas adorned with hot-springs-fed onsen baths.