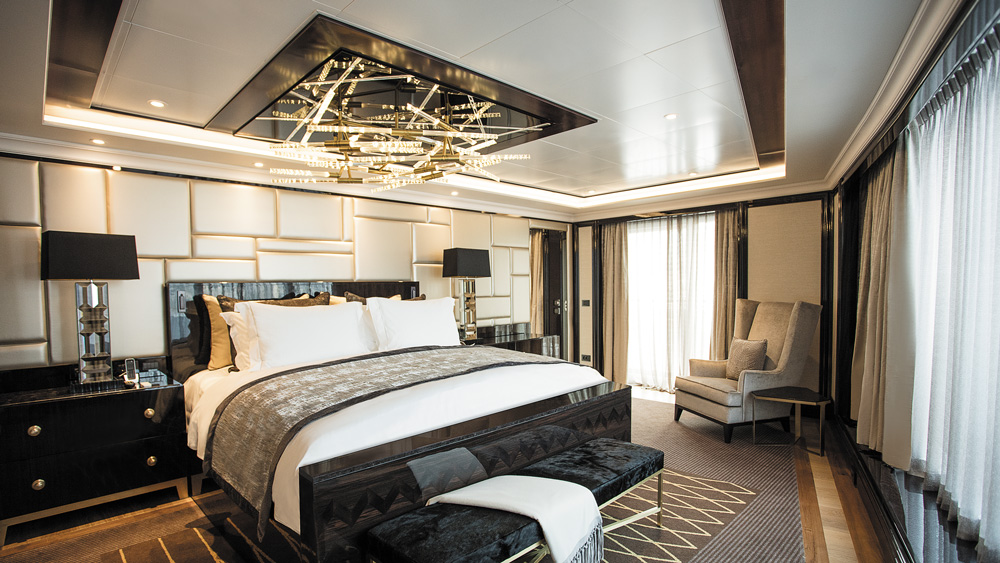 Regent Seven Seas Explorer
Claiming to be the the “most luxurious ship ever built” might seem a risky proposition. After all, if the “unsinkable” Titanic taught us anything, it’s that grandiose declarations can end in disaster. But Regent Seven Seas—the Miami-based cruise company known for its contemporary, upscale ocean liners—was unflappably confident when it unveiled the Seven Seas Explorer last July, making the sensational assertion without a hint of hubris.

It’s hard to deny Regent’s claim that the Seven Seas Explorer is the “most luxurious ship ever built.”  Photo: Stephen Beaudet

The 750-passenger all-suite ship quite nearly makes good on its billing, dazzling guests with every quantifiable trait of luxury imaginable. Hundreds of crystal chandeliers, tons of marble, miles of leather and velvet, and countless crates of Champagne were poured into this floating pleasure craft. There are Versace place settings on the tables, original Picassos on the walls, Bottega Veneta in the bathrooms, and Natura Bissé at the Canyon Ranch SpaClub. The palatial Regent Suite verges on excess with its private spa, Steinway grand piano, Savoir bed, and wraparound terrace that offers better views than the captain’s bridge does.

Of course, some cruise-ship requisites—the dark casino, the oft-crowded pool deck—chip away at the boat’s carefully curated image. But with a staff-to-guest ratio of nearly 1-to-1, and special culinary-focused shore excursions like Nordic cooking classes in Helsinki and chef-led market tours in Portofino, Seven Seas Explorer will tempt even the most cruise-phobic traveler. It may not be the most luxurious ship ever, but it is, without a doubt, worthy of this year’s Best of the Best title ($7,099–$70,000 for a 7-night journey).—Jackie Caradonio

Crystal Mozart
Long a trailblazer in luxury ocean cruising, Crystal Cruises redefined river cruising with last summer’s debut of ‘Crystal Mozart.’ The 154-passenger vessel does the Danube in style, with its clean-lined design and contemporary gray-and-nautical-blue palette. The first of seven river boats Crystal plans to roll out over the next 2 years, ‘Mozart’ also elevates on- and offshore experiences (no assigned seating, bad lounge acts, or crowded tourist-site visits here) with modern and meaningful itineraries that include Michelin-star meals, attentive butlers and sommeliers, and signature excursions like private concerts at Vienna’s Belvedere Palace and lively evenings at Bavaria’s Hacklberg Brewery. For downtime, the intimate spa, swanky observation lounge, and sprawling top-level vista deck all ensure a new perspective on river cruising ($3,535–$5,735).—Sarah Staples

Seabourn Encore
Seabourn raised the high-water mark for low-volume ocean cruises with the debut of its stylish ‘Encore.’ Launched in January, the 300-suite ship is more modern yacht than mega-cruiser, with sleek interiors that forgo expensive art and extravagant crystal in favor of clean lines and contemporary furnishings. Of course, most yachts don’t come with two swimming pools, a Thomas Keller restaurant, seven lounges, and a spa.

Yachts do, however, share at least one additional trait with ‘Encore’—the ability to travel to rarely visited ports that larger vessels cannot access. Among our favorite stops for the lithe vessel this year: Malta’s fishing village of Xlendi and Indonesia’s Komodo Island ($4,500–$14,000).—Sue Bryan

Belmond Grand Hibernian
Sleeper trains can be a bit, well, sleepy—cruise ships without the pool decks and ocean breezes, one might say. But the Belmond Grand Hibernian, a luxury locomotive that debuted last August, is anything but boring. The train comprises 20 elegant cabins and three social cars that serve as a base for best-of-the-Emerald-Isle itineraries. Guides whisk travelers from train stations to insider tours where they can kiss the Blarney Stone (then take tea in the art-filled Blarney Castle) or tee off at Lahinch. Tweed-vested servers greet each returnee with trays of the cocktail du jour—hot toddies with Irish whiskey one day, punch Romaines the next. Dinners of Beara Peninsula scallops, Connemara lamb, and other regional provisions showcase Ireland’s gastronomic bounty, and nightly entertainment showcases the boisterous craic for which the country is known ($3,090–$9,510).—Elaine Glusac