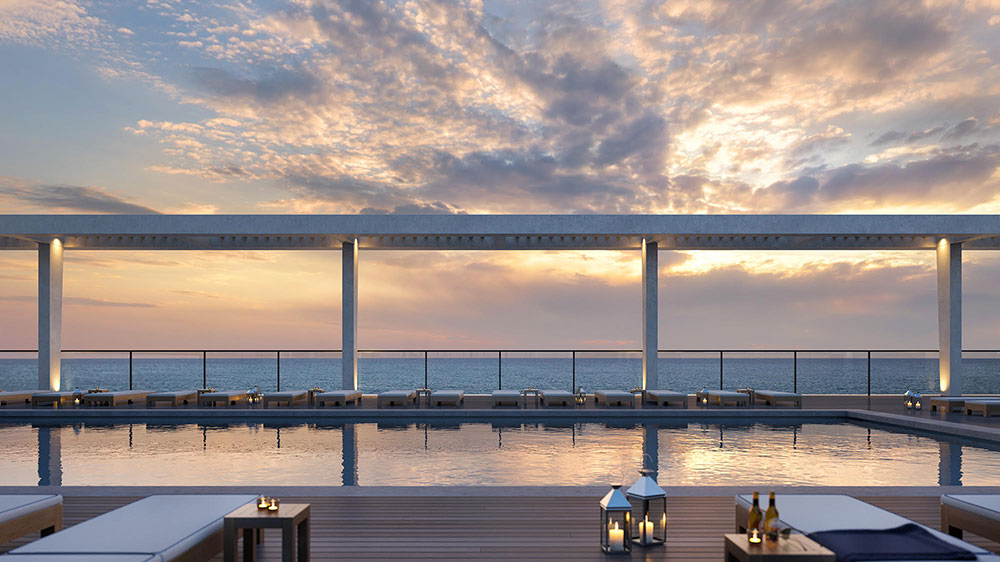 Summer will soon be here, and for many, it’s the most wonderful time of year if only because it’s nearly synonymous with taking a well-earned vacation, whether it’s with the kids in tow or a romantic jaunt for two. If you’re itching for a European holiday, you’ll want to skip the notoriously crowded tourist spots—you know them: Paris, Venice, Amsterdam, Barcelona—and luckily, we have a couple of under-the-radar destinations where you can do just that. (Just don’t tell too many of your friends.) And you won’t see any Caribbean islands on this list because of hurricane season—those are best saved for winter—but there are still plenty of options for an idyllic beach getaway, whether you want to stay closer to home or fly all the way to one of Japan’s best-kept secrets.

But summer doesn’t have to be spent by an ocean. In fact, nature lovers may consider Africa, where one of nature’s greatest animal migrations takes place this time of year. And if it’s a quick getaway you’re looking for, we’ve got plenty of easy-to-reach destinations that are ideal for a short trip or even just a long weekend, from Los Angeles to Newport, Rhode Island.

From urban centers to far-flung islands to iconic warm-weather spots, here are 11 of the best places to travel this summer.

From July 26 to August 11, Peru is set to host the 18th annual Pan American Games, when professional athletes from 41 countries will compete in track-and-field events in and around Lima. After spending a few days in the capital cheering them on, hop a flight to Iquitos to board a four-day Delfin Cruise aboard the Delfin III through the Amazon rainforest. You’ll swim with pink river dolphins, take a nighttime safari walk through the jungle—and relax aboard the luxurious ship in-between.

There’s a hotel boom happening in La La Land. The best way to take advantage? Split your time between different neighborhoods. (Bonus: It helps cut down on the driving). Start with a stay in Downtown’s buzzy Arts District at the Firehouse Hotel, which launched in April with nine rooms each stylishly done up in a single color. Guests can borrow Tokyobikes to get around, stopping to shop at Dover Street Market and sample baked goods at Tartine Bakery’s Manufactory.

Then it’s off to West Hollywood, which is enjoying a luxury revival of its own, with new hotels like the 1 Hotel West Hollywood (which brings plenty of LA–approved health and wellness amenities to Sunset Boulevard), Hotel 850 (a residential-style retreat that’s hidden away for maximum privacy), and the recently renovated Sunset Tower Hotel (an icon with a brand-new lease on life). Better come hungry: WeHo is also fast becoming LA’s most dynamic restaurant scene with recent openings from David Chang (who chose the neighborhood for his first West Coast outpost of Momofuku), Michelin-starred sushi chef Akira Back, and Top Chef winner Jeff McInnis of Yardbird.

After a few days, the beach will surely be calling, so it’s off to Santa Monica where the new Kelly Wearstler–designed Proper Hotel will open in June. It’s home to Onda restaurant from Jessica Koslow (of Silver Lake’s Sqirl) and Gabriela Cámara (Mexico City’s Contramar), where you can fuel up on light Mexican dishes before hitting the boardwalk or strolling nearby Main Street.

This classic Jersey Shore beach town has recently emerged as a new-and-improved getaway, especially for East Coasters in need of some laidback fun in the sun. The transformation began a few years ago with the opening of the hip Asbury Hotel, and this summer, the 54-room Asbury Ocean Club Hotel will attract travelers looking for some luxury. Each of its 54 rooms comes with a large terrace (some with ocean views), and guests will have beach butlers to cater to their every need. What’s more, the property is a five-minute walk from the pizza spot Porta, arguably the best restaurant in town. It’s not quite the Hamptons, but it’s certainly giving the old summer favorite a run for its money among New Yorkers in search of something new.

It doesn’t get more quintessential New England than Newport, which hosts a variety of events all summer long. From July 8 through 13, teams from around the world will compete in the 12 Metre World Championship yacht race. Watch the action from the great lawn at the historic Castle Hill Inn. Music fans should mark their calendars for the Newport Folk Festival (July 26 through 28) with performances by Sheryl Crow, Jeff Tweedy and Kacey Musgraves), as well as the Newport Jazz Festival (August 2 through 4), which will feature Corinne Bailey Rae, Herbie Hancock and Common. For a stay steeped in history, book a room at The Vanderbilt, Auberge Resorts Collection, a Gilded Age mansion turned 33-room hotel.

Picture-perfect coastal towns, beautiful beaches, and amazing seafood are just a few reasons to visit this southern region in the heel of Italy’s boot. But the list goes on: A lack of crowds, the tastiest burrata (the soft, gooey cheese was born here), and the charming city of Lecce and its collection of Baroque buildings. As for where to stay, Masseria Torre Maizza opened in May in a 16th-century farmhouse complete with a rooftop bar and access to a private beach club—not to mention activities like sailing and horseback riding. Chef Guy Martin of Paris’s legendary Michelin-starred Le Grand Véfour has also opened a duo of new palazzos as exclusive residential-style hotels called Palazzo Maritati e Muci. Nearby,  Palazzo Bozzicorso has also opened in an 18th-century palazzo, with 10 uniquely designed rooms, a secret garden and a private restaurant.

Wherever you stay, consider visiting during this summer’s Locus Festival, which will feature concerts throughout the region by the likes of Lauryn Hill and jazz/hip-hop artist José James.

This year marks the 500th anniversary of the French Renaissance, which is said to have begun in 1519 with the death of Leonardo da Vinci. To celebrate, the Loire Valley is hosting a series of themed events, including two Renaissance balls where period costume is required (May 18 at Château du Rivau and July 25 at Château Royal d’Amboise). For the first time since the 1500s, da Vinci’s gold-and-silk tapestry Last Supper for Francois I will leave the Vatican for the Château du Clos Lucé, where it will be on display from June 6 through September 9. And just in time for summer, the Hotel Château du Grand-Lucé—a French baron’s 18th-century country home—will reopen after a painstaking renovation with 17 rooms, sumptuous interiors (think crystal chandeliers and bespoke Christian Lacroix fabric), and expansive gardens inspired by Versailles.

Okinawa—a group of 150-plus islands in the South China Sea that’s often compared to Hawaii for its gorgeous beaches and incredible diving—has long been a getaway for Chinese and South Koreans. But now the rest of the world is paying attention thanks to a number of new hotels. There’s the beachfront Iraph Sui, a Luxury Collection Hotel on Irabu Island, which fronts a coral reef and has 58 light-filled rooms with ocean views. And in late July, the Halekulani Okinawa—owned by the same team behind the beloved Honolulu property—opens on Okinawa Island. Each of the 360 rooms is done up in natural tones and overlooks the water, and there are five standalone villas with private pools and natural hot springs.

All eyes were on this city-state last year because of Crazy Rich Asians, but luxury travelers now have a better reason to take notice: After a two-year top-to-bottom renovation, the iconic Raffles Hotel (est. 1887) is finally reopening in August; expect three new categories of suites and restaurants by Alain Ducasse, Anne-Sophie Pic and Jereme Leung. The destination will also flex its gastronomic muscles in June, when The World’s 50 Best Restaurants gala takes place there. You can also taste award-winning modern French cuisine at Odette (inside the National Gallery Singapore), which ranked No. 28 on the revered World’s Best list last year.

When most people think of Los Cabos, the southern coast of Baja usually comes to mind. (And for good reason, what with the recent additions of world-class resorts like the Montage and Viceroy.) But as of this summer, a pocket along the calmer Sea of Cortez will become the latest go-to spot for a luxurious beach getaway when the Four Seasons Resort Los Cabos at Costa Palmas debuts. It will have a 141 oceanfront rooms, a 50,000-square-foot beach club and a Robert Trent Jones II–designed golf course—all connected to a yacht marina.

Beginning in July, more than two million wildebeest and zebra will travel from Tanzania to Kenya’s Maasai Mara, making for one of nature’s most spectacular sights. Guests of Angama Mara—a luxurious safari lodge with just 30 clifftop tents—will have a front-row view. Activities also include hot-air balloon rides, walking safaris, and tours of the on-site garden. Teresa Sullivan of Mango African Safaris also recommends Sanctuary Olonana from Sanctuary Retreats, which just debuted the Geoffrey Kent Suite, a splurge-worthy two-bedroom villa with a private infinity pool and personal chef. The lodge set along the Mara River—a perfect spot to catch the action when the migrating animals cross the water. And with Kenya Airways’ new direct flight from JFK to Nairobi, it’s now easier to get there.

The view over the Maasai Mara from Angama Mara  Photo: Courtesy of Angama Mara

Our nation’s capital knows how to celebrate summer, with countless events including the DC Jazz Festival (June 7 through 16), the Smithsonian Folklife Festival (June 29 and 30), and a Fourth of July fireworks display that lights up the National Mall. And starting in May, visitors can be among the first to experience the International Spy Museum, filled with espionage artifacts dating back decades. More of a space geek? July 20 marks the 50th anniversary of the Apollo 11 landing—the perfect excuse to learn more about it at the Smithsonian National Air and Space Museum. And after being shuttered for almost two years, the Washington Monument is back in action with a new elevator. Book a room at the Rosewood Washington, D.C., in Georgetown, which unveils its new look (and an outpost of Wolfgang Puck’s CUT restaurant) on June 17.