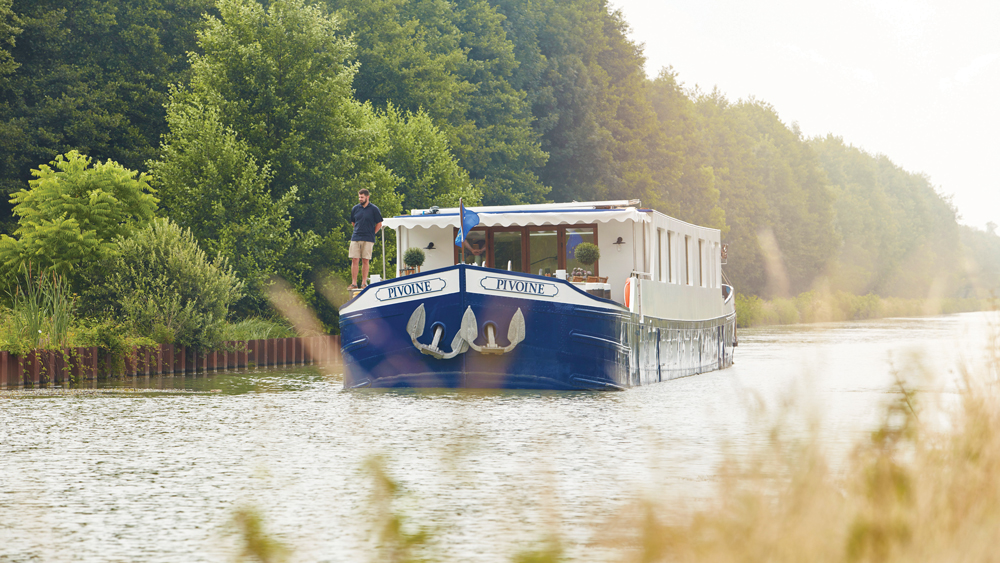 In our increasingly-fast paced world, there’s something that feels especially indulgent about slowing down. There’s luxury in knowing you don’t need to rush–that you’ve got no where else to be than where you currently are. It’s not hard to imagine, then, why trips that force us to shift a couple of gears down from our break-neck daily pace are becoming increasingly popular. Case in point? A leisurely barge cruise on a bucolic French waterway—maybe a mossy stone-edged canal in Burgundy or in the dappled shade of the tree-lined Canal du Midi in the Languedoc-Roussillon in the south–has become a bucket-list experience.

These cruises are now available on Belmond’s two newly-christened barges: the Belmond Pivoine in Champagne (pictured above) and the Belmond Lilas in Alcase. The four-cabin barges, which are available for full carter only, offer all of the comforts of a five-star hotel–think incredibly spacious cabins with large full-scale baths and dressing rooms and casual-chic interiors by London based interior-design firm Muza Lab. On the Pivoine, for example, the main lounge area is light, airy and rustic, with parquet floors, chintz-covered settees, and rattan armchairs that give it a stylish beach-house feel, while the three cabins downstairs come with oak built-ins, terra-cotta tile floors that evoke traditional French farmhouses, and oversized limestone-paneled showers  (the master suit includes a full-sized soaking tub, too).

Best of all, with an English-speaking crew of six, a cruise on the Pivoine from La-Ferté-Sous-Jouarre to Châlons-en-Champagne is all about you. Fancy a warm croissant and a cup of tea while you lounge in the heated plunge pool at the head of the bow catching peek-a-boo views of the Champagne vineyards through the curtain of greenery that lines the misty Marne river early in the morning? No problem. Or maybe a chilled flute of Champagne with canapés after a visit to the magnificent Vaux-le-Vicomte chateau on deck before dinner? Done. Everything is possible during one of these cruises, including cooked-to-order menus, special wine requests, and made-to-measure shore excursions.

While Belmond’s two new boats are the ultimate float in France, there are plenty of ways to slow down around the world. Read on to discover four more of our favorites.

When the 135-foot-long Gypsy parts the latte-colored water and maneuvers between boulders, the Mekong feels deceptively placid. Because much of Laos remains unmarred by roads, this forceful river is the best—if not the only—way to reach its hidden nooks. As the intimate ship, which was launched earlier this year by Mekong Kingdoms, completes its nearly 200-mile journey (two nights when sailing from Thailand, three nights when going upstream from Laos), thick forestry unfurls for hours without a sign of human settlements—or cell towers, for that matter. (Don’t fret, wi-fi works sporadically if you must post a few selfies, but we’re sure you’ll be thankful for a bit of forceful unplugging.) Aside from the pampering from the on-board chef, passengers of this two-cabin cruise meet traditional weavers, taste freshly distilled rice toddy, and explore a cave filled with centuries-old Buddha statues. And don’t worry about getting mobbed by postcard peddlers: Laos remains late to the tourism game, so you’ll have large stretches of the lush country to enjoy at exactly your pace.

The Gypsy on the Mekong  Photo: Courtesy of Mekong Kingdoms

Me to We & the Sacred Ganges

Though transversing India’s huge and varied countryside is often an exercise in slow travel, Uniworld’s new Me to We & the Sacred Ganges cruise takes the experience up a luxurious notch. The 12-day itinerary actually starts with a few days on land, as you’ll travel from New Delhi to Udaipur for three days spent immersing yourself in the local culture with social enterprise Me to We–think pitching in alongside farmers at a sustainable development project and getting to know the rhythms of local village life. After transferring to Kolkata, you’ll then board the Ganges Voyager II for eight leisurely days spent plying the iconic waterway. Opulent Indian–inspired staterooms will serve as your home base, and before heading out to explore the temples of Kalna or watch metalworking artisans at work in Matiari, you can start each day by practicing yoga alongside the ship’s resident yogi and fueling yourself with a wellness-minded meals.

River cruises aren’t the only way to take things slow, as the new Caspian Odyssey itinerary, operated by Golden Eagle Luxury Trains and available to book through Wilderness Travel, attests. The 16-day trip winds things back to the golden age of travel as you make your way east out of Armenia–hitting countries like Georgia, Azerbaijan, and Kazakhstan along the way–aboard an opulent passenger train. And though you’ll certainly be covering a lot of ground as you wind your way around Lake Sevan through the Caucus Mountains, there’s something intoxicatingly tranquil about watching the countryside slip by from the Golden Eagle‘s plush dining car or lounge areas in between stops, or letting the sound of the tracks lull you to sleep after long days out exploring.

And if barges and trains are still too fast for you, we’d suggest opting for a walking tour instead. Adventure outfitter Butterfield & Robinson offers plenty of ways to slow things down, as its locally-guided walking tours range from completely foot-powered treks through TK to more leisurely tours of the Cinque Terre. It’s Morocco Walking Tour strikes a nice balance between leisure and hard work, as days are divided between walks and hikes (typically topping out around the 5-mile mark) and nights are spent luxuriating in some of the country’s top hotels. The seven-day private itinerary starts in Marrakech, where you’ll get warmed up for the days ahead with a walk through the Medina and YSL’s lush gardens before checking in at La Mamounia. From there, you’ll head into the Atlas Mountains, using Kasbah Tamadot as your home base for following in the footsteps of the semi-nomadic Berbers that call the region home. After a drive deep into the heart of the country, you’ll close out the trip hiking through the surrounding desert and it’s lush oases.

Walking into a Moroccan village.  Photo: Courtesy of Butterfield & Robinson