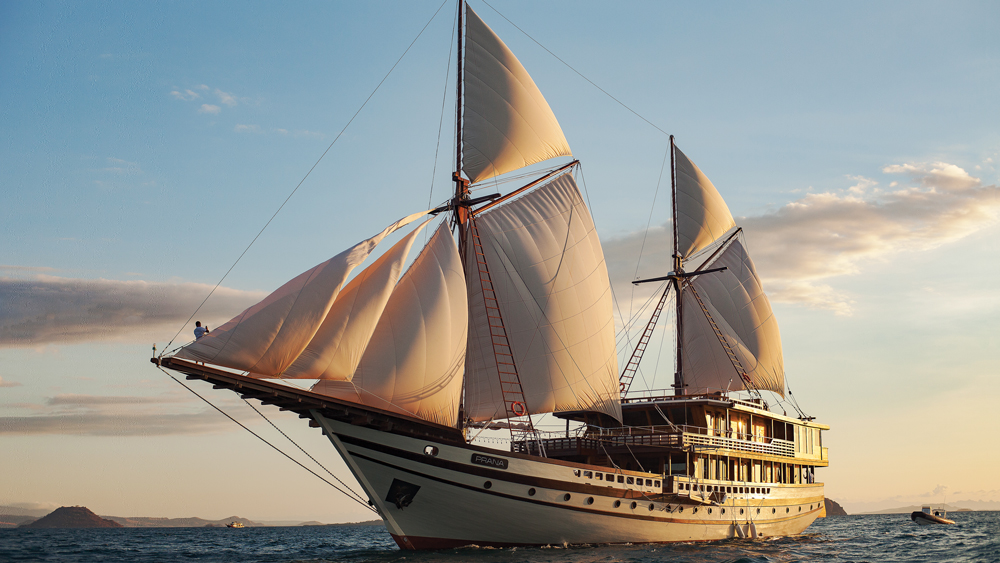 There’s more to Indonesia than eating, praying, and loving. Beyond well-trodden Bali, some 300 miles to the east, on the uninhabited island of Rinca, there are dragons— Komodo dragons—and there, it is the rare traveler who encounters with interest (and perhaps fear) the large carnivorous lizards sunbathing on pebbly beaches and swimming like mini alligators through the Flores Sea.

And there, too, is Prana by Atzaro, the 180-foot charter yacht that is now the most luxurious way to explore the mythical islands of Komodo National Park (other ships, like those operated by Silolona Sojourns head out into Indonesia’s Ring of Fire). Built by hand from local ironwood and teak, the phinisi appears a relic from the past, its massive sails and ancient architecture lending a look that’s more pirate ship than slick superyacht. It’s the result of chisels and adzes rather than modern machinery, and yet on board, it is extreme in another sense, with sprawling suites and a crew of 18 that includes dive masters and a spa director.

Phinisis have been the main mode of exploration in Indonesia for three centuries, and though the experience itself has improved with Prana, the rationale behind it remains the same: In this place of blood- thirsty lizards and other beasts, who would dare stay the night on land?

“It’s an interesting part of the world,” says Prana owner Victor Guasch in the understatement of the year. The CEO of Ibiza’s Atzaró Hotel Group hails from Spain, yet he has a long history in this region, having lived in the Philippines during his days as a Spanish diplomat. Today, he sees the islands of Komodo as an opportunity. “Indonesia has some incredible destinations, but it was missing a luxury ship; Prana can take you to very remote places where there is no place to stay.”

No doubt, this primordial otherworld is best left unsettled. It’s far better to sail to these Jurassic Park–like islands (a cliché, yes, but accurate no less), then return to the floating comforts of private chefs, daybed-lined sundecks, and yoga sessions. Take the island of Padar: An idyllic stretch of pink-and black-sand beaches by day, it becomes the territory of hostile scavenging hogs by night. On Pulau Koaba, it’s the Sunda flying fox, a large endemic bat that turns paradise into chaos come sundown, swirling by the thousands into the sky. (Prana’s crew makes a cocktail hour of the spectacle from the safety of the ship’s upper deck.) Then there is Rinca, a pristine island filled with formidable predators.

The mix of delight and danger might just make you blurt out, “I want to die here, it’s so beautiful.” Now that Prana’s plying these seas, however, the possibility of that actually happening isn’t quite so real.