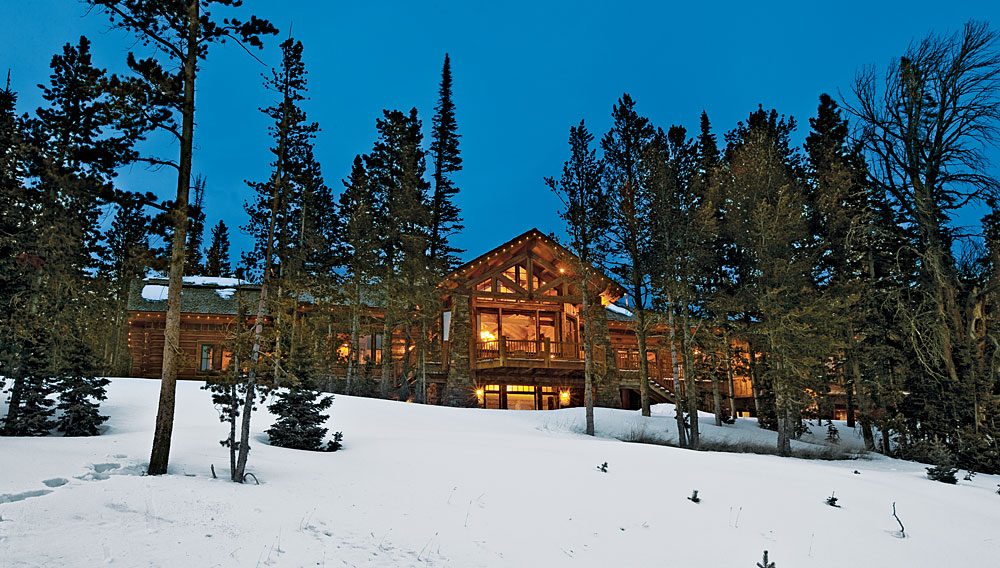 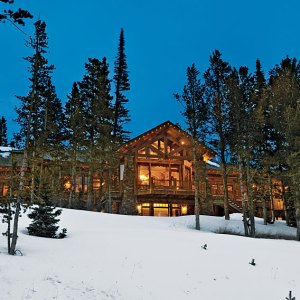 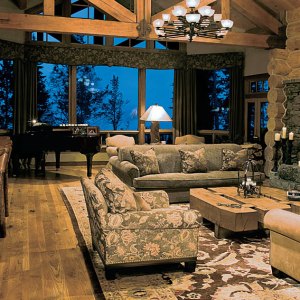 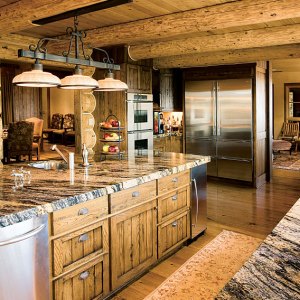 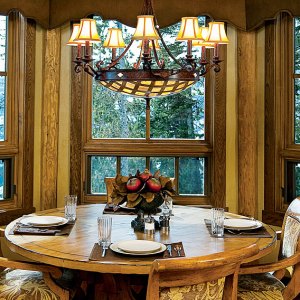 At Yellowstone Club—the roughly 13,600-acre private resort community in Big Sky, Mont., managed by the Discovery Land Company—the deer, elk, moose, and bears often outnumber the golfers and skiers with whom they share the grounds. “We always thought that the skiing at Deer Valley was great, because they limit the number of ticket sales to 5,000—unlike a place like Mammoth, where they let 40,000 people on the mountain,” says the businessman from Southern California who remodeled this sprawling home on one of the club’s most desirable sites. “However, Yellowstone Club has maybe 200 people skiing in a day, and if you meet someone at the bottom of the ski lift, there’s a good chance that you’ll end up being invited over to their home that evening for dinner. We were originally attracted to the community because of the amazing amenities, but we ultimately decided to live here because of the sense of community.”

The home has become a four-season retreat for the owners, whose three children, extended family, friends, and business colleagues go there to relax and rejoice in the club’s more than 2,200 acres of private skiing and 18-hole Tom Weiskopf–designed golf course. The 10,000-square-foot residence contains six bedrooms; expansive living and dining areas designed to accommodate both large-scale gatherings and small, informal get-togethers; and a game room and a spa area on the lower level that offer panoramic wilderness views.

Living Large | “When I first came out to visit the club, I came back to the office and told everyone that it was the ultimate lifestyle experience,” says the homeowner. “We spent the next three years searching for the perfect home and, after purchasing it, were in interior design meetings almost immediately.” The owner and his wife worked with Jerry Locati of Locati Architects and Interiors, based in Bozeman, Mont., to give the residence greater warmth and to improve its flow.

The log-and-timber-frame structure is situated on a ridge overlooking a valley, but the homeowners found its rooms dark and out of tune with the surroundings. They wanted to open up the interiors to the outdoors while avoiding the clichés associated with log construction. “The home has a cabin-in-the-woods feel, but the furniture is actually quite eclectic,” says Locati, who has designed more than 50 homes at Yellowstone Club. “A lot of it we designed ourselves, and it’s locally made.”

Visitors to the three-story home enter on the second level directly into the great room, a dramatic space with nearly 30-foot ceilings and views of the valley and golf course. The main entertaining areas include the kitchen, which has granite countertops, cabinets from Mountain High Woodworks, and a plan that enables large groups to gather there; a breakfast area that looks out on mountainous vistas; and the dining room, which is lit by an antler chandelier and furnished with an antique clock, a hutch made from recycled wood, and a custom French-antique-style dining table.

View Finder | Brightening the master suite was one of the homeowners’ priorities. Locati admitted more natural light in the bedroom by inserting a large window at the top of the log wall opposite the bed. He also installed a direct-vent gas fireplace that requires no chimney, to lend further warmth to the space without diminishing its openness. “By breaking up the logs, we lightened the room a lot and added furnishings that you might not normally expect in a typical log home,” says the designer. “For instance, the stone-surround fireplace isn’t exactly contemporary, but it’s more modern than what you might expect in a log home. Same with the bed, which has a wooden frame but is a bit more streamlined and lacks the Lincoln Log look a lot of timber furniture can end up having.”

Plaster walls and travertine countertops and floors give the master bath a French-country flavor. Like the other rooms on the main floor, the entire master suite offers the occupants views of the pristine wilderness and sparkling mountain ranges across the valley.

To Infinity and Beyond | The spa area was created from an unfinished space adjacent to the home’s utility rooms on the lower level. This inviting area was primarily the vision of the husband, who wanted to create a grottolike enclave that would open to the mountainside vistas in summer or in winter. “It’s an unbelievable feeling to be sitting in a 100-degree hot tub when there’s a blizzard outside,” he says. “You can see the snow coming in, but you’re completely protected from the elements. It’s unreal.”

The tub, which can accommodate dozens of people, has an infinity edge so that water appears to fall from the rim into the steep valley below. Rock walls featuring built-in waterfalls wrap around two sides of the tub, while a third wall consists of a glass panel that fully retracts, opening the space to the outdoors. “The owner wanted something that felt like it was outside but that had all of the comforts of being inside,” says Locati. The room also features radiant-heated floors and a mechanical system that regulates humidity, so that the tub can remain uncovered when not in use. A large steam room adjacent to the hot tub provides another form of relief for sore muscles after a long day on the slopes. The spa area’s flat-screen television and audio are controlled by the home’s wireless Crestron system, which was installed and programmed by local firm Studio AV.

Accommodating Quarters | With its bar, game room, and 1,000-bottle wine cellar, the lower-level entertainment area (above) provides the homeowners and their friends with a casual space where they can play pool on the Monarch Billiards table or a hand of poker at the professional-style card table. “This isn’t one of those dungeon-cum-rec rooms,” says Locati. “It’s on the lower level, but there is a full wall of windows that lets in a lot of natural light.” From the bar area, guests can watch sporting events on the flat-screen TV or simply gaze out at the view.

In addition to the master suite, the home’s accommodations include a one-bedroom guest apartment with a kitchen and sitting room on the third level; a guest bedroom and bath on the second level; and three large guest bedrooms with baths on the lower level, one of which is furnished with two queen-size wood-framed beds.

“We’re amazed that we’ve found a single spot that offers so much,” says the homeowner. “Not only are the private facilities at the club truly one-of-a-kind experiences, but we’ve been able to create a place that is special for me and my wife, our friends, and even our teenage children to all enjoy together.”

For video of this residence, go to tv.robbreport.com/ychome. Contact Dave Kisko (406.995.4900, dave.kisko@yellowstoneclub.com) for further details on this home or for information on Yellowstone Club properties.