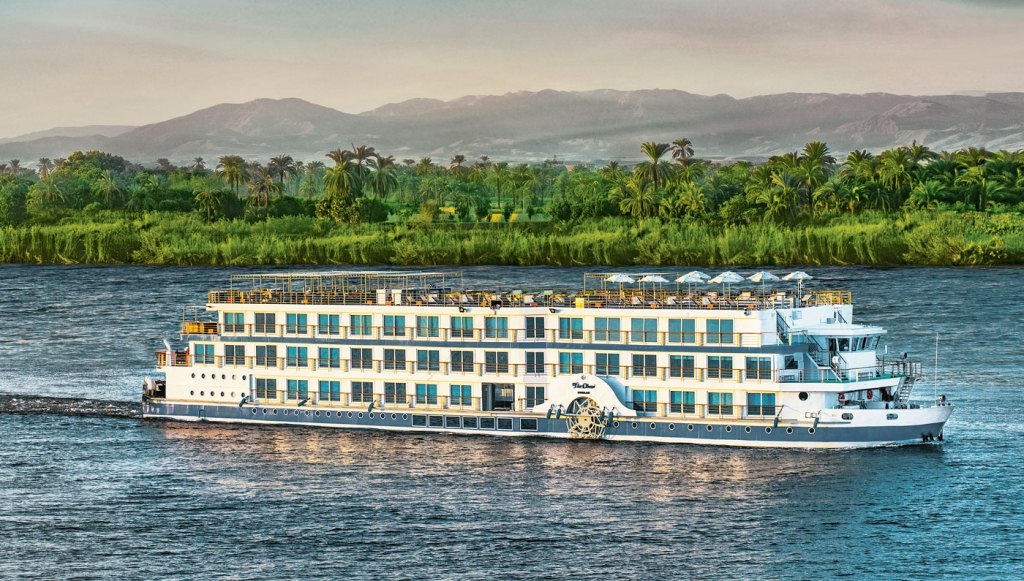 The philae was a stunner, each of its staterooms fit for a pharaoh
View Gallery — 3   Photos 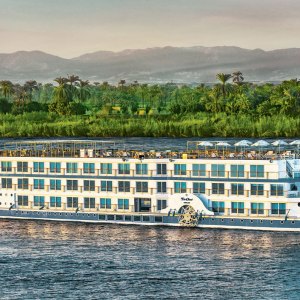 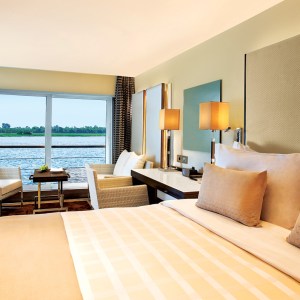 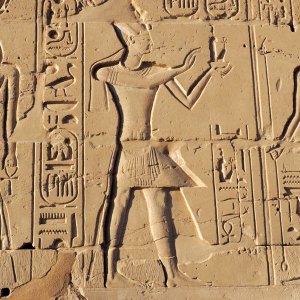 Amid the uncertainty in postrevolution Egypt, the elegant Philae has risen from the dead—and is hoping to bring the mighty river’s tourism industry with it.

In the beginning, the Philae was simply adequate. Like most riverboats plying the Nile River, it was big and boxy with four decks and a paddlewheel—a Middle Eastern version of a Mississippi cruiser. The rooms were cramped and the hallways dark, and though the lobby’s grand staircase added an Agatha Christie sort of charm, the decor was more timeworn than timeless.

By 2011, after 15 years of service, the Philae was clearly past its prime. Then along came India’s Oberoi Group, a luxury hotel chain that had been operating Nile cruises aboard the Oberoi Zahra since 2007. In the Philae, the company saw an opportunity to build a sibling ship that would be the finest Egypt had ever seen. And so, after striking a deal with the Philae’s Saudi owners, Oberoi sent the tired old cruiser north to Cairo for a magnificent $10 million transformation.

The timing of the Philae’s reinvention, however, was less than ideal. As workers began to toil away on Oberoi’s ship of dreams, political unrest was reaching a precarious climax in Egypt. The year had begun with the country’s Arab Spring, a series of civil uprisings and rebellions that soon culminated in the end of President Hosni Mubarak’s 29-year rule. A struggle for power ensued, and headlines of uncertainty at best and terrorism at worst kept travelers at bay. By 2014, a new government had been installed and stability largely restored—but tourism had fallen by more than 30 percent since 2010.

Still the Philae persevered, and in late 2015 it finally slipped back into the Nile’s murky water, gliding proudly past Egypt’s ancient monuments and temples. It was years later than Oberoi had planned—and by then only 40 of the river’s 280 prerevolution cruise boats remained in business—but the Philae was a stunner, each of its 22 staterooms fit for a pharaoh.

Now if only the tourists would come.

It’s a searing summer day in Luxor when I slip through the Philae’s spotless glass doors to meet resident manager Mahmoud Noureldin. Outside, the heat claws at everything like a relentless jackal; inside, the air-conditioning feels mercifully frigid, as if preserving the freshly polished marble floors and pristine ecru leather benches lining the lobby entrance. The grand staircase of the Philae’s old days is gone, replaced by a breezy, double-height atrium crowned by a crystal chandelier.

Noureldin greets me with a handshake and a smile before leading me to the third deck, where he pushes open a dark wood door to reveal my suite. The accommodation is palatial by cruise-ship standards: a nearly 600-square-foot stateroom with a sitting area, a king-size bed, and a bathroom where oversize windows ensure I’ll never miss a moment on the Nile—not even while showering. The room must seem massive to Noureldin as well; he remembers the Philae from its old days, back when rather than 22 staterooms, it featured 58 cramped cabins. He also remembers the boat’s days in Cairo, waiting for renovations that came in fits and starts over nearly 5 years. “I didn’t miss a day,” he tells me. “I’ve been doing this for 32 years and draw warmth from it.”

Seeking some warmth of my own, I wander up to the sundeck for a proper Egyptian lunch of falafel and labneh, and ponder what treasures lie before me as the Philae sails from Luxor to Aswan over the next week. I imagine days of tombs and mummies and nights of steaks and whiskey. At sunset I’ll bob around in the swimming pool, watching the river turn black and the sky fade to sepia. After dinner I’ll trade wild tales of exploration with the other passengers over cigars in the lounge.

Except, looking around, I realize there are no other passengers.

“Where are the other guests?” I ask Noureldin.

“Even if I have just one cabin booked, I will sail,” my host responds. “I take pride in that.”

Though admittedly selfish, I can’t deny that it’s rather nice to have the Philae all to myself. There’s no waiting for a cocktail at the bar, no need to make an appointment at the spa, and certainly no worry over finding a lounge chair at the pool.

The idea of having Egypt all to myself, however, strikes another chord entirely. Before the Philae sets sail, Egyptologist Tarek El Shimy guides me to Luxor’s Karnak Temple Complex, where we are dwarfed by the giant stone pillars of the Great Hypostyle Hall. Statues 60 feet high stand in classic mummy stance, and paintings of stars against a blue sky remain as they have for thousands of years. Contributing to the hugeness of the space is its relative emptiness. I stop and lean into a shadow to watch a trio of men in flowing galabeya drift past the enormous statues of Amon. All is pin-drop quiet until a commotion—a group of Chinese tourists—arrives, cameras in hand.

Chinese visitors do still come, El Shimy tells me, but American ones increasingly do not. Between warnings issued by the U.S. Department of State and travel bans imposed by the Trump administration, it’s easy to understand the hesitation. But the Egyptian government is eager to assuage concerns, increasing security in airports and at historical sites and other tourist destinations. And while some remote areas of the western desert remain active military zones, Nile sailings take place on the eastern border, hundreds of miles away. In fact, a cruise on the Philae might be the safest trip you can take in Egypt.

Americans who do come to Egypt will find the country’s citizens as friendly as ever, largely untainted by world politics. “Egyptians make a very big distinction between the American people and the American government,” says Omar Samra, an Egyptian adventurer and motivational speaker. “If you came to Egypt now, you would see no difference in terms of treatment.”

To be sure, as the Philae meanders its way from the Valley of the Kings (where I visit King Tut’s tomb) to Edfu (where I ride through the streets in a donkey-drawn carriage) and on to Aswan (where I tour the Temple of Philae), I encounter some of the warmest people I’ve ever met.

“Where you from?” I hear again and again.

The locals’ enthusiasm may be partly explained by my relative rarity as an American tourist—a rarity that rewards me throughout my journey.

On my last evening aboard the Philae, I take a solo dip in the top-deck swimming pool and absorb the magic of the Egyptian night. The dusty streets of Aswan sparkle with the eerie orange cast of street lamps, and the air smells faintly of wood smoke. In the distance, the whiny notes of a musical horn pierce the silence. Below, the Nile sloshes back and forth just beyond the boat’s rails.

Alone once again, I consider the Egyptians who have called this river home for thousands of years and have left behind vital messages in their statues, temples, and monuments. This week I may have had these treasures all to myself, but Egypt’s appeal is unflinchingly eternal, and Americans—and the world—will soon come back. (oberoihotels.com)

From the River to the Red Sea

The oberoi Philae sails between Luxor and Aswan—with stops at the Valley of the Kings and the Temple of Edfu along the way—on 4- and 6-night itineraries. Panoramic river views are assured in all 22 staterooms, but for more space and a private balcony, stay in one of the terrace suites (from $1,463 per night). Onboard diversions include a cigar lounge, a movie theater, a spa, a fitness center, and a top-deck swimming pool and alfresco restaurant. Cuisine at the fine-dining restaurant is a blend of Middle Eastern, Western, and Asian fare.

Travelers looking to recover from jet lag before a cruise or regain their land legs after one should head to Oberoi Sahl Hasheesh on the Red Sea coast. The 48-acre all-suite resort offers prime pampering in its 2,500-square-foot spa, as well as active endeavors like scuba diving and snorkeling in the nearby Sharm El Naga marine reserve.