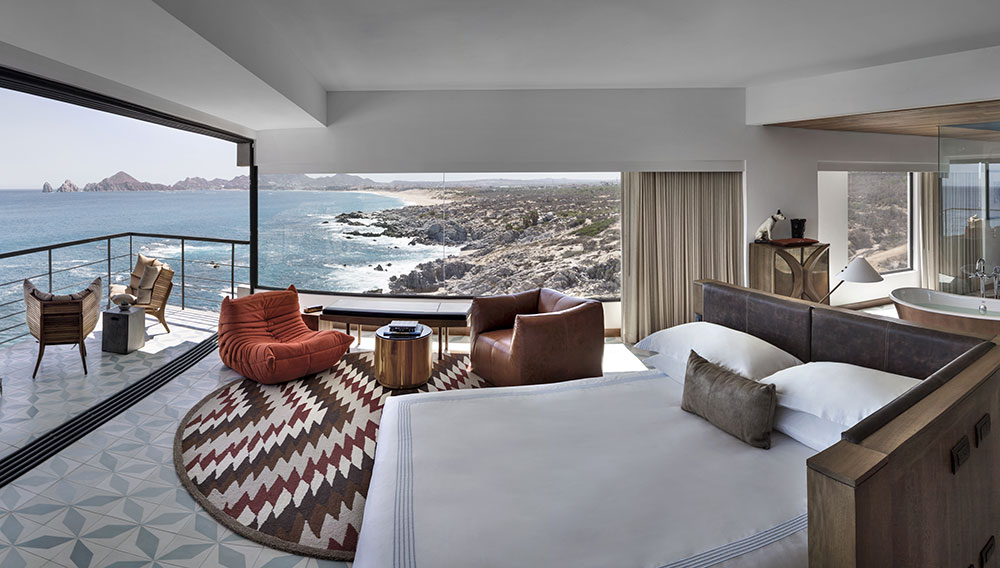 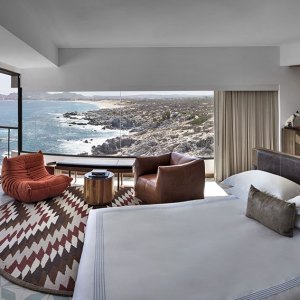 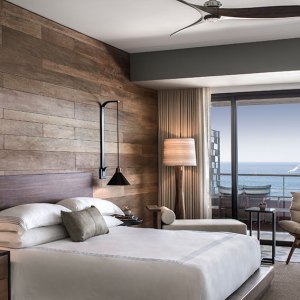 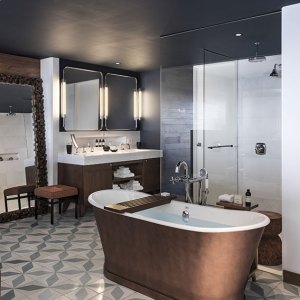 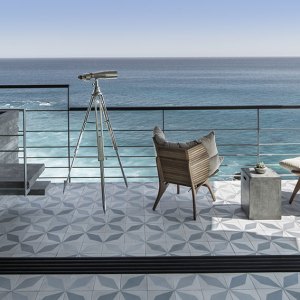 As Los Cabos continues its long recovery from the damage caused by last year’s devastating Hurricane Odile, the region’s top resorts are finally up and running—and better than ever. Joining the ranks of the luxury properties lining the Los Cabos corridor is Cabo San Lucas’s first post-hurricane grand opening: the Cape, a Thompson Hotel (from $599 per night).

Opened in June, the resort, which sits near the southernmost tip of the Baja California Sur peninsula, brings a stylish new vibe to the region, skipping the Spanish-colonial decor typical of its popular resorts in favor of a modern—and slightly retro—look that blends dark wood paneling and contemporary furnishings. In the 161 rooms and villas (the latter of which debuted on August 15), vintage surf photography, leather pillows, and copper-leafed bathtubs punctuate sleek and minimal interiors. Still, the hotel’s style is steeped in the traditions of Mexico, featuring colorful hand-painted tiles by local artisans and artworks by the Mexican ceramist José Noé Suro.

The Cape’s of-the-moment style also delivers a contemporary twist on the traditional Los Cabos experience. In the spa, black walls and floors provide a rare absence of visual stimulus, allowing guests to focus on the sounds of the ocean and the blowing wind. Manta, the resort’s Mexican-fusion restaurant helmed by Enrique Olvera, breaks from the usual with a menu that brings Peruvian and Japanese influences to the local cuisine. Olvera, whose acclaimed restaurants include Mexico City’s Pujol and Manhattan’s Cosme, also oversees the Cape’s other dining venues, including the beach house–style restaurant Ledge.

Perhaps most indicative of the resort’s laid-back surfer scene, however, is its breezy lobby, where a giant whale sculpture composed of driftwood collected in Odile’s aftermath overlooks the waves of Monuments Beach and, in the distance, Cabo’s iconic El Arco rock formation. (thompsonhotels.com)