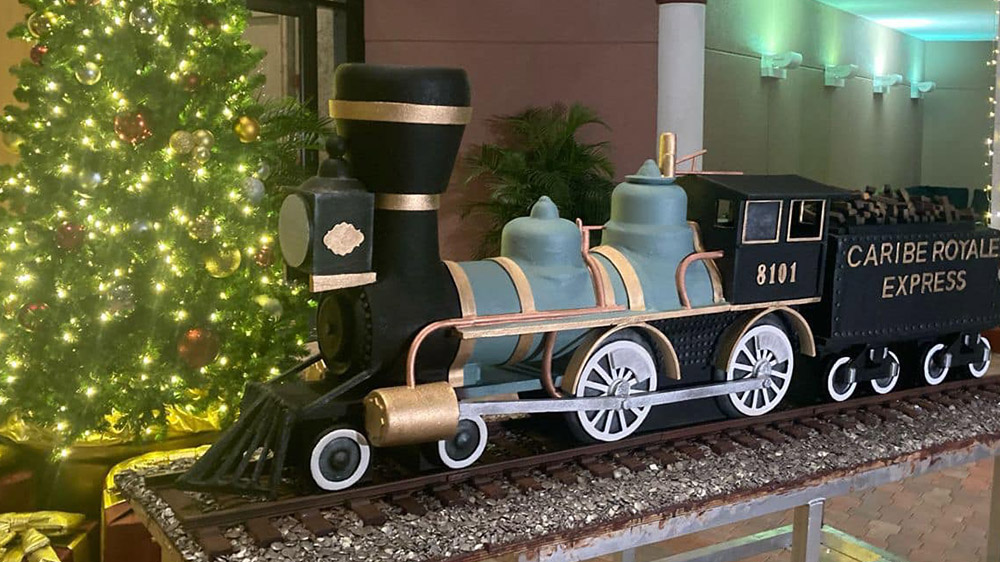 A simple model train wasn’t festive enough for one Florida hotel’s Christmas setup. The resort needed something a little more magical—and edible, it turns out.

That’s why the centerpiece of Caribe Royale Orlando’s 2021 holiday decorations is a stunning 32-foot train made of chocolate, according to Travel + Leisure. Even more impressively, the entire choo choo—from its cars to its passengers to the rocks beneath its tracks—is made from the cocoa bean confection.

The model, officially dubbed the Caribe Royale North Pole Express, is the brainchild of the resort’s executive pastry chef Joshua Cain. He told T&L that his creation was directly inspired by two steam locomotives from the 1800s—the Central Pacific Railroad’s Jupiter and Virginia and Truckee Railroad’s No. 12 Genoa train. We’d be willing to wager childhood memories of The Polar Express may have also played a part.

The delicious holiday model required plenty of work to bring to life. The pastry chef said he and two other members of his team spent over 1,000 hours building the train by hand. The vehicle, including a few stowaway snowmen, tips the scales at a whopping 1,600 pounds, and some 800,000 cocoa beans went into its creation. As for its nutritional value, the resort estimates there’s well over four million calories in all that chocolate.

If Cain has his way, though, this is just the beginning. “Every year I want to keep the tradition alive by adding more to the train,” he said in a video posted on the resort’s website. “Add on to the display, create something new for our guests to come and see every year. ‘Oh, look what they add this year. Oh, look at that!’” And hey, maybe even go for the record one year.”

There’s a lot of work to be done before the Caribe Royale North Pole Express can earn itself a spot in the record books, though. The title for longest chocolate sculpture, according to Guinness World Records, belongs to a 111.5-foot model crafted by chocolatier Andrew Farrugia in 2012—a mark Cain, we assume, already has in his sights.