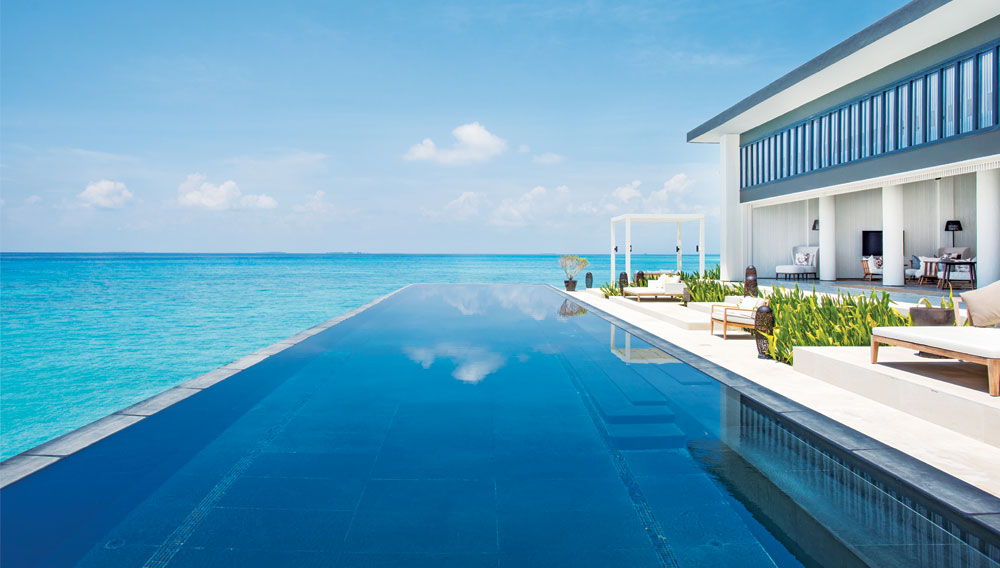 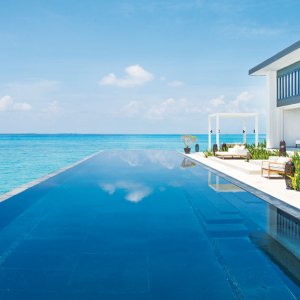 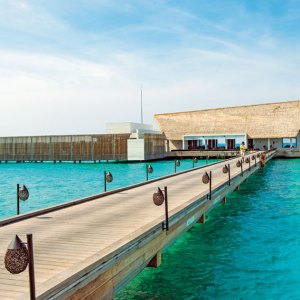 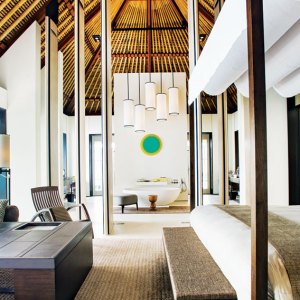 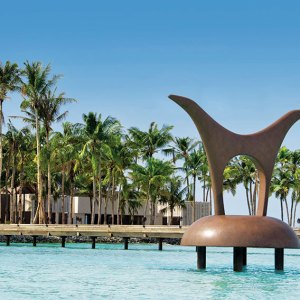 With its unhurried expansion of the Cheval Blanc brand, LVMH is slowly but surely redefining the concept of a luxury hotel.

It is one of those quintessential Maldivian afternoons in which a single fluffy cloud sails across the sky like a slow-moving ship and the slender palm trees seem to stretch to the sun. My fantasy island—a football field–sized patch smothered by a mound of snow-white sand—is silent save for the whisper of a light breeze and the churning of the rising tide. I flatten myself across the surface of a daybed, attempting to lure the low sun’s rays onto every square inch of my body, and slowly drift off to sleep.

Pop! The cheerful explosion of a fresh bottle of Champagne snaps me back to reality, in which my island for one is actually Cheval Blanc Randheli, an exquisite new resort in the Maldives’ Noonu Atoll. Propping myself up against a bright yellow pillow, I scan the beach for the source of the sound. To my left and right, the fingerlike shadows of palm trees line empty white lounge chairs. Behind me, the turquoise swimming pool ripples only from the wind.

“Madame,” says my majordome, or butler, appearing suddenly at my side to place a bubbling flute in my hand. “I thought you might be thirsty.”

To be sure, the maisons of Cheval Blanc, the hotel brand of the French conglomerate LVMH Moët Hennessey Louis Vuitton, present a spectacular version of reality. Cheval Blanc Randheli, which opened last November as the brand’s second property, immediately raised the bar in the Maldives—a country already flush with extravagant properties. The resort and its predecessor, Cheval Blanc Courchevel, are certainly not unique in the world of fashionable travel; Bulgari, Armani, and other high-luxury houses have all debuted their own hotel chains in recent years. LVMH, however, is slowly but surely—and unsurprisingly—establishing its particular brand of hospitality as the standard bearer in the field, if not for luxury hotels in general.

LVMH’s first property opened in 2006 in the tony French Alps resort of Courchevel 1850, where Bernard Arnault, the conglomerate’s chairman and CEO, transformed a mountaintop chalet in the Jardin Alpin area into an haute-couture sanctuary. Extravagant details were in excess, from the atelier filled with Louis Vuitton products to the 37 rooms and suites adorned with miles of silk, leather, velvet, and fur. Stationed near the entrance to the maison (LVMH’s preferred term for its properties), a mirrored horse sculpture was erected as a symbol of the new hospitality brand, whose name is a reference to the group’s 150-year-old Château Cheval Blanc winery in St.-Émilion.

At the time, LVMH had been broadening its reach in the luxury world at a rapid pace. In the previous decade alone, it had acquired the Scottish whisky distiller Glenmorangie, the Dutch yacht manufacturer Royal Van Lent, Donna Karan International, and Tag Heuer, among others. The group had also announced plans, in 2001, to create Paris’s Fondation Louis Vuitton, a Frank Gehry–designed art museum that opened this October. The conglomerate’s aggressive expansion, however, did not carry over to its nascent hospitality brand. “Courchevel proved to be incredibly successful, but we knew we were entering a competitive world,” says Olivier Lefebvre, head of hotel activities for LVMH Hotel Management. “While it was an obvious extension for us as a luxury brand, it was important to us to get everything right before we went any further.”

Seven years after the formation of the Cheval Blanc brand, its private-island resort in the Maldives opened to resounding acclaim (including being named Robb Report’s Best of the Best resort in the June 2014 issue). Cheval Blanc Randheli stands apart in the island nation for its modern Jean-Michel Gathy design, its wine cellar filled with rare vintages of Château Cheval Blanc, and its spa featuring treatments by Guerlain, but most of all for the well-curated accoutrements and services that make the property an extraordinary home. Vibrant marble and quartz sand artworks that hang above the bean-shaped bathtubs in every villa are each part of a one-of-a-kind commission by the French artist Vincent Beaurin. Aboard the 45-villa resort’s custom seaplane, which is outfitted with calf-leather seats and a glossy yellow-and-taupe color scheme, monogrammed espadrilles and colorful canvas beach bags await

A similar attention to detail—a hallmark of LVMH’s many product brands over the years—can be found at Cheval Blanc Courchevel, where a Mongolian yurt has been transported and transformed into a cigar lounge, and a high-profile art collection includes photographs by Karl Lagerfeld and a bronze teddy-bear sculpture by Takashi Murakami called Kanye Bear (a tribute to Kanye West). Tastefully absent from plain sight, however, is the prominent stamp of LVMH’s most recognizable brands: Linens are free of logos, toiletries are displayed sans high-profile labels, and exclusive offerings such as the hotel’s private consultations with Guerlain’s creative director, Sylvanie Delacourte, are carried out subtly and without fanfare. “We consider Cheval Blanc a laboratory for services rather than just a showcase for our brands,” Lefebvre says. “You would never see the same furniture or artwork in any two of our properties, because every maison is completely unique.”

In keeping with Cheval Blanc’s mission, Lefebvre cites grand yet carefully calculated plans for the future. Currently in various stages of development are a retreat in Oman and a private-island resort on the Nile River in Aswan, Egypt. In 2012, Cheval Blanc announced plans to build its first city hotel, within Paris’s former La Samaritaine department store. The company also aims to open a resort in Mexico, in the exclusive Costa Careyes region south of Puerto Vallarta.

For its third maison, Cheval Blanc took on an existing property, transforming the 40-room Hotel Saint-Barth Isle de France to Cheval Blanc St-Barth Isle de France. According to Lefebvre, the legendary Caribbean resort—known for its weekly fashion shows and glamorous Flamands Beach locale—was a natural addition to the collection. “We knew we needed to be on St. Barth, but we also knew we could not build something new on such a small island,” he says. “Isle de France is the best, so it was obvious where we would go.”

The hotel, which the company acquired in the summer of 2013, reopened in October with a spa featuring treatments by Guerlain, an expanded pool area, and the top-notch services of Cheval Blanc’s majordomes. Future plans call for the addition of a fitness center and four beachfront suites. Interior decor in the existing rooms has also been upgraded to match the subtle luxuries found at Courchevel and Randheli.

The enchanting unreality I first experienced at Cheval Blanc Randheli returns one brilliant afternoon on Isle de France’s pristine stretch of Flamands Beach. Sipping a mango smoothie, watching the shadow cast by my umbrella tiptoe farther and farther down the shoreline, I succumb to the hypnosis once again. This time, however, the chill of sundown is my wake-up call. Parched for something stronger than a smoothie, I hazily tread the cool powdery sand toward the resort’s evening bonfire, where padded sofas and tables topped with blooming hydrangeas are arranged at the receding water’s edge.

“Am I too early?” I ask the maître d’ upon discovering that I have the place all to myself. “Of course not,” he responds, leading me to a cozy seat with a view of the sunset. I stare out at the swirling mosaic of oranges and reds reflected in the sprawling sea before me when, suddenly, pop! The cork flies behind me, right on cue.