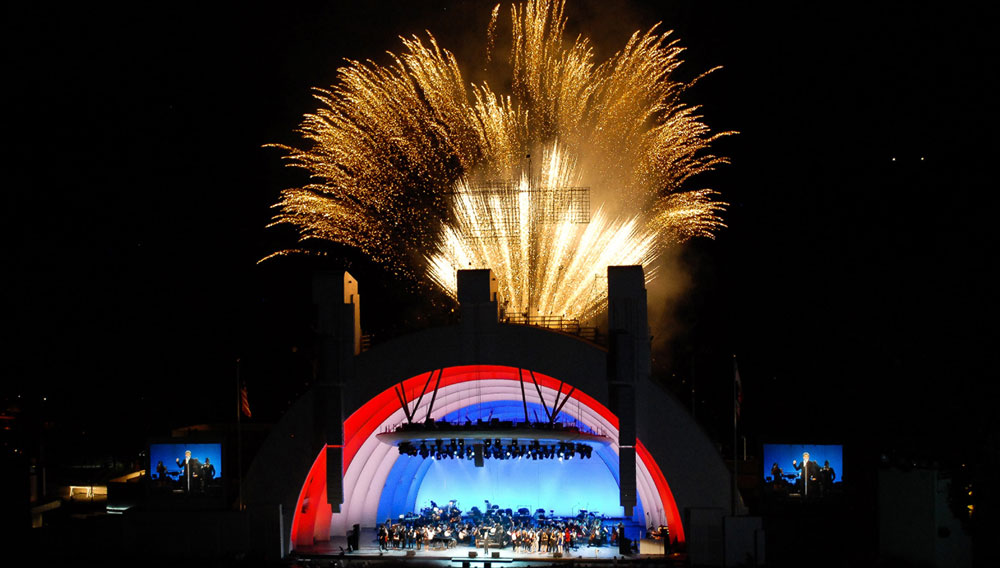 Every year, one of the best places in Los Angeles (and perhaps on the whole West Coast) to celebrate Independence Day is at the Hollywood Bowl’s July 4 Fireworks Spectacular. This year’s headliner is the Motown icon Smokey Robinson who—along with his backup band for the show, the world-famous Los Angeles Philharmonic—promises an unforgettable musical experience. For its Fourth of July Fireworks package, the Four Seasons Los Angeles at Beverly Hills is offering a chauffeured ride to and from the show, and much more.

The package includes a two-night stay in one of the hotel’s one-bedroom suites—featuring a king-size bed (and a pull-out sofa), a roomy living area, and two bathrooms, one equipped with a deep soaking tub and the other with a walk-in shower—for as many as four guests. On the evening of the Fourth, the Four Seasons will equip the guests with all the necessary accoutrement for enjoying a show at the Hollywood Bowl: one bottle of fine wine and a gourmet picnic-basket dinner prepared by the Four Seasons’ chefs. The hotel will chauffeur the guests in a luxury sedan or SUV to the 17,000-plus-seat, open-air concert venue, where they can wine and dine right at their seats, in a private terrace-level box for as many as four people.

As an apt Independence Day encore to an evening of classic Motown and R & B performed by Smokey Robinson and the L.A. Phil, the Hollywood Bowl’s spectacular fireworks display will cap the concert. After watching the show, the Four Seasons will chauffeur guests back to the hotel, where they can take in panoramic views of the L.A. skyline from their suite’s private patio.

The Fourth of July Fireworks package is priced from $1,600 per night, with a minimum stay of two nights; reservations must be made at least 14 days in advance. (310.273.2222, fourseasons.com)